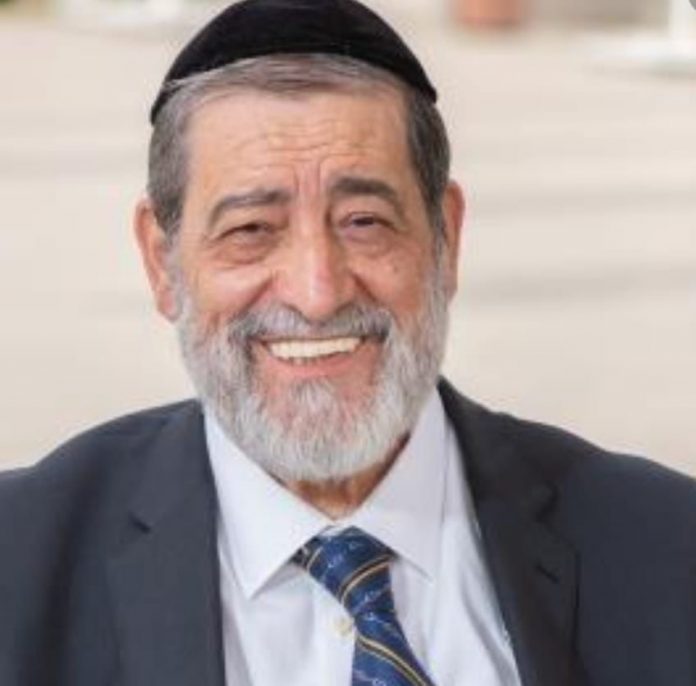 Rabbi Avraham Hamra, the chief rabbi to Jews from Syria and Lebanon, died on Friday. HaRav Hamra, who was the last Chief rabbi of Syria, was 78, according to a report on the Israel National News web site. The funeral was held in Holon on Friday at 3 p.m.

“I received with great sorrow the news of the death of Rabbi Avraham Hamra. Rabbi Hamra oversaw kashrut, marriage and education of the Jewish community in Syria, while he formed friendly relations with the president, helping to preserve the community,” said Chief Rabbi Yitzhak Yosef, according to the INN report.

He added that: “From the time he moved to Eretz Yisrael, he was moser nefesh for the members of the community in Syria in order to bring them to Eretz Yisrael and was active in the preservation and elevation of the glorious Jewish traditions of these communities.”

INN reported that HaRav Yosef said that Hamra was instrumental in bringing Syrian Jews to Israel and helping their communities and culture continue.

The niftar was born in Syria, where he began leading the community as a young man, and tended to all the needs of the Jewish community with great mesirus nefesh, including kashrus, marriage, araba minin, gittin and levayos, as was reported on the Yeshiva World News web site.

Ha”Aretz reported that Rav Hamra also worked with the Mossad to smuggle Jewish artifacts – such as ancient Torah scrolls and manuscripts out of the country. In his later years, he was also involved in supporting other Jewish communities in the Arab and Muslim world.

Speaking to The Forward, Rabbi Mendy Chitrik, the Istanbul-based Director of the Alliance of Rabbis in Islamic States said, “Rabbi Hamra was the last chief rabbi of Syria, and as such intimately knew the needs of Jews in Muslim countries. Although his health was deteriorating due to his illness, he was always there to answer questions and give advice.”

HaModia reported that HaRav Hamra’s daughter Mrs. Aliza Azan, a”h, and three of her children,  Moshe, 11, z”l; Yitzchak, 7, z”l; and Henrietta, 3, a”h were tragically killed in a 2017 fire on Chanukah at their home on East 14th Street, between Avenues S and T in the Gravesend section of Brooklyn.

A son of Rav Hamra is a prominent chazzan in Har Halebanon shul in Midwood.