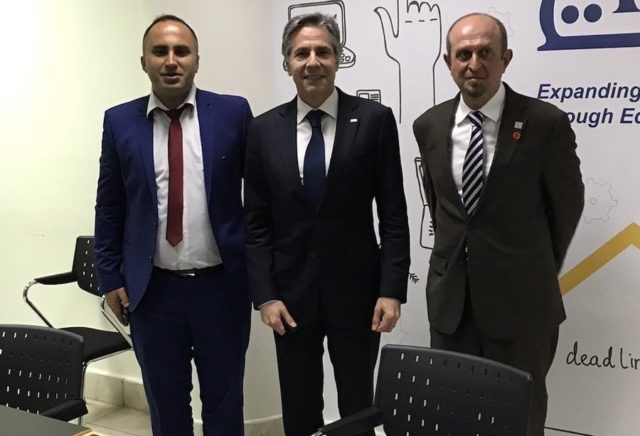 By Joel B. Pollak

U.S. Secretary of State Tony Blinken met Tuesday in Ramallah with a Palestinian activist who urged him to use the word “apartheid” in reference to Israel and asked the U.S. to end arms sales to Israel, as well as financial and diplomatic support.

Issa Amro, who described himself in a press released as a “grassroots Palestinian activist,” met Blinken on his recent visit to the region, along with State Department official Hady Amr. (Breitbart News has previously reported Amr’s anti-Israel views.)

In a press release, Amro said:

In the meeting, which was with members of Palestinian civil society, Amro asked the Secretary of State to end unquestioned U.S. financial and diplomatic support for Israel. “I told him that without making Israel’s occupation costly, nothing will change,” Amro said. “It is a one-state reality of apartheid.” … Amro said the meeting with Blinken was productive and described Blinken and Amr as compassionate and concerned.

Amro also opposed a $735 million arms sale to Israel, claiming that Israel had “carried on an attack on the Gaza strip.”

The false claim of “apartheid” is an accusation hurled at Israel ever since the United Nations World Conference Against Racism in Durban, South Africa, in 2001, which was noted for its antisemitism. The accusation is aimed at isolating Israel.

The Legal Insurrection blog noted Amro’s history as a radical activist in 2017, reporting that he has called for a third “intifada,” has posted messages sympathetic to Palestinian terrorism, and has shared antisemitic rhetoric on social media.

President Joe Biden billed Blinken’s visit to the region as part of “efforts to rebuild ties to, and support for, the Palestinian people and leaders, after years of neglect.”

Palestinian leaders refused to negotiate with Israel during both the Obama and Trump administrations, and refused to stop paying stipends to terrorists and their families, leading to U.S. funding cuts under the Taylor Force Act. Trump also reduced funding to the UNRWA over concerns that it supports extremism.

The Trump administration also shuttered the Palestine Liberation Organization (PLO) office in Washington, DC in 2018, pursuant to a U.S. law requiring the office to be closed if the Palestinians tried to sue Israel at the International Criminal Court. Later, the Palestinian Authority turned down Trump’s peacemaking efforts, even when offered $50 billion in investment assistance.

Joel B. Pollak is Senior Editor-at-Large at Breitbart News and the host of Breitbart News Sunday on Sirius XM Patriot on Sunday evenings from 7 p.m. to 10 p.m. ET (4 p.m. to 7 p.m. PT). He is the author of the new e-book, The Zionist Conspiracy (and how to join it). His recent book, RED NOVEMBER, tells the story of the 2020 Democratic presidential primary from a conservative perspective. He is a winner of the 2018 Robert Novak Journalism Alumni Fellowship. Follow him on Twitter at @joelpollak.