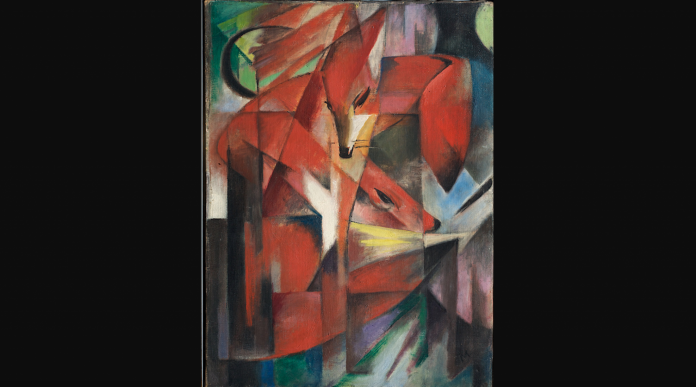 As the yet unresolved matter of looted Nazi art consistently crops up in headlines around the world, it was reported last Friday that a precedent for German claims of restitution could possibly be set. As was reported by the Jewish Telegraphic Agency, the city of Dusseldorf, Germany has entered into an agreement in which they will return a piece of art whose approximate worth is $18 million to the descendants of its original owner.

The title of the painting is “The Fox” and was created Franz Marc, a pioneer of the German Expressionism mode, according to the JTA report. The original owner of the painting was a German based Jewish art collector and businessman named Kurt Grawi.  Subsequent to his deportation to the Sachsenhausen concentration camp in 1938 and the previous years in which he was persecuted by the Nazi regime, Grawi escaped the horrors of the Third Reich in 1939, according to the JTA story. He set sail for Chile with his wife and stepchildren as many European Jews sought refuge in South America during and after the nightmarish Holocaust years.

JTA reported that lawyers representing the family of the descendants said that when Grawi made his exit from his native war torn country, he was only given permission to only bring a suitcase with personal affects as well as a small amount of currency. The report indicated that the Nazis considered the painting “degenerate art” and thusly it was ferried out of Germany with the assistance of friends.

According to information on the German Lost Art Foundation web site, in 1939, Grawi’s wife, who was not Jewish, sold the Berlin properties that had been signed over to her and organized the family’s emigration to Chile that same year. Also in 1939, Kurt Grawi wrote that his intention was to sell the painting to cover the cost of his emigration, according to the JTA report.

Kurt Grawi died from cancer in Chile in 1944. After the war, Else Grawi made claims for restitution and compensation through the relevant programs. There is strong evidence that Kurt Grawi last had the painting in his possession in 1936. The work then reappeared in New York in 1940 and was under the ownership of someone named Ernest Simon. Simon was a German-Jewish businessman who had held American citizenship since 1933. As for the link between Grawi and Simon, it has not yet been possible to piece together whether they were connected to each other in Berlin through work (they worked in a very similar field), through family or through Jewish circles.

The German Lost Art Foundation web site stated that it was subsequently sold to a new and unknown buyer via Galerie Nierendorf of New York. The painting was mentioned in “The Story of Modern Art” by Sheldon Cheney in 1941 with a reference to Nierendorf.

Prof. Klaus Lankheit, author of two publications of 1950 in which “Foxes” is mentioned and later the author of “Franz Marc: Katalog der Werke” (1970), notes that the Dieterles owned the painting in 1939. However, documents relating to the Dieterles suggest that they first acquired it in 1940 from Nierendorf. The connection between the Dieterles, Nierendorf and Schardt is confirmed by the research as the latter two had knowledge of Grawi’s former ownership of the artwork.

JTA reported that in 1962, the painting made its way to the Dusseldorf based Kunstpalast Art Museum, when it was donated by its new owner.

The return of Nazi-era stolen cultural property is within the bailiwick of the Germany Advisory Commission, however, they do not deal with cases in which a piece of art as been sold outside of Germany, as was reported by the JTA.

With a two-thirds majority vote, the recommendation was made by the commission that the artwork be returned to the heirs of Kurt Grawi, as was reported by the JTA. They stated that it was irrelevant that a sale of the painting was conducted outside of Germany because they concluded that the sale of the painting only took place because Grawi was targeted by Nazi persecution and that he would not have sold it under his own volition.

In a closed session last Thursday, the Dusseldorf City Council agreed to return the artwork to the Grawi descendants, as was reported by the JTA. There were no objections. One abstention was registered by the far-right Alternative for Germany party, or AfD.

JTA reported that the decision made by the commission “may set a precedent by which cultural objects sold abroad could be subject to restitution under the Washington Principles, a 1998 agreement with Germany that set standards for determining whether property was looted or sold under duress.”

Speaking to JTA, Markus Stoetzel, a Germany-based attorney for the Grawi heirs, said that the item need not be spectacular to qualify for return.

“It is not always a Franz Marc painting,” he told JTA in a phone interview. “It can be a book or a piece of furniture that has a connection to the past, to what they lost.”

JTA reported that Stoetzel added: “One can only hope that this is encouraging for other parties and countries to come forward.”