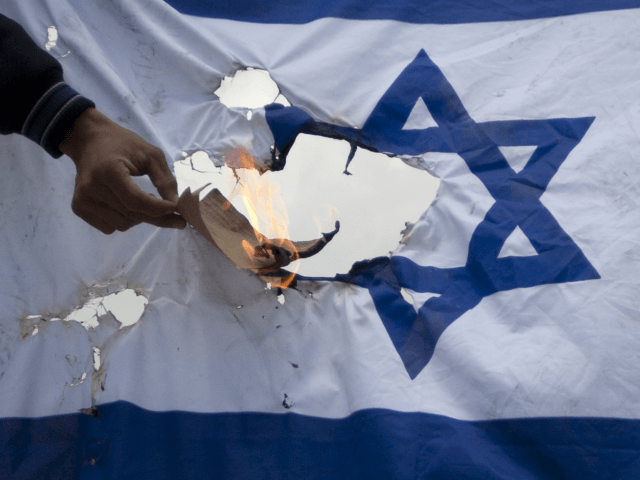 The Israeli flag hoisted outside of Düsseldorf’s city hall was set on fire in the latest instance of flag burning in Germany since the start of the conflict in Israel earlier this week, with similar protests in Milan, Italy.

Israeli flags had been flown in cities across Germany this week to commemorate the establishment of diplomatic relations between West Germany and Israel, which occurred on May 12th, 1965.

The flag outside of Düsseldorf’s city hall was set on fire on Thursday evening. Police and state security officials have since taken the flag and are conducting forensic tests on it as part of their investigation, according to German tabloid Bild.

Mayor of Düsseldorf Dr Stephan Keller hoisted a new Israeli flag on Friday morning, remarking: “The attacks on Jewish life, such as the arson attack on the Israel flag at Düsseldorf City Hall, are intolerable and are condemned by us in the strongest possible terms.

“I want to assure the Jewish community that the city of Düsseldorf stands firmly by the people of the Jewish faith and by the side of the State of Israel.”

Thursday night also saw an attempted burning of an Israeli flag in Berlin in front of the town hall of the borough of Pankow. Police say that the suspects, yet to be identified, pushed a garbage dumpster under the flag and lit it in an effort to catch the flag ablaze, but no damage was caused.

On the same day, the Israeli flag flying outside of the city hall in Solingen was also burned in an act the mayor called “disgraceful”.

“Anyone who thinks that they can shake our solidarity by burning a flag is mistaken. We resolutely oppose the hatred against Jewish people, which is currently more and more evident,” Mayor Tim Kurzbach said.

Earlier this week in Bonn, an Israeli flag was burned outside of a synagogue and protesters are said to have thrown rocks at the entrance to the building, causing damage.

The incidents come just days after the memorial to the Great Synagogue on Kasernenstrasse in Düsseldorf was subject to an arson attack, as well.

Germany is not the only country to see flag burnings as conflict continues between Israel and the Palestinian terrorist group Hamas.

Silvia Sardone, a member of Matteo Salvini’s League and Member of the European Parliament, said of Thursday’s protest: “Yesterday’s anti-Israel demonstration, with thousands of people present, was punctuated by unacceptable moments.”

“On more than one occasion, there were shouts and chants of ‘Allahu Akbar’, and the Israeli flag was burned in the crowd,” Ms Sardone said.

She also criticised the inaction from Milan’s leftist Mayor Beppe Sala, claiming he was “non-existent” because he was “probably afraid of offending some of his supporters”