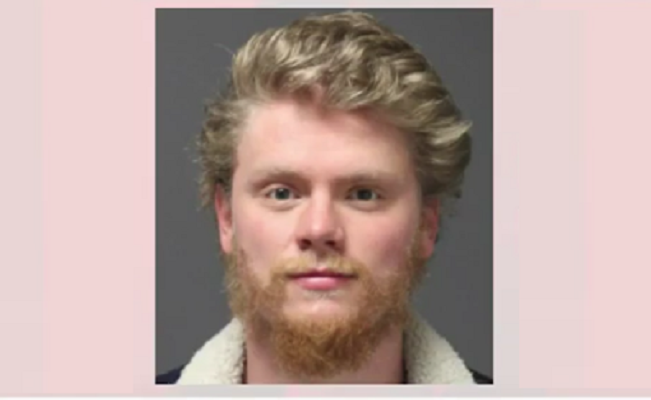 A UConn student has been charged with a hate crime after police say he painted a swastika on a campus building at the start of the Passover holiday.

Kristopher Pieper, 21, a junior from Enfield, Connecticut, was being held Thursday in lieu of a $5,000 bond on charges including intimidation based on bigotry or bias and criminal mischief. It was not immediately clear if he has hired an attorney.

He’s accused of painting the anti-Semitic symbol on the school’s chemistry building, which is located directly across from UConn Hillel, the Jewish student organization, on March 27.

He has not been charged in a second incident, in which similar anti-Semitic graffiti, including another swastika and a second Nazi symbol, were found two days later on another building down the road from Hillel House.

Police were able to link him to the graffiti on the chemistry building using video from the campus surveillance system, swipes from Pieper’s school identification card, and data from UConn’s wifi network identifying his phone in the area, according to an arrest warrant.

During questioning, police said Pieper gave them a 10-page statement which he called an apology, in which he said he was upset with certain Jewish religious practices, including circumcision.

“I do not hate Jews, I am critical of them,” he wrote.

Pieper, an anthropology major, also faces university sanctions, but the school declined to say what those are, citing federal privacy laws. University President Thomas Katsouleas sent a letter to the university community Thursday in response to the arrest.

“Every member of our community – students, faculty, staff, alumni, and guests – deserves to feel safe and respected at UConn,” he wrote. “Anyone who violates that principle goes against the values this university exists to uphold.”

Edina Oestriecher, the executive director of UConn Hillel, said there have been seven reported antisemitic incidents on campus this school year, including acts of graffiti and at least one assault on a Jewish student, who was attacked by several men while walking home from a Passover Seder, she said.

“It’s been certainly an upsetting time,” she said. “We’re relived to know that an arrest has been made, at least in connection with one of the incidents