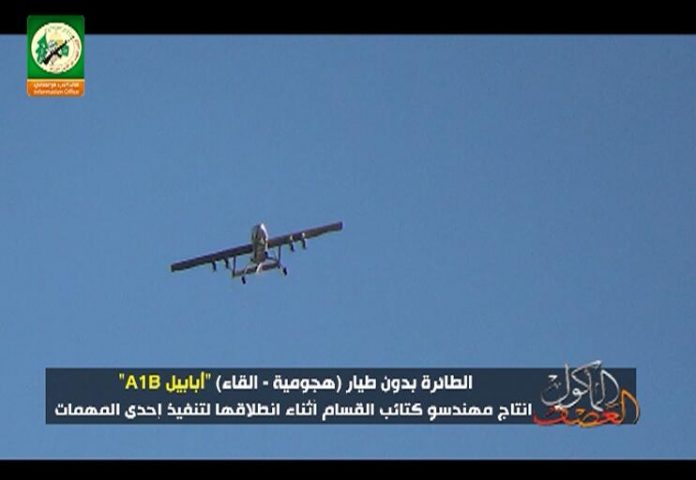 As rocket attacks continue unabated from Hamas and Islamic Jihad terrorists in Gaza, it was reported on Thursday that the Iranian-backed terror group launched bomb-laden suicide drones into Israel as military footage showed fighter jets blasting them out of the sky. Hamas says its new drones are called “Shehab.”

The Sun of the UK has reported that the lethal drones were allegedly carrying around five kilograms of explosive payload and were intended to avoid Israel’s Iron Dome missile system. Thus far in this bloody conflict that was initiated by Hamas, the terror group has launched many drone attacks from their Gazan enclave. Sources at The Times of Israel have reported that the drones previously launched were downed by Israel’s anti-missile system. The Israeli army has not provided confirmation of the report,

Those familiar with the drone that caused such massive damage have said that it is shares similarities to the killer drones used by Iran. Experts in military hardware have said it is no surprise that Iran has supplied Hamas with these lethal drones.

A report in The Mail from the UK hinted that Hamas’ strategy has been to try and overwhelm the Israel’s Iron Dome. Israeli military claim it has executed a 90-95 per cent success rate. Hamas’ militant wing, the Al Qassam Brigades, says that these were developed and built locally, but, while they are smaller, they also have some broad similarities to designs of Iranian origin that have been employed extensively by the Houthis in Yemen, according to a report on thedrive.com web site.

The Jerusalem Post’s Seth Frantzman similarly reported that “these drones appear to be based on Iranian Ababil drones, models of which have been exported to the Houthis in Yemen, and which the Houthis built and used against Saudi Arabia. The US has warned for years about the Iranian drone threat, including putting Iran drones on display in Washington.”

The IDF said on Wednesday that it “struck a squad of terrorists operating explosive UAV launchers belonging to the Hamas terrorist organization in the Gaza Strip. The squad was struck while they were preparing to launch the UAV into Israeli territory.” They added that their orders were to intensify operations, according to the report in The Sun. Lieutenant Colonel Jonathan Conricus added: “We will continue to operate to attack military infrastructure and prepare additional activities until they get the message.”

Israel has prepared combat troops along the Gaza border in “various stages of preparing ground operations”, a military spokesman said.

The exact origins of the Shehab, a relatively small pusher-prop design with a tubular central fuselage, a low-mounted rear wing, and a high-mounted canard-type forward wing, are unclear, according to the report on thedrive.com

Drones can carry warheads and also move slowly and may maneuver, according to the JPost report. Most of the Iranian-style drones, which are called “loitering munitions” or “kamikaze” drones, are the kind that can be programmed to fly to a certain destination and then sent on their way.

They are launched from a rail and can be transported on a truck or even a boat and launched that way. The JPost report indicated that they have a propeller at the back, and gyroscope technology used in the drones for guidance links Iran to the drone exports that have gone to Yemen, Iraq, Syria, and even further afield, to be used in places like Sudan, Afghanistan, and Venezuela, according to various reports.

Since the eruption of the violence that has gripped the region since early in the week, Israel has heavily relied on the Iron Dome anti-missile system to ward off the rocket barrages launched by the Iranian-proxy terror group. The Iron Dome system is not only mobile but has the ability to intercept rockets in all weather conditions.

Hamas and Hezbollah have been developing and operating drones targeted at Israel for almost a decade, according to a detailed report by the Center for the Study of the Drone at Bard College web site. In 2004, an Iranian-made drone operated by Hezbollah managed to fly in Israeli airspace for five minutes before it crashed into the Mediterranean sea. The 2.9 meter long UAV was not picked up on Israeli radars. The incident prompted the Knesset to convene a hearing with the IDF Chief of Staff Moshe Ya’alon.

The Center for the Study of the Drone at Bard College web site’s report stated that during the Lebanon War in 2006, Hezbollah launched a number of Iranian-made drones into Israeli airspace, most of which the IDF managed to shoot down. In July of that year, Hezbollah packed a small drone with explosives and rammed it into an Israeli warship, causing a fire that took several hours to put out. In August of that year, Israel shot down a Hezbollah drone in northern Israel that was carrying roughly 30 kilograms of explosives.

In 2010, Hezbollah Secretary General Hasan Nasrallah displayed what he claimed where images from an Israeli drone video feed that he said his organization had intercepted in 1996, according to The Center for the Study of the Drone at Bard College web site.

In late 2010, Head of the Counter-Terrorism Bureau in Israel, Brigadier-General Nitzan Nuriel said that both Hezbollah and Hamas were in possession of a number of drones with a range of over 300km.

On November 16, 2012, the IDF claimed it had destroyed what it described as a Hamas drone development program in the city of Khan Yunis. The IDF released a video that it alleges shows a small drone in testing.