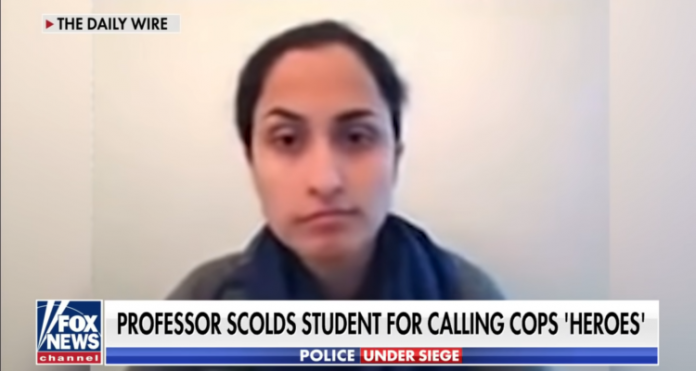 A California college professor who berated a student for expressing support for the police has been placed on leave, according to reports.

In a clip that’s gone viral, Faryha Salim, an adjunct professor at Cypress College, is seen repeatedly interrupting the student, Braden Ellis, and shouting over him.

The drama began after Ellis gave a presentation challenging the notion that the police are systemically racist.

Salim took offense, saying that “the whole reason we have police departments in the first place… it stems from people in the south wanting to capture runaway slaves.”

Later, when Ellis said, “I think cops are heroes, and they have a difficult job…” Salim interrupted him.

“All of them?’ she asked. When Ellis said there are good and bad people in every sector of society, she retorted, “A lot of police officers have committed atrocious crimes, and have gotten away with it, and never have been convicted of it.”

Salim did not back up her statement with fact-based evidence.

“So what is your bottom line point? You’re saying police officers should be revered? Viewed as heroes?” she asked Ellis.

Ellis replied that yes, he believed police officers “are heroes, in a sense” because they come to people’s aid. He asked the professor what she would do if someone with a knife or gun broke into her residence.

“I wouldn’t call the police,” Salim said. “I don’t trust them. My life’s in more danger in their presence.”

Cypress College officials said Salim had been placed on leave for the remainder of the term, and would not be returning to the institution for the fall 2021 semester.

“I was shocked. I didn’t really expect an answer like that. I was assuming that she would just play devil’s advocate,” Ellis told local news station KTLA.

“But she put her bias in there and she gave me what she thought of the police, and it was a little bit sad, to be honest with you.”

“Too many of America’s universities have become indoctrination farms where critical thinking and ingenuity are stifled by the intolerance of simple minded professors like these who are completely unwilling to accept anything but their own opinion as fact,” the group said.