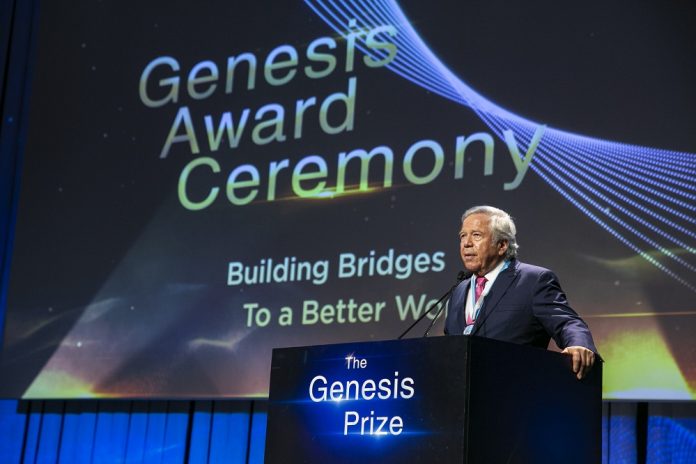 Most of us have grown up admiring those people who have received the auspicious Nobel and Pulitzer prizes.

Accomplished persons in their own unique disciplines and people who have contributed enormously to the culture and society in which we all did well.

Be it in medicine, science, literature, math, or just about anything you can think of, these people have distinguished themselves above the rest through their relentless work aimed towards helping humanity in multiple ways.

Having said this, and after careful thought and discerning scrutiny, it appears that Israel’s “Genesis Prize” (also known as a Jewish Nobel Prize) is not only a complete sham but it serves to heap severe humiliation on the country that is handing it out.

Some of the previous recipient’s of the $1 million prize that is defined as one granted to a person who “fosters Jewish identity, inspires Jewish pride, and strengthens “the bond between Israel and the diaspora.”

Hmmm… if that is the sole criteria for being eligible to receive this “august” prize then why give it to someone like billionaire Mike Bloomberg whose cause celebres do not exactly coincide with the outline for the prize. Bloomberg’s concern for the environment, for health, and for sponsoring research at his alma mater, Johns Hopkins University is all fine, well and good but it does not inspire Jewish pride, nor does it foster Jewish identity, among other things.

This year, the Genesis Prize is going to Obama supporter and liberal icon, film producer and director, Steven Spielberg. While we offer our full-throated support to Spielberg for his invaluable research on the Holocaust and the careful preservation of personal testimonies from survivors, we also need to bear in mind that the causes that Spielberg throws his cash behind are often those whose values and agenda is totally inimical with that of Jewish interests or the interests of the State of Israel.

There is no doubt that Spielberg has every intention of donating his prize money to charitable causes, but which causes?

According to a recently published op-ed  penned by David Isaac at the World Israel News web site, among those causes that Spielberg deems worthy of handing Israeli cash to are “Black Voters Matter, Justice for Migrant Women, the National Domestic Workers Alliance, Native American Rights Fund, and One Fair Wage.”

In theory, these groups fall within the parameter of the concept of Tikkun Olam, but at what price for Jews?? Let’s face the stark reality of the bleak facts.

Groups that champion such causes of social and climactic justice as well as those groups who storm the proverbial barricades to battle against the perennial scourges of racism and ethnic discrimination usually have a strong anti-Semitic element running through them. And that element manifests itself in bashing Israel or accusing Jews of exercising their purported “privilege”.

The committee that decides who will receive the Genesis prize needs to either modify their criteria statement or else engage in some serious consultation about the countless Jewish leaders and professionals who actually deserve this award.

Are We Supporting Terrorists?