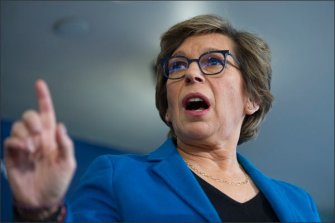 Union leader Randi Weingarten criticized Jews as “part of the ownership class” dedicated to denying opportunities to others in an interview released on Friday.

Weingarten—who is herself Jewish and draws a six-figure salary as head of the American Federation of Teachers (AFT)—took aim at American Jews in an interview with the Jerusalem Post. When asked about parents critical of the AFT’s resistance to school reopening, Weingarten took aim squarely at Jewish critics.

“American Jews are now part of the ownership class,” Weingarten said. “Jews were immigrants from somewhere else. And they needed the right to have public education. And they needed power to have enough income and wealth for their families that they could put their kids through college and their kids could do better than they have done.”

“What I hear when I hear that question is that those who are in the ownership class now want to take that ladder of opportunity away from those who do not have it,” she said.

Weingarten’s comments come after months of political conflict about whether to reopen school system as vaccinations ramp up and the coronavirus crisis recedes.

A major Jewish advocacy group ripped Weingarten for being “inaccurate and dangerous” in her generalizations about the Jewish community. StandWithUs, a pro-Israel advocacy organization, said the union boss was “out of touch” with the experience of Jewish students and came close to trafficking in anti-Semitism.

“As a non-partisan Israel education organization, StandWithUs takes no position on the debate over when schools should reopen,” Roz Rothstein, cofounder and CEO of StandWithUs, said. “We work with many Jewish students and parents in Los Angeles and are extremely disappointed by Randi Weingarten’s inaccurate and dangerous generalizations about our community.

“Her comments are shockingly out of touch with the actual experiences of countless Jewish families before and during the COVID-19 pandemic, give undue legitimacy to antisemitic stereotypes, and do nothing to help bring people in Los Angeles together during this difficult time.”

The American Federation of Teachers, which did not respond to a request for comment, is the second largest teachers’ union in the country and one of the Democratic Party’s largest financial backers. The 1.5 million-member union spent more than $20 million on the 2020 election, according to the Center for Responsive Politics.

Parents have overwhelmingly supported the effort to open schools. A February Gallup poll found that nearly 80 percent of parents of all religions have expressed support for in-person instruction for their children.

BLM Activist Asks When People ‘Ready to Get Blood on Their Hands?’