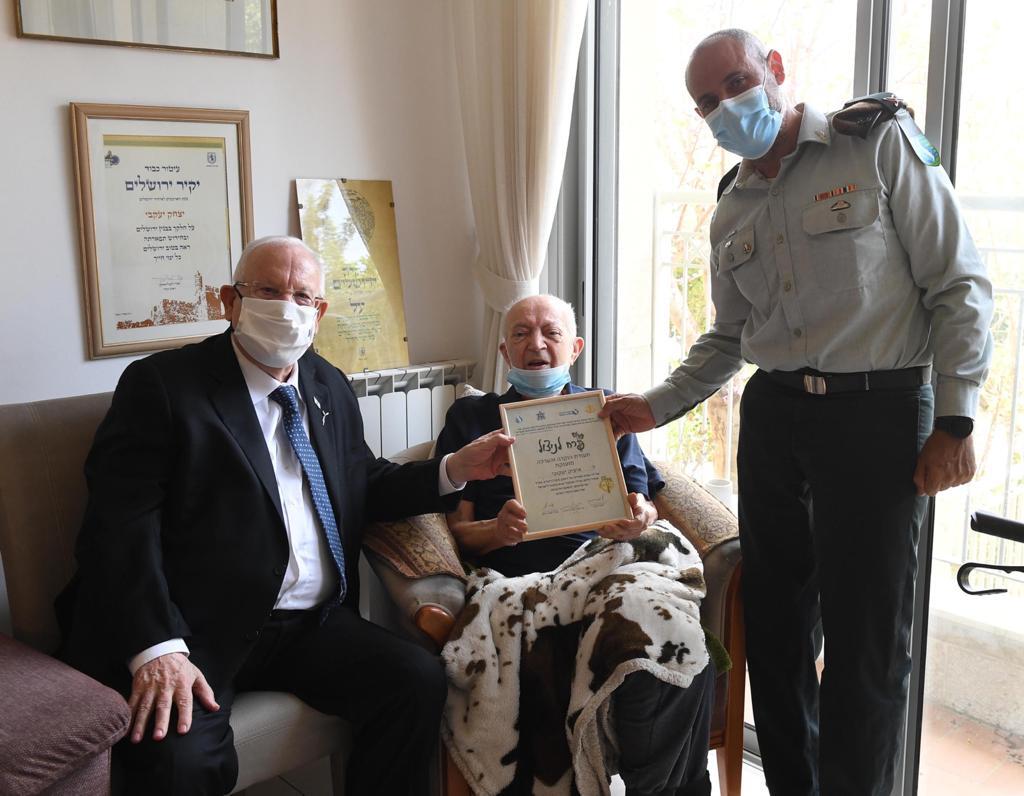 Will Shurat Hadin bring social media giants to their knees?

(TJVNEWS.COM) President of Israel Reuven (Ruvi) Rivlin today, Thursday 8 April / 26 Nissan, presented a certificate to Holocaust survivor Itzik Yaakoby as part of the “Flower for the Survivor” project, a joint initiative of the Foundation for the Benefit of Holocaust Victims in Israel, the IDF Education and Youth Corps and Beit Lochamei Haghetaot. The presentation took place at the Ahuzat Beit Hakerem sheltered housing and IDF Chief Education Officer Brig.-Gen. Ophir Levius also participated.
Holocaust survivor Itzik Ya’akobi, 90, was born in Hungary and came to Israel in 1947 after surviving Auschwitz and Mauthausen, the only survivor in his family. He served in the Givati Brigade of the IDF and lost the sight in one eye during the battles for Negba. He worked in the public sector, serving as David Ben-Gurion’s assistant and worked on the development and refurbishment of Jerusalem.
The president expressed his appreciation to Itzik, saying “I have no words that can capture the depth of respect and admiration I and all Israelis have for you, Itzik. You are part of the generation of giants who established the country. A generation of people who came from the ashes of the Holocaust, against all odds and created a home here – a national home and a home for yourself – in Eretz Yisrael. You laid the foundations for this home for us all. You paved the path along which we walk, and along which we shape our Jewish and democratic state.”
The avenue of memory between Yom HaShoah and Yom Hazikaron is the Holy of Holies of Israel and Israeliness. The value that links them is that of heroism. You are a symbol of Jewish and human heroism,” said the president, thanking Itzik for his great contribution to the battles for the country, just as he immigrated, and the building and development of Jerusalem.
“You are an example and an inspiration to us all. On this day, we are doing the little we can to tell you how deeply we appreciate and value you. Thank you,” concluded the president.
Itzik thanked the president, saying with emotion, “I am deeply moved that you came here. I never imagined I would have the privilege of sitting here.”
Please find pictures attached from President Rivlin’s participation in the Unto Every Person There is a Name ceremony, held at the Knesset.