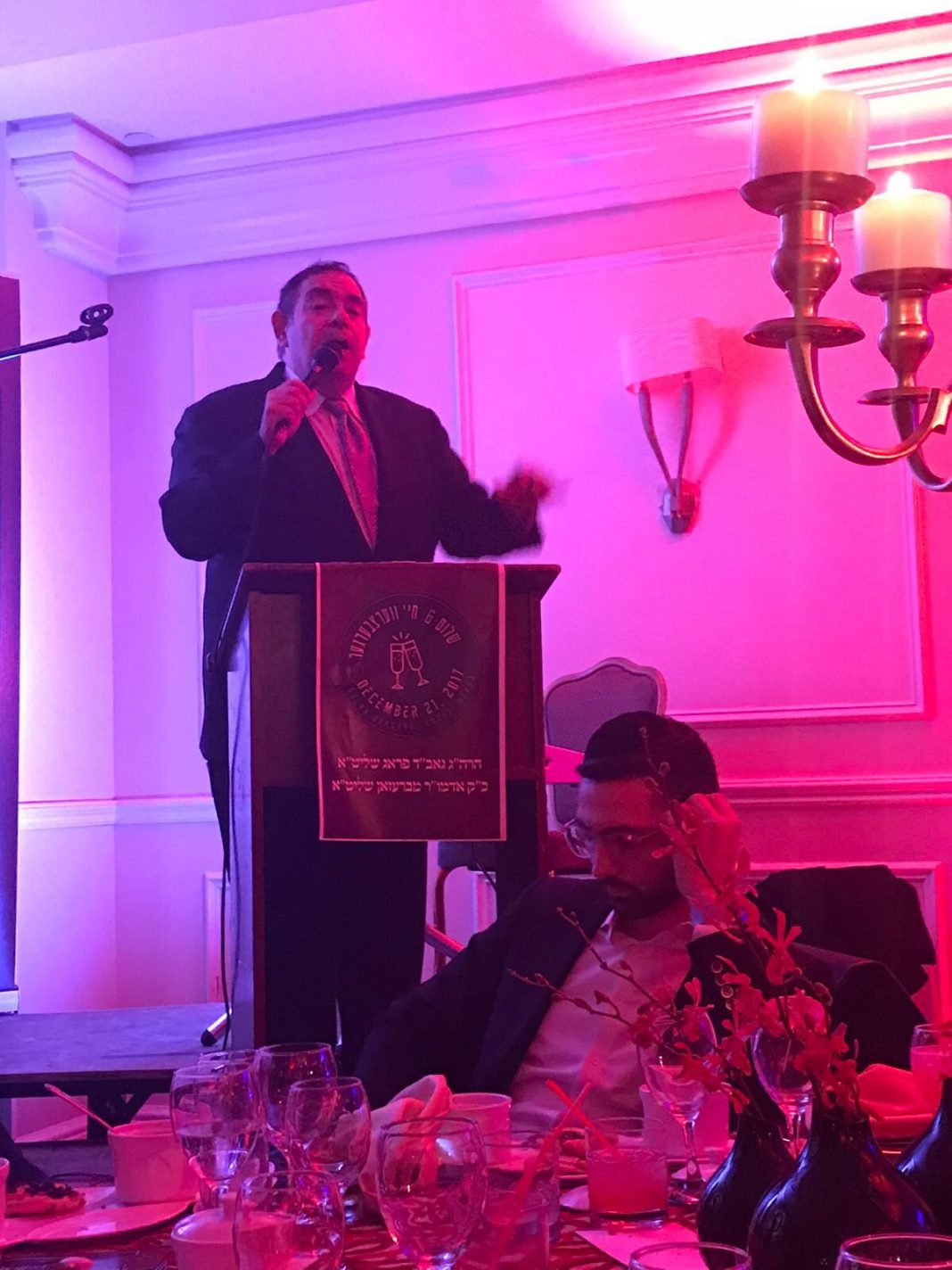 Heshy Tischler, known since his yeshiva days as Uncle Heshy — or just “The Big H” — is a community icon and South Brooklynite for his entire life. He is married for over 30 years to his wife, Linda, and has raised three sons in the South Brooklyn community. He is now the proud zeidy of one grandchild.

Heshy is known throughout the neighborhood as host of the Just Enough Heshy Show. Because hey — it’s never enough but it may be just enough. Watch his show at 9 o’clock every Wednesday night at 620 AM for news and talk about community issues.

Uncle Heshy is the gregarious uncle to more than just his 104 biological nieces and nephews. Anyone with a problem knows that they can come to the Tischlers for good food, a place to stay, and a caring shoulder to lean on. The Tischlers have had 21 children pass through their house. These include society’s saddest forms such as ex-felons who need a place to crash. They get a loving family, help finding a job and an apartment, and a lifelong connection.

Heshy as a Community Activist

Heshy grew up with a sister who has Down Syndrome. That experience has helped him emphasize with those who require medical care and constant hospitalizations. He and his wife Linda have been helping special needs children and adults for decades. For over 30 years, Heshy tries to make it to the hospital every day, bringing sandwiches and fresh food for the patients. He visits inmates in prison every two weeks, bringing good cheer and a smile to those forgotten by society.

For the past seven years Heshy has been involved with Rabbi Mordechai Fisch of Khal Sheves Achim in Boro Park, sponsoring and boxing food for 107 mostly Bukharian families. He helps out at Rabbi Ozer Babad’s youth center in Boro Park, taking troubled youths off the street and into a warn environment.

All this has led him to begin a political career three years ago, when in 2017 a City Council seat opened when David Greenfield resigned. Despite the lateness, Heshy acceded to urgings by friends and others to get in. The experience gained on the trail, hearing people’s concerns and how politicians have forgotten them strengthened his desire to get into public service, early this time so he could win.

When Mayor Bill de Blasio closed the parks earlier this year and refused to reopen it even with strict social distancing, nobody stood up for the hundreds of mothers who needed an open space for their children to enjoy themselves. Weeks passed, the number of COVID-19 cases dwindled, and the parks still had those ugly chains wrapped around the gates.

Finally, Heshy went there and cut the locks. I went to parks around the city — 19 in all — and opened them for those what it belongs to — the people. Children now have a place where they could safely play, adults have a place to relax and everyone can enjoy the open spaces.

But Heshy has been there for the community for decades. As a receiver for the New York City Department of Housing Preservation and Development, he helps anyone with housing problems. He helps tenants stay in their apartments when landlords try to push them out and helps landlords evict bad tenants. As an expeditor and a certified building inspector he has helped remove illegal fines from buildings.

“People ask me what I do,” Heshy says. “I like to say that I am a problem-solver. People started coming to me for solutions to their problems. When they realized that I was able to get stuff done they started coming even more. Shuls, yeshivas, businesses and centers that need help with government bureaucracy come to me and I take care of it.”

Heshy’s Agenda — for the People

Heshy’s long experience working with city government on behalf of people has given him a unique perspective on what has to be strengthened and what should be changed — or dropped entirely.

Heshy rose to national prominence when he restored ownership of New York City’s parks to its citizens. He will therefore be looking into reorganizing the Parks Department — there is too much bureaucracy there and not enough action for residents of the five boroughs.

The City Council makes way too many laws, putting additional burdens on our citizens. There are an average of two dozen new laws enacted by the legislature every month. We should be looking to repeal laws, not make the city a more regulatory place. There is also too much bureaucracy. Heshy will cut the red tape to make it easier to live and do business in the city.

As an experienced expeditor who has helped many people with government kn95agencies, Heshy will take a hard look at the agencies and whether all of them are need. There are 312 government agencies — some of them have to go. Heshy will look to fold five agencies into each other. Millions of dollars can be saved by merging the departments of Sanitation, Buildings, Housing Preservation and Development (HPD), Finance, Transportation (DOT) and Health and Mental Hygiene.

Heshy also wants to reform a few big agencies. The Buildings Department, for example. This agency has no oversight whatsoever and they do whatever they want. They’ve been abusing residents with frivolous violations for too long. Heshy will reimagine it in a way that makes them accountable to the people.

The Mayor’s Task Forces are like unelected lawmakers — they have the power to shut down anything they want but are not elected. Heshy wants them shut down.

The Department of Housing Preservation and Development. This agency is full of corruption and a lack of transparency. For example, it has a few commissioners that do the same thing, making them redundant.

In addition, there should be one inspector for all departments instead of having separate ones show up for the Buildings department, Sanitation or Health. All inspectors must be trained in the specific industry they are inspecting and have been licensed in the past for that industry. We can’t continue to hear of horror stories of buildings inspectors with no idea what a two by four is.

Heshy has fought all his life to prevent the frivolous nickel and diming of landlords and small businesses. In the City Council, he will craft and submit legislation to lower the interest rate and late payment fees for these fines. He will also create an annual amnesty for all fines, where people can pay their fines without worrying about late payment fees.

But here’s one fee he’s willing to raise. Heshy will work with the Department of Motor Vehicles to instate an across the board fee hike of $100 or $150 on licenses and use the money to pay inspectors to keep traffic flowing instead of handing out tickets. This will save us all money and aggravation. Only drivers doing something egregious should be fined.

Airports have no-stop rules in front of terminals, so should our major arteries. All avenues from Avenue J until Kings Highway should be closed to parking during the day and focus on keeping traffic flowing smoothly. To make up for this, the city should build municipal parking lots. Also, cars should be able to park in municipal parks overnight, beginning when they close at 7 p.m.

School buses are long and take up a huge amount of space, they should not be allowed to park on our avenues. Altogether, Boro Park, Flatbush, Midwood and Brighton Beach have about 1,400 buses riding on our streets, many of them with no parking lots to be housed at night. Schools should pay for overnight parking.

Heshy has big plans to help the district’s troubled youths, many of whom have no home. Based on his decades of experience with these youths, Heshy wants to add youth centers and drub rehabilitation centers to the neighborhood.

“I want to help the quality of life, improve living conditions and help parents better educate the children in our community,” Heshy said. “I want to improve the wellness and job opportunities of the men and women of the 48th District.”

There is a grand total of just two youth centers in the entire South Brooklyn. This is unacceptable. We need many more in order to get youths off the streets. We have only one drug center — SAFE — in the entire area. We need more youth centers to save our next generation. There have been 92 suicides in our Midwood community this past year. We must also bring awareness lectures on drugs and depression to our yeshivas.

Postpartum depression in a very serious issue in our community. Other councilmen have secured tens of millions of dollars to bring organizations such as SPARKS to their districts. We do not have that in the 48th district. Heshy will be a fighter for these needed funds.

Many women in the 48th district have careers and jobs. They need childcare to be able to go to work. Heshy will make sure that there are afterschool programs in our schools and yeshivas.

Jobs is the single-most important part of the 48th District’s economic engine. But many youths do not have a job. I have a plan to work with businesspeople to get provide city tax breaks in exchange for creating jobs. This will save the city millions in welfare and in means-tested benefit programs.

Heshy is a strong supporter of our yeshivas and will work to protect them against Naftuli Moster and his YAFFED group’s plots to make it harder to operate the way they’ve done for centuries.

Heshy will make sure there are enough afterschool vouchers and prekindergarten slots for the many hardworking men and women to be able to send their kids.

Heshy strongly supports President Trump and his Law and Order program. He will defend the NYPD against the Defund Police radicals and show them the appreciation they deserve.

“I will be the biggest fan of the New York Police Department in the City Council,” Heshy said. “I will fight every attempt to defund them or demean their lifesaving work. I understand that some minorities feel targeted by the police. To address that, I will call for a citizen-managed council to oversee the police. This will be an independent body made up of residents of each district. But police must feel that they are valued.”

The city’s 311 call center has been a failure from the beginning. It’s a waste of time and leads to frivolous calls. People should be redirected to their local community board when they call the help center instead of to a main switchboard that rarely helps them anyhow. Heshy will work to cancel the 311 call center and bring back something better.

Heshy has been visiting senior citizens every single week for decades, helping them and making sure they are cared for. He wants seniors to have access to wherever they want to go so he will work to expand the Access-A-Ride program and protect it from funding cuts.

Heshy has a plan to help get homeless individuals off the streets and into respectable housing.

“As a city councilman,” Heshy said, “I will be fighting not only for the 48th district but for the entire city. I have a proven record of fighting for the rights of everyone — of all ages, races and colors. As your councilman, I will be able to continue helping you, just now with better tools.”