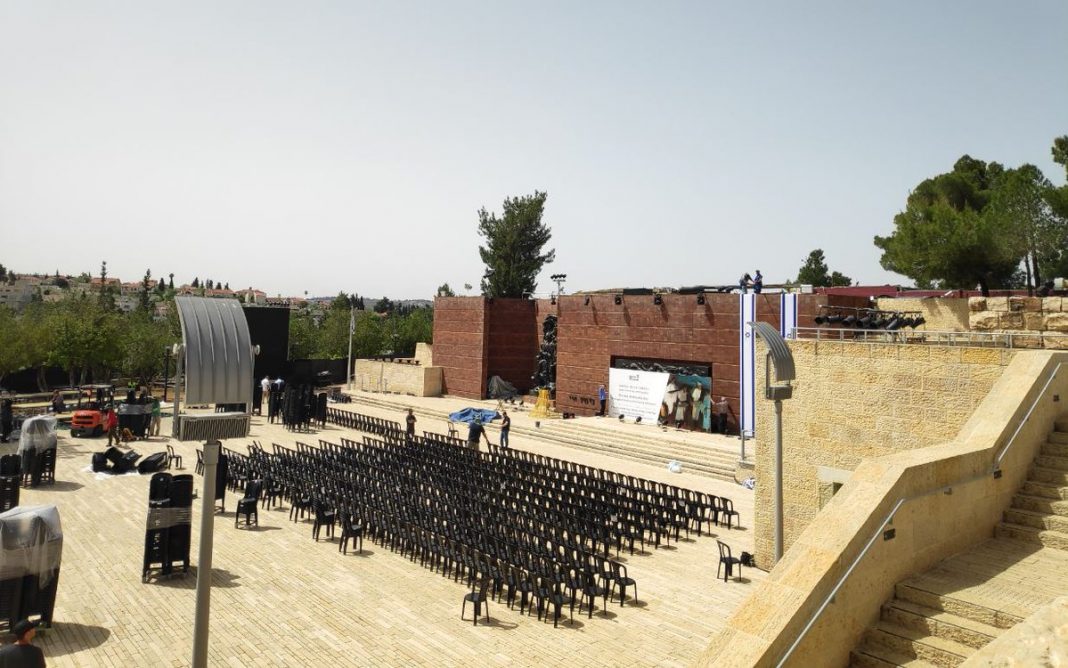 During the ceremony, Holocaust survivors will light six torches. First torch: Shmuel Naar; second torch: Zehava Gealel; third torch: Yossi Chen; fourth torch: Halina Friedman; fifth torch: Sara Fishman; sixth torch: Manya Bigunov. During the ceremony, short videos about each of the torchlighters will be shown. Produced and directed by Shlomo Hazan, these videos will be available on the Yad Vashem website in the section dedicated to Holocaust Remembrance Day 2021.

Israeli singers David Daor and Meshi Kleinstein, as well as the IDF Paratroopers’ Honor Guard, will participate in the ceremony, which will also include narrative pieces by Israeli actor Dean Miroshnikov. The moderator for the ceremony will be Hila Korach. The ceremony will last approximately 75 minutes.

As in past years, the ceremony will also feature a traditional memorial service, including the recitation of a chapter from Psalms by Chief Rabbi of Israel Rabbi David Lau. The Rishon LeZion, Chief Rabbi of Israel Rabbi Yitzhak Yosef will recite the Kaddish mourner’s prayer, and Cantor Avraham Kirshenbaum will recite El Maleh Rahamim, the Jewish prayer for the souls of the martyrs.

Yad Vashem will broadcast the State Opening Ceremony live with simultaneous translation into English, French, Spanish, German, Hebrew and Russian via its websites in their respective languages. Additionally, for the first time, Yad Vashem will offer simultaneous translation in Arabic available on the Yad Vashem YouTube Channel in Arabic. The live feed will also be accessible via Facebook (only live in English and Hebrew).

The State Opening Ceremony will also be broadcast live on Israeli television – Channels 11, 12, 13, 9 and 20, as well as by Walla, N-12 and Y-Net, and via radio – Galei Tzahal and KAN Radio – and will last approximately 75 minutes.

Yad Vashem has created special mini-sites dedicated to Holocaust Martyrs’ and Heroes’ Remembrance Day containing information about the events and ceremonies taking place throughout the day. Also included in the mini-sites are relevant educational materials and a new online exhibition entitled, “The Onset of Mass Murder: The Fate of Jewish Families in 1941.” Using photographs, documentation and testimonies from Yad Vashem’s unrivalled collections, the exhibition tells the stories of the Jewish families in the wake of Operation Barbarossa, and their ultimate fate in Estonia, Latvia, Lithuania, Eastern Poland, Belarus, Ukraine, Romania and Yugoslavia.

On the eve of Holocaust Remembrance Day, moments before the beginning of the State Opening Ceremony, Yad Vashem and Tzohar invite the public, as families, to take part in the “Generations Light the Way” initiative by lighting six memorial candles in memory of the six million victims of the Shoah, and reciting the traditional mourner’s prayer “El Maleh Rahamim” and/or the poem “Nizkor – Let us Remember” by Holocaust survivor Abba Kovner.

Yad Vashem continues to call on the public to fill out Pages of Testimony to commemorate the names of Jews murdered during the Holocaust. Volunteers are available to help Holocaust survivors and their family members submit Pages of Testimony. Yad Vashem is also prolonging the nationwide Gathering the Fragments campaign in an effort to rescue more Holocaust-related documents, artifacts, photographs and artworks, and interview, document and record video testimonies of survivors. For more information on all of these ongoing commemorative projects: +972-2-6443888 or collect@yadvashem.org.il

Yad Vashem, the World Holocaust Remembrance Center, was established in 1953. Located in Jerusalem, it is dedicated to Holocaust commemoration, documentation, research and education.