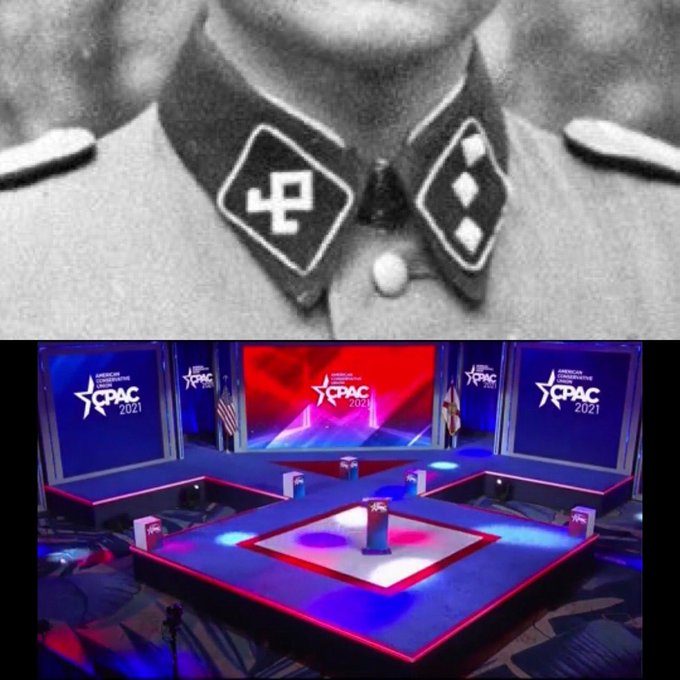 Twitter, whose terms and conditions are strongly set against any news item which could be considered a “conspiracy theory”, has allowed an outrageous “Nazi conspiracy theory” to spread like wildfire on their platform, after one time TV star turned hardcore leftist activist Alyssa Milano propelled the conspiracy to her 2.9 million Twitter followers.

Alyssa Milano floated a Nazi conspiracy theory directed toward the organizers of CPAC, suggesting that they deliberately fashioned the main stage to match the shape of a Nazi symbol.

All weekend, The Jewish Voice’s Twitter was assailed by outraged liberals, calling TJV ” Nazi supporters”. Initially, TJV News staff could not figure out why the sudden uptick of left-leaning comments from an apparent “outrage mob”, until the conspiracy theory became more appearant.

“This is the stage at CPAC. THEY’RE NOT EVEN TRYING TO HIDE IT ANYMORE,” Milano wrote in an outraged post to her 2.9 million Twitter followers before tagging Hyatt, where the political convention took place. “@hyatt, this is what’s happening in your building. @tedcruz, you stood on this stage.”

As of today, thousands of virtue-signaling leftists are calling for a boycott of Hyatt, following the marching orders of the nominally talented and insanely paranoid actress, who is an expert at faux outrage. The story gained national attention quickly.

The goal of the radical leftist Milano was to once more associate Nazism with conservatism.

If you question the outcome of the 2020 election, social media will instantly ban you.

If you call for the boycott of Hyatt Hotels and brand all conservatives Nazis, based on a conspiracy theory propelled by a washed-up 80’s child actress who was last a household name in the 1980s when she starred in  “Who’s the Boss”- you have full free speech rights on social media.

Mention Hydroxychloroquine or Ivermectin, as possible COVID preventives or possible cures, you will vanish from Facebook, YouTube, Facebook, and Instagram forever,  but if you smear millions of people as Nazis, social media will gleefully allow your posts to propel to astronomical numbers.

Matt Schlapp, chairman of the American Conservative Union and lead organizer of CPAC, dismissed the conspiracy theories as both “outrageous and slanderous.”

“Stage design conspiracies are outrageous and slanderous. We have a long-standing commitment to the Jewish community. Cancel culture extremists must address antisemitism within their own ranks. CPAC proudly stands with our Jewish allies, including those speaking from this stage,” he said.

Hyatt also responded to leftists who complained over the hotel’s willingness to host the conservative conference.

“We take pride in operating a highly inclusive environment and we believe that the facilitation of gatherings is a central element of what we do as a hospitality company,” a spokesperson said in a statement.

“We believe in the right of individuals and organizations to peacefully express their views, independent of the degree to which the perspectives of those hosting meetings and events at our hotels align with ours,” the spokesperson continued. “Our own values support a culture that is characterized by empathy, respect, and diversity of opinions and backgrounds, and we strive to bring this to light through what we do and how we engage with those in our care.”

Milano did not find the statement satisfactory and immediately called for a boycott of Hyatt.

The alleged liberal, Millano is willing to destroy thousands of people’s lives by calling for a boycott of a major hotel chain, over a deranged, unhinged, and paranoid conspiracy theory.

A successful boycott on the already strained hospitality industry could lead to pain and suffering of innocent people who work for Hyatt. The “loving progressive” could not care less, after all, she got to call people who disagree with her Nazis…  Mission accomplished.

Milano is a heartless woman, who has no regard for the damage caused by spreading fallacious lies. Hyatt employs over 100,000 people worldwide.  The “Who’s the Boss” star could not care less if those people and their families go hungry after her brainwashed minions follow suit and boycott Hyatt.

Meanwhile, at CPAC, hundred’s of conservative Jews were welcomed at the event which included Jewish prayer services and Kosher dining, because CPAC was organized by “Nazis”