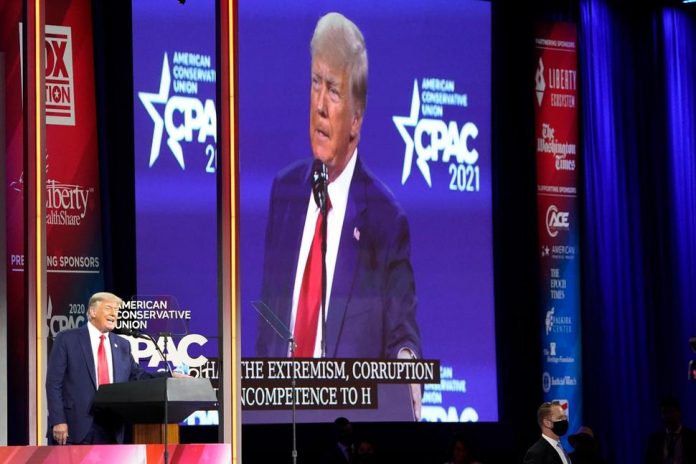 Taking the stage for the first time since leaving office, former President Donald Trump on Sunday called for Republican Party unity in a much anticipated speech at Florida’s Conservative Political Action Conference (CPAC).

Held in Orlando this year at the Hyatt Regency Hotel, the capacity crowd of staunch Conservatives and hard working American patriots, spent three days listening to like minded conservative elected officials who addressed a number of pressing issues in the country, including immigration, education, foreign policy, health care, the stimulus bill, climate change, etc. They also presented well crafted critiques of the Biden administration and how the nation’s 46th president is starting out on the wrong foot.

The resounding theme of this year’s conference was “America Uncancelled” which squarely addressed the nefarious agenda of the “woke” generation and those on the political left who have been unrelenting in the coercive imposition of their version of “cancel culture.”

For those not in the know, “cancel culture” is essentially tantamount to an insidious form of fascism that seeks to silence those who do not march lockstep with the doctrinaire approach of the ruling party. Such totalitarian regimes that are absent of any form of democratic government, as well as an individual’s right of free speech, have sprouted up in leftist countries throughout the last century. One need only study the Stalinist purges of Soviet Russia to obtain a glimpse of the deleterious effects of a society predicated on a cancel culture mentality.

AP reported that even as Trump exacerbated the GOP’s divisions and made clear he intended to remain a dominant force in the party, Trump used his speech to blast President Joe Biden, and try to cement his status as the party’s undisputed leader.

“Do you miss me yet?” Trump said after taking the stage, where his old rally soundtrack had been playing, according to the AP report. “I stand before you today to declare that the incredible journey we begun together … is far from being over.”

Though Trump has flirted with the idea of creating a third party, he pledged to remain part of what he called “our beloved party,” as was reported by the AP.

“We’re not starting new parties. We have the Republican Party. It is going to unite and be stronger than ever before,” Trump told the enthusiastic crowd.

“That was fake news. Fake news,” continued Trump, sarcastically mocking what would have been a dubious strategy. “Wouldn’t that be brilliant? Let’s start a new party and let’s divide our vote, so that you can never win. No we’re not interested in that,” Trump said, as was reported by the NYP.

Trump also said he would be working to get “strong, tough” Republicans elected.  “We have the Republican Party,” Trump said. “It is going to unite and be stronger than ever before.”

Trump urged his supporters to vote out “RINOs” in Congress, while encouraging the party to stay united around a pro-worker platform, as was reported by the NYP.

Trump said that voters should cast out the so-called “Republicans in Name Only” in the 2022 midterm elections. “Now more than ever is the time for tough, strong and energetic Republican leaders who have spines of steel,” Trump declared, according to the Post report.

“Top establishment Republicans in Washington should be spending their energy on opposing President Biden, House Speaker Nancy Pelosi, Senate Majority Leader Chuck Schumer and the Democrats. I’ve said to some of them, I said, ‘You know, during the Obama years and now during Biden, if you spent the same energy on attacking them, you’d actually be successful — as you do on attacking me in many cases’,” declared Trump.

Identifying by name the 10 House Republicans who voted to impeach him one week after the January 6th Capitol riots for allegedly inciting the violence, Trump also spoke of the seven GOP senators who voted to convict him.

Indeed, on Friday, Trump began his vengeance campaign, endorsing Max Miller, a former aide who is seeking to oust Ohio Rep. Anthony Gonzalez, who voted in favor of Trump’s impeachment, according to an AP report.

Trump also delivered a sharp rebuke of what he framed as the new administration’s first month of failures, including Biden’s approach to immigration and the border, according to the AP report.

“Joe Biden has had the most disastrous first month of any president in modern history,” Trump said. The Post reported that he added that, “We all knew the Biden administration was going to be bad, but no one knew how bad they would be. There’s no better example than the new and horrible crisis on our southern border. In just one short month, we have gone from America first to America last.”

In terms of recognizing the problems with the Biden camp, Trump said “We’re one country. We can’t afford the problems of the world. As much as we’d love to — we’d love to help. We can’t do that. So they’re all coming because of promises and foolish words.”

Trump also called for the reopening the nation’s schools amid the pandemic, charging that Biden had “sold out America’s students to the teachers unions, “ Trump said.

Addressing this point of disproportionate labor union influence in local politics, one retired New York City high school math teacher told the Jewish Voice on the condition of anonymity that, “I used to be a delegate assembly member at the UFT, and I can tell you that it is a politically far-left union that really focuses on getting the best deal for teachers with as little output as possible,“ the unnamed source said. “At UFT demonstrations, you often hear the members chant, “It’s All About the Kids” when the complete opposite is true. They don’t care about the kids at all. It’s all about them and how they can game the system to their favor.”

The NYP reported that Trump said that “Joe Biden has shamefully betrayed America’s youth, and he is cruelly keeping our children locked in their homes, no reason for it whatsoever, they want to get out.”

“They are cheating the next generation of Americans out of the future that they deserve and they do deserve this future,” he continued, according to the Post report. “They’re going to grow up, and they’re going to have a scar… the mental and physical health of these young people is reaching a breaking point.”

“On behalf of the moms, dads and children of America, I call on Joe Biden to get the schools open and get them open now,” Trump said, to thunderous applause.

Trump bashed the Biden administration, according to the Post report, over claims that it was “starting from scratch” to develop a national vaccine distribution plan because the former president had left them with nothing.

Slamming the newly passed Equality Act during his address, Trump said it will destroy women’s athletics by allowing transgender athletes to compete, according to the NYP story.

“Young girls and women are incensed that they are now being forced to compete against those who are biological males,” Trump said, as was reported by the NYP.  “It’s not good for women, it’s not good for women’s sports, which worked so long and so hard to get where they are.”

“The records that stood for years, even decades, are now being smashed with ease,” he said. “If this is not changed women’s sports as we know it will die. You know, for years the weightlifting, every ounce is like a big deal for many years. All of a sudden somebody comes along and beats it by 100 pounds.” Trump declared, “We must protect the integrity of women’s sports. So important.”

While he no longer has his social media megaphone after being barred from Twitter and Facebook, Trump has already been inching back into public life, as was reported by AP.  He called into conservative news outlets after Rush Limbaugh’s death and to wish Tiger Woods well after the pro golfer was injured in a car crash. He has also issued statements, including one blasting Mitch McConnell after the Senate Republican leader excoriated Trump for inciting the Capitol riot. McConnell has since said he would “absolutely” support Trump if he were the GOP nominee in 2024.

At his Mar-a-Lago club in Palm Beach, Florida, Trump has been quietly meeting with aides and senior party leaders as he builds his post-presidential political operation. While he has already endorsed several pro-Trump candidates, aides have been working this past week to develop benchmarks for those seeking his endorsement to make sure the candidates are serious and have set up full-fledged political and fundraising organizations before he gets involved, as was reported by the AP.

They are also planning a new super PAC that could raise unlimited amounts of money, though one aide cautioned they were still deciding whether to create a new entity or repurpose an existing America First super PAC, as was reported by the AP.

The CPAC straw poll of just over 1,000 attendees found that 97% approve of the job Trump did as president. But they were much more ambiguous about whether he should run again, with 68% saying he should, as was reported by the AP.

If the 2024 primary were held today and Trump were in the race, just 55% said they would vote for him, followed by Florida Gov. Ron DeSantis at 21%. Without Trump in the field, DeSantis garnered 43% support, followed by 8% for South Dakota Gov. Kristi Noem and 7% each for former Secretary of State Mike Pompeo and Texas Sen. Ted Cruz. (NYP, AP)