Queen Hits Back at Meghan Racism Claims! ‘Some Recollections May Vary’ - The Jewish Voice

Queen Hits Back at Meghan Racism Claims! ‘Some Recollections May Vary’

A Year After Conquering Afghanistan, the Taliban Are Done Pretending to Be ‘Inclusive

Buckingham Palace broke with normal convention Tuesday to issue a direct riposte to the extraordinary claims made by Meghan in her Oprah interview, expressing sympathy but obliquely questioning her version of events.

In a message published by Buckingham Palace on behalf of Queen Elizabeth II, the head of state of the United Kingdom, Canada, and Australia among others, the monarch said Harry and Meghan remained “much loved family members”.

Responding to claims made by Meghan and Harry in their interview with Oprah Winfrey, broadcast overnight Sunday, the Queen said the “issues raised, particularly of race, are concerning”. They would be “addressed” privately, she said, but the monarch made clear that she did not recognise the events as described by Duchess Meghan, noting “some recollections may vary”. 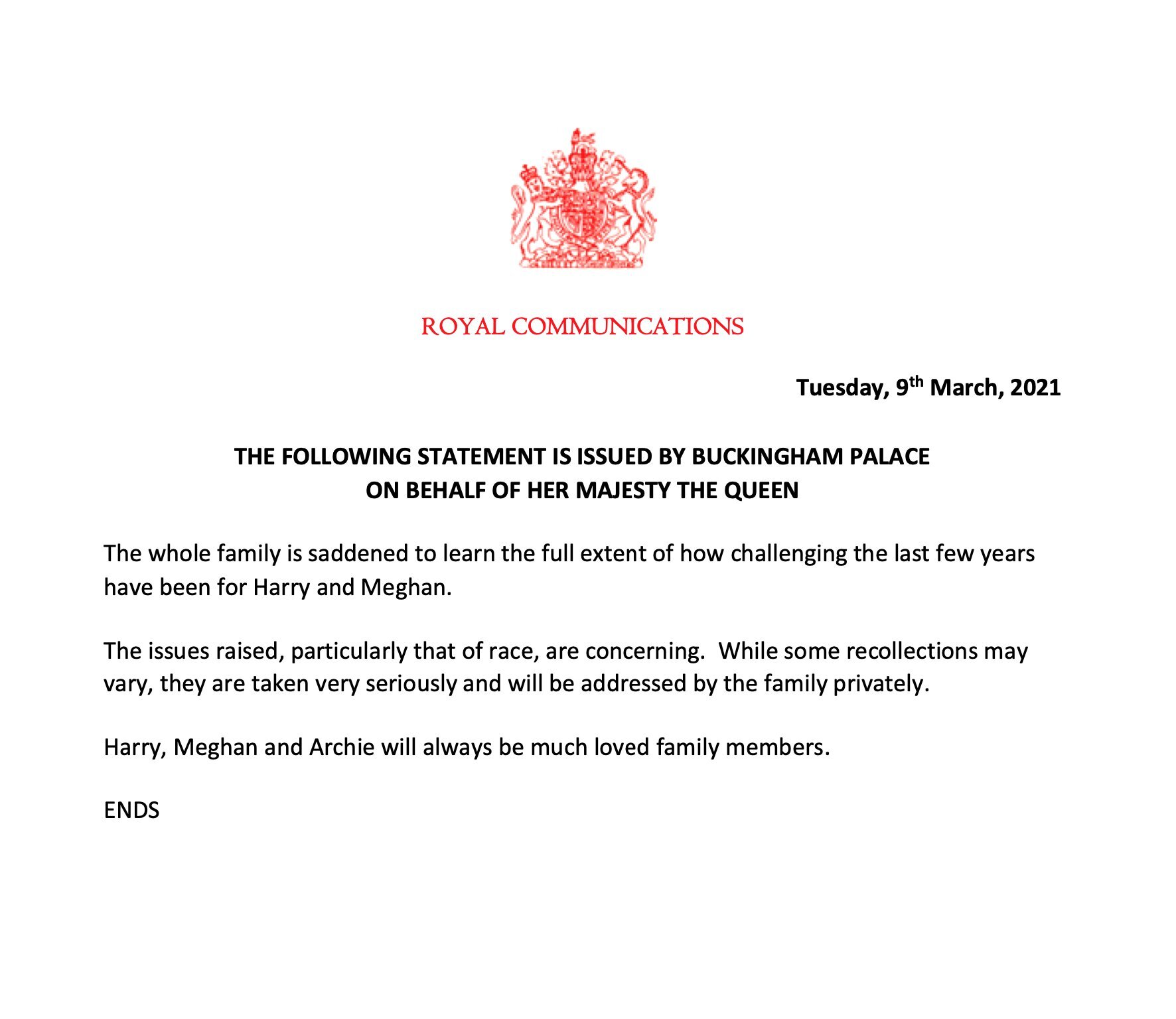 The extraordinary palace communique follows days of speculation and endless headlines generated by Meghan and Prince Harry’s kiss and tell-all television interview with Oprah Winfrey, their first since leaving the senior ‘working’ group of top Royals and relocating to the United States.

During the two-hour tape, Duchess Meghan made serious allegations about the royal family, including the claim that questions had been asked about the skin colour of her unborn child. The duchess also strongly implied — although stopped short out outright saying — that her son had not been made a prince because of prejudice. It has since been widely reported that Archie Mountbatten-Windsor is not a prince of the realm because of a century-old royal protocol that as a great-grandchild of the monarch, he would be a Lord, not a Prince.

Were the Queen to pass away and her son — Prince Charles — take the throne, Archie would then be a grandson, rather than great-grandson, of the monarch and would be entitled to be a British royal prince.

Meghan told Oprah: “In those months when I was pregnant — we have in tandem the conversation of, he won’t be given security, he’s not going to be given a title, and also… concerns and conversations about how dark his skin might be when he’s born”.

Today’s reply to the claims, implying Meghan may have misremembered certain events, are remarkable as the British Royal Family rarely — if ever at all — replies to claims made about it in the press, whether they are true or not. This studied neutrality, which also extends to the Queen not making her views known on matters political, is part of the monarchy’s efforts to remain above the ebb and flow of tabloid opinion.

As Breitbart’s Rebecca Mansour has reported, this behaviour is governed by the unspoken royal rule, Never Complain, Never Explain. She wrote on why a reply was very unlikely, a point which underlines how unusual today’s response is:

They rarely, if ever, respond to news stories at all, even when they are incorrect.

Ironically, this is one of the things Meghan told Oprah she was upset about. She expected the palace to defend her like a celebrity’s PR shop, issuing endless corrections to every negative tabloid story.

But the “firm,” as members of the royal family call the institutional monarchy, doesn’t operate that way. This is nothing new. King Edward VII’s daughter reportedly kept a scrapbook of all the inaccurate newspaper articles written about her family that she titled, “Things We’ve Never Said or Done.” It goes without saying that none of this Edwardian fake news was corrected by the family at the time. The scrapbook was the princess’s way of letting off steam.

…the British royal family doesn’t believe in responding to every bit of bad publicity. To do so would not only be an exercise in futility, it would cheapen them… This is something Meghan doesn’t seem to grasp. But it is this very reticence on the part of the royal family that makes Meghan and Harry’s bombshells so cruel.

This story is developing, more follows.