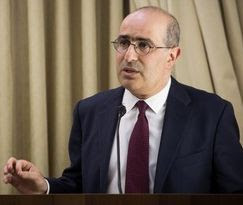 The Board of Directors of the Jewish Community Relations Council of New York (JCRC-NY) announced the appointment of Gideon Taylor as Executive Vice President and Chief Executive Officer as of July 1, 2021 ushering in a new chapter in the leadership of New York’s most prominent Jewish community relations and advocacy organization. Mr. Taylor has served as a member of the JCRC-NY Board of Directors for the past five years and will succeed current Executive Vice President and Chief Executive Officer Michael S. Miller, who will conclude his longstanding tenure on June 30, 2021 after more than 36 years at the helm of the organization.

In September 2020, a Search Committee was formed, and following a six-month search, the committee presented its recommendation to the Executive Committee which in turn conveyed its unanimous choice to the full Board at its meeting today.

“Gideon is a passionate and well-respected leader who has served the diverse New York Jewish community locally as well as the wider Jewish community internationally.  At this critical moment, as our community faces increased levels of antisemitism, internal polarization, and a changing political landscape, we are delighted that Gideon has been selected to lead JCRC-NY into the future,” said JCRC-NY President Cheryl Fishbein.

“For decades, JCRC-NY has fostered meaningful relationships with the political, ethnic, and faith leadership of New York.  As our city continues to evolve and diversify, we are confident that Gideon’s advocacy and leadership will be a positive force for the collective good of the Jewish community and our neighbors throughout New York City, Long Island, and Westchester,” said Jonathan Greenspun, Chair of the Search Committee and Managing Director at Mercury Public Affairs.

“As we emerge from the pandemic, we are aware that the coming years will bring other unique challenges for JCRC-NY and the New York Jewish community – some discernible and some that we cannot forecast,” said Taylor.  “I intend to continue the essential work of building close relationships within the Jewish community and strengthening our commitment to build impactful coalitions with the many diverse communities that make up our City.”

Michael S. Miller noted, “JCRC-NY is very fortunate to have Gideon Taylor as my successor and its next CEO.  His work on the international scale has benefitted innumerable Jewish communities, including many Holocaust survivors in New York.  I have worked with Gideon both in his role as a Jewish professional and as a lay leader and have witnessed his dedication to strengthening our Jewish community and his commitment to building bridges of understanding with others.”

“UJA-Federation is a proud supporter and partner of JCRC-NY in the community relations and advocacy arena,” said Eric S. Goldstein, Chief Executive Officer of UJA-Federation of New York. “We welcome Gideon as the new CEO of JCRC-NY. He is an accomplished leader, and we look forward to working with him, and the entire JCRC-NY team, in building stronger bridges across our community.”

William C. Daroff, Chief Executive Officer of the Conference of Presidents of Major American Jewish Organizations said: “I have often sought Gideon’s guidance on effectively engaging Members of Congress, the Executive Branch, and international governments on issues pertaining to Holocaust survivors and property restitution. Gideon is a trusted advisor and confidante who knows the New York civic and political scene very well.”

Originally from Dublin, Ireland, Mr. Taylor is a law graduate of Trinity College in Dublin and received his master’s degree in law from Oxford University.  He is admitted as an attorney in the State of New York, Ireland and the United Kingdom.