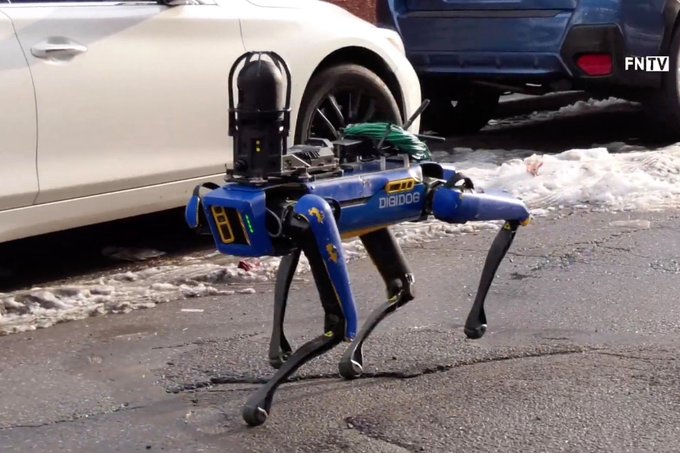 Ocasio-Cortez’s comments on the use of the four-legged robot, known as “Digidog,” came days after it was filmed responding to a home invasion in her borough of the Bronx.

“Shout out to everyone who fought against community advocates who demanded these resources go to investments like school counseling instead,” Ocasio-Cortez wrote.

“Now robotic surveillance ground drones are being deployed for testing on low-income communities of color with under-resourced schools,” Ocasio-Cortez added, including a thumbs-up emoji.

Ocasio-Cortez insisted the money used to craft the $75,000 robot could have been used in other areas.

“Please ask yourself: when was the last time you saw next-generation, world class technology for education, healthcare, housing, etc consistently prioritized for underserved communities like this,” Ocasio-Cortez asked her followers.

Regarding the home invasion that took place in the Bronx, which utilized Digidog services, the Daily Mail noted:

Two men were reportedly being held hostage in a Bronx apartment. They had been threatened at gun point, tied up and tortured for hours by two male assailants who pretended to be plumbers to gain access to the home. One of the victims managed to escape and called the police. Digidog was deployed and helped officers determine that the armed suspects were no longer inside the home.

Digidog was created by Boston Dynamics and is currently in use by the Massachusetts State Police and the Honolulu Police Department. It was deployed in Brooklyn last October to help find a gunman hiding in a basement. It was also used in a hostage situation in Queens in November.