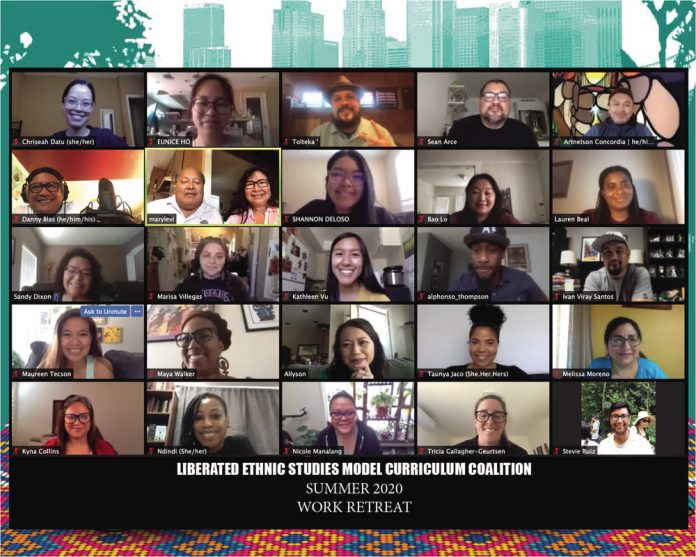 Three organizations that have for several months been raising concerns about the corrupt development of California’s Ethnic Studies Model Curriculum, today called on state officials to investigate further unethical and potentially illegal activities by the curriculum drafters.

“We are writing to express our concern that the founders of what appears to be a for-profit educational consulting firm, Liberated Ethnic Studies Model Curriculum Institute (LESMC), are using the name of California State University Northridge (CSUN), and may be using legislatively-mandated instructional materials developed for the State Board of Education, for personal gain and to promote a highly politicized and divisive curriculum in K-12 classrooms throughout the state,” wrote AMCHA Initiative, California Association of Scholars, and Californians for Equal Rights to CSUN President Erika D. Beck and California School Board of Education President Linda Darling-Hammond.

The letter provided evidence that LESMC is using the CSUN name and state-developed instructional materials while advertising “packages and experts” at a cost. The groups noted that such behavior likely violates California Code, Education Code – EDC § 89005.5 and California Code, Government Code – GOV § 19990.

All three of LESMC’s founders are state employees. Two are faculty in the Chicano/a Studies Department at CSUN — Theresa Montano and Stevie Ruiz — and the third, Guadalupe Carrasco Cardona, has taught in public high schools in California and is an adjunct lecturer at CSU Long Beach. In 2019, Montano and Cardona were members of the SBE-appointed Ethnic Studies Model Curriculum Advisory Committee and responsible for helping to develop the highly controversial and highly politicized first draft of the ESMC, which was met with enormous criticism from the public, state legislators and Governor Newsom, and was ultimately rejected by the SBE.

“We believe the LESMC founders must not be permitted to use the name of a state supported university and other taxpayer-funded resources for advancing their own personal and political interests, and we hope your respective offices will promptly investigate this matter,” concluded the organizations.

Last year, AMCHA exposed that after the original curriculum was rejected by the state and was already undergoing a complete overhaul, these same curriculum drafters were sidestepping the state process and directly lobbying individual California school districts to support their widely criticized curriculum. When approaching school districts, they did so without revealing the curriculum had already been rejected. At least 20 districts have fallen for this charade and adopted it. These same individuals then went on to form LESMC to further promote the rejected first draft as well as to offer school districts their professional assistance with implementing the controversial curriculum in district schools.

AMCHA has also been leading an effort to expose the dangers that a curriculum based in Critical Ethnic Studies poses to all California students, and particularly Jewish students. Last year, AMCHA organized a letter from 80 organizations that urged California Governor Gavin Newsom to veto a bill, AB 331, that would have mandated high school students take a course based on the Ethnic Studies Model Curriculum, and he did. However, a new bill has recently been introduced in the state legislature to replace AB 331. And last month, 35 scholars and academics, including AMCHA co-founder Dr. Leila Beckwith, found serious methodological flaws and a significant lack of evidence in the research hailed as the rationale for developing California’s Ethnic Studies Model Curriculum. The scholarly review found a misrepresentation of social science research and insufficient evidence to support the bold claims made about the curriculum’s educational benefits.

In 2016, California state legislators passed a bill, AB 2016, mandating that the state’s Department of Education (CDE) develop a model ethnic studies curriculum for use in high school ethnic studies courses. Although the bill stated that the goal of such courses was “preparing pupils to be global citizens with an appreciation for the contributions of multiple cultures,” the politically motivated educators appointed by the CDE to help draft the model curriculum developed a curriculum firmly rooted in Critical Ethnic Studies. Unlike the broad field of ethnic studies, with its goal of understanding and celebrating the contributions of California’s and our nation’s diversity, Critical Ethnic Studies is a narrow, highly politicized conceptualization of the field that limits its focus to specific identity groups, is firmly rooted in ideologies that divide society into oppressed and oppressor groups based primarily on race and class, and, as part of its disciplinary mission, uses the classroom to indoctrinate students into narrow political beliefs and activism. A lesson included on Jewish Americans portrays them as racially privileged and clearly on the oppressor side of the race-class divide. And the discipline as a whole is historically anti-Zionist and anti-Semitic.

AMCHA monitors 450 college campuses across the U.S. for anti-Semitic activity. The organization has recorded more than 3,500 anti-Semitic incidents since 2015. Its daily Anti-Semitism Tracker, organized by state and university, can be viewed here.

AMCHA Initiative is a non-partisan, non-profit organization dedicated to combating anti-Semitism at colleges and universities in the United States.