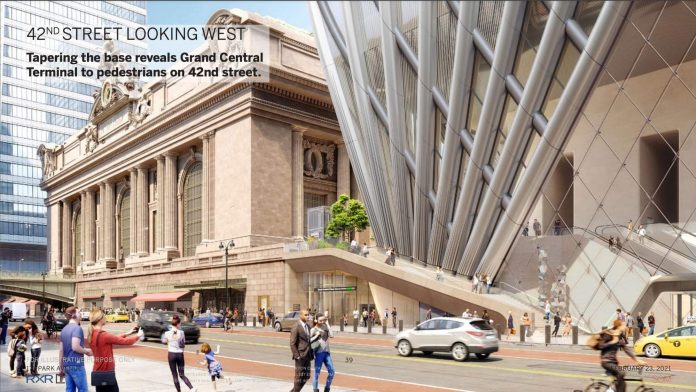 At a public hearing in New York City on Tuesday, a vote was taken by the Landmarks Preservation Commission in which approval was granted for Project Commodore, a proposed 1,646-foot supertall skyscraper in Midtown East, as was recently reported on the Yimby.com web site.

According to renderings that were produced by developers, the building which is projected to stand at 83 stories high will replace the Grand Hyatt Hotel at 175 Park Avenue and rise between the 108-year-old Beaux Arts Grand Central Terminal and the 91-year-old Art Deco Chrysler Building at the corner of East 42nd Street and Lexington Avenue, as was reported on Yimby.com.

The developers of the project are RXR Realty and TF Cornerstone and the designer of the structure is Skidmore Owings & Merrill.  According to the report on Yimby.com, the skyscraper is projected to yield “500 Hyatt hotel rooms on the upper floors spanning 453,000 square feet; 10,000 square feet of retail space on the ground, cellar, and second levels; new elevated, publicly accessible plaza space overlooking the surrounding Midtown neighborhood; and 2.1 million square feet of Class A office space.”

The Landmarks Preservation Commission granted its imprimatur for the project earlier in the week and as reported by Yimby.com the decision to approve it was predicated on   two critical advisory reports in the development of the project. In the end, it passed in the voting process with an overwhelmingly favorable vote on the architecturally “harmonious relationship” of the edifice with the adjacent Grand Central Terminal, as was reported by Yimby.com. In addition, there was a 10-0 vote on the improvement to viaduct passageways and the proposed 42nd Street passage that would help to more efficiently enhance the circulation of commuters walking among the ground floor, sidewalks, and subterranean levels of the complex, as was reported by Yimby.com.

The new rectangular concrete core for Project Commodore will be surrounded by four huge corner columns that will act as anchors for the superstructure. All of these critical structural components would have to be squeezed within the layout of this dense space upon the demolition of the 41-story hotel, according to the Yimby report.

Moreover, many of the textures and the choice of exterior materials for Project Commodore derive from and respect the architectural quality of Grand Central Terminal’s proportions, ornamentation, and iconic stone and glass façade, as was reported by Yimby.com.