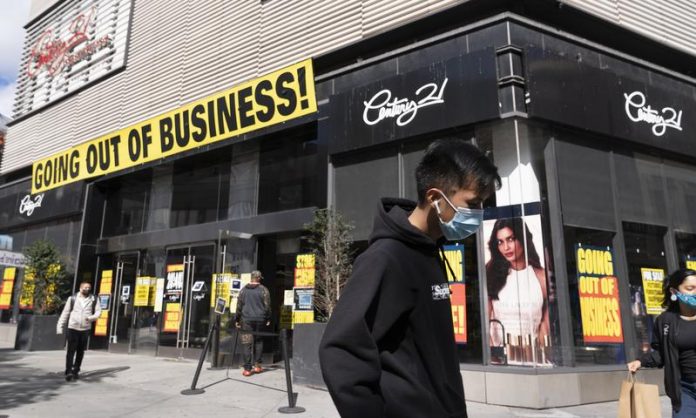 Despite the fact that both major and minor retailers across America have been devastated due to the deleterious effects of the coronavirus and the resultant economic meltdown, there is some good news on the horizon.

For those citizens of South Korea who have strong proclivities towards shopping in a brick and mortar store and for those who adore quality products at bargain-basement prices, options of this kind will be coming your way.

After declaring bankruptcy in September of 2020 and liquidating merchandise from all of its stores, the famed Century 21 department store,  (originally based in New York City) is now experiencing a rebirth of sorts in Busan, South Korea, according to a Women’s World Daily report.

At the time of the announcement of their bankruptcy Century 21 joined more than two dozen retailers who have filed for bankruptcy since the pandemic, which forced non-essential stores to temporarily close, according to an AP report.

In a statement, the New York-based company said that the decision followed nonpayment by the company’s insurance providers of approximately $175 million due under policies put in place to protect against losses stemming from business interruption. Insurance money helped it rebuild its flagship store, a magnet for locals and tourists in downtown Manhattan after it was damaged by the 9/11 attacks, the company said.

“We now have no viable alternative but to begin the closure of our beloved family business because our insurers, to whom we have paid significant premiums every year for protection against unforeseen circumstances like we are experiencing today, have turned their backs on us at this most critical time,” said Century 21 co-CEO Raymond Gindi in statement, according to the AP report.

Gindi said that if Century 21 had received “any meaningful portion” of the insurance proceeds, it would have been able “to save thousands of jobs and weather the storm in hopes of another incredible recovery.”

What spurred the reopening of Century 21 in South Korea was that the Gindi family who founded, owned and operated the department store chain had decided that during the process of bankruptcy, they would buy back the intellectual property along with a silent partner in the amount of $9 million. This buy back happened in November of 2020.

The Gindi family had a unique gem in the Century 21 stores in that they offered shopping the “off-pricer” which essentially translates into having their choice of luxury items at substantially discounted prices. According to a report on Yahoo News, the typical Century 21 discount ran about 40 to 65 percent off and up to 90 percent off on clearance items. When Century 21 was riding high, they were raking in about $700 million a year.

The famed Gindi family, who are known not only for their business acumen but also for their outstanding philanthropic endeavors have brought in some new blood to assist them in reclaiming their piece of the pie in the retail market.  Putting their heads together, the Gindi brothers have recruited    Marc Benitez, a former executive at Coach, Kenneth Cole, Authentic Brands Group, and most recently the CAA-GBG brand management group, according to a report on Yahoo news. He’s been named president of Century 21 Stores and will report to Raymond, Isaac, Eddie and I.G. Gindi, as was reported by Yahoo.

Raymond Gindi told Yahoo News that,  “last year was particularly devastating for many people around the world, and extremely hard for us, as a family business. My dad and his partner started Century 21 60 years ago. We really thought we would get through the year, but it kind of all happened kind of quickly.”

When the Century 21 bankruptcy was initially made public, it sent shockwaves throughout the industry and loyal shoppers were aghast at the development.

For public consumption, the Gindis stated that their decision to close shop was predicated on the pandemic’s negative impact on the economy and their inability to recover disaster insurance. A lawsuit against the insurance company is pending, according to the Yahoo News report.

In the interview with Yahoo News, Raymond Gindi said, “What was comforting was the outpouring of emotion from all different sources. We were getting inundated by people egging us on, telling us you just can’t let it be over. That’s what spurred us on. It’s our legacy. It’s our family business. We’ve got to roll up our sleeves and get back in there.”

“Century 21 will open in Korea, most likely in late summer 2021,” said Benitez, according to the Yahoo News report.  “It will be freestanding, nine levels, with approximately 100,000 square feet with a lit facade. The sheer magnitude of visibility will be unparalleled.”

The store is licensed to a retail operator that Benitez declined to mention at this point. Many brands and vendors have already been contacted about the overseas store, Century 21’s first ever.

Yahoo News reported that Century 21 always drew many shoppers from overseas, specifically from South Korea, Gindi said, adding that before the coronavirus outbreak, the family was interested in expanding abroad and had received overtures from interested parties in South Korea. “We went on hold because of the pandemic. Part of the reason for this restart is that they kept in contact with us,” said Gindi.

“Korea was a part of the plan in regard to our long-term strategy. Koreans were always fans of Century 21, and we began rethinking our iconic destination in ways to bring it to their soil,” said Gindi, referring to the former lower Manhattan store, which was on Cortlandt Street.

“In comparison to the U.S., Korea represents a fraction of COVID-19 cases and, grimly, the COVID-19 deaths. It’s a beacon of hope in regards to controlled measures to cope with COVID-19. Businesses there are thriving and continue to attract consumers.”

Yahoo News reported that the new Century 21 could expand to other countries. “We are vigorously looking into opportunities to start opening stores around the world, in China, Hong Kong, Europe, Canada, Australia and South America,” Benitez said, though outside of Korea, no other stores are set but conversations are happening.

Asked about possibly reopening stores in the U.S., Gindi replied, “We believe a New York City flagship is important. It could be on 34th Street or in Times Square. But we are not working on that now. I don’t think the U.S. is ready for it. The customer and traffic are not back yet,” Gindi said, with COVID-19 raging across the country. “It will take time to refigure what the strategy is for us going forward in the U.S.”

The executives said after Korea, the next growth move could be to restart e-commerce, and within a month, Century 21 will be active again on social media, according to the Yahoo News report. “We will be reactivating that engagement with loyal followers,” said Benitez. “In terms of storytelling, we are going to look to consumers to help us narrate that story, to share their favorite purchases, or a favorite Century 21 experience.”

“My role as president is to insure the DNA of the business and the Gindi family values are always met but the consumer-facing opportunities are going to be met in a way that’s a little more modern,” he added.