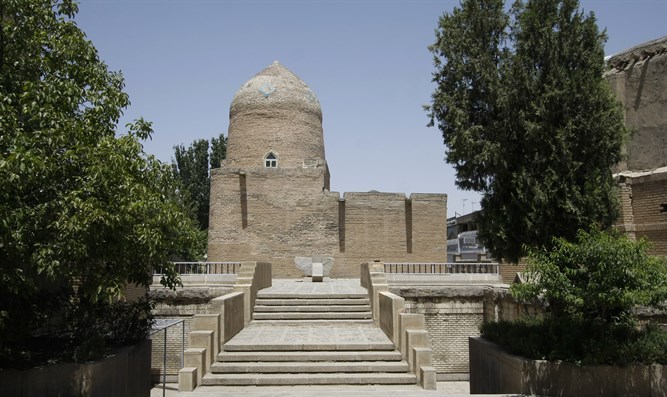 A French Jew takes us on a tour of the ancient tomb of the biblical Queen Esther and her uncle Mordechai. Both Esther and Mordechai are featured prominently in the story of salvation and indomitable faith that is contained in Megillas Esther which is read publicly on the holiday of Purim. Purim falls on the 14th of Adar.  The tomb of Esther and Mordechai is located at Hamadan in Iran, within a mausoleum believed to have been built in the 1600s, and is first attested in the 11th century.

Benjamin of Tudela visited the city, in which he reckoned there were 50,000 Jewish inhabitants, and described the tomb as in front of the synagogue. Shahin Shirazi, in his 14th century Ardashir-nāmah, was the first known Persian Jew to write of the dreams of Esther and Mordechai and of a journey they made to Hamadan, stating they died in the synagogue and within an hour of each other. The narrative of Shirazi may derive from earlier Judaeo-Persian sources, now vanished.

According to the National Library of Israel, a French explorer at the outset of the 20th century discovered jewels in a niche located in the mausoleum’s ceiling, and deposited them in the Louvre. A crown among the cache, it adds, are believed by the Hamadan Jewish community to have belonged to Esther.

In 1850 J. J. Benjamin visited the place, writing that some 500 Jewish families lived there, with three synagogues. The tombs he described as situated in a magnificent building just inside the city walls, which the local Jews visited monthly, and where on Purim the Book of Esther was read and the tombs were stuck with the faithful’s palms.

Ten years later, Yehiel Fischel Castelman also praised the tombs’ magnificence, quoting the locals’ tradition that it was built by one Cyrus, Esther’s son; a date was inscribed on the dome, but he was unable to read it.

Jakob Eduard Polak, in the same decade, described the shrine as the only place to which Persian Jews made pilgrimages and wrote of it as the center of the Jewish quarter and their sole national holy place in Persia. He recorded inscriptions on the oaken coffins inside: the final sections of the Book of Esther, together with names of three donors who had contributed to refurbishment, and a date of 1309/10 CE. In a separate room, the date 1140 CE was inscribed. The Irani government maintains that the current structure dates back to the Ilkhanate, and a Hebrew inscription dating the construction of the structure to “1-4-5-7” (albeit written incorrectly) was recorded by a traveler in 1910.