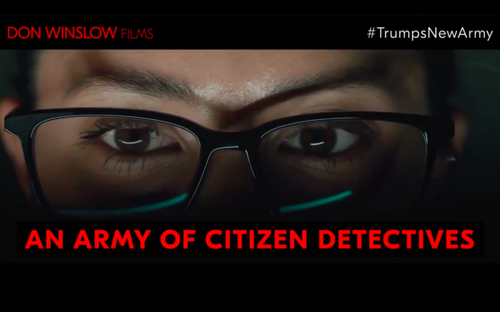 A new viral video calling on liberals to form “an army of citizen detectives” to gather information on Trump supporters and report their activities to the authorities has racked up thousands of shares and millions of views in just a few hours.

Don Winslow released this incredible piece of dangerous propaganda, which encourages Americans to root out Trump supporters from society.

Viewers are shown footage from Trump rallies while being told that they are looking at “radical extreme conservatives, also known as domestic terrorists”.

“They are hidden among us, disguised behind regular jobs,” Winslow warns.

“They are your children’s teachers. They work at supermarkets, malls, doctor’s offices, and many are police officers and soldiers.”

“We have to fight back,” Winslow declares.

“In this new war, the battlefield has changes. Computers can be more valuable than guns. And this is what we need now more than ever: an army of citizen detectives. I’m proposing we form a citizen army. Our weapons will be computers and cellphones. We, who are monitoring extremists on the internet and reporting our findings to authorities. Remember, before the Navy Seals killed Osama Bin Laden, he had to be found. He was found by a CIA analyst working on a computer thousands of miles away. It’s up to you.”

Leftists on Twitter have built themselves into a frenzied state of mind after watching this professional political propaganda reel, which is reminiscent of late-era Weimar Republic Germany. This is dangerous political propaganda, and incidentally, Twitter is not censoring it.

TJV does not advocate censoring this insidious propaganda but encourages discussion as to what the actual message in this video is. It appears to paint all Trump supporters as dangerous traitors and wants people to somehow “gather information” on them. It is vague, but extremely dangerous and will create a dangerous environment in America if taken to heart.

After watching the video leftists have responded aggressively:

“Good riddance. But his ‘army’ is still here, hiding amongst us. They are traitors. They are evil. And they MUST be rooted OUT.”

Yes, in America currently a large group of politically motivated individuals are calling for those who supported President Trump to be “rooted out”

“We have TERRORISTS in our midst. Some of us KNOW these people. It is our patriotic DUTY to expose them.” another deranged individual posted after watching the dangerous propaganda.

Caitlin Johnstone, a liberal commentator, pointed out how this video is making people “crazy and scary”

Johnstone wrote: The fact that Winslow stays very vague about what he means by “Trump’s new army” and constantly conflates rank-and-file Trump supporters with white supremacist terrorists means people are effectively being pointed at all Trump supporters, especially when normal Trump rallies are what he points to in the video. If this takes off it can very quickly lead to a volunteer army of power-worshipping snitches against literally anyone who is critical of US foreign policy or the Democratic Party, whether they actually support Trump or not.

“In fact just following the trending hashtag I’m noticing Twitter users saying this means targeting all Trump supporters, so clearly that is the message that’s being absorbed”, she pointed out.

The radical left are fomenting a political divide like nothing we have ever witnessed in America, with Trump being gone they are emboldened to go after anyone who does not think like them, and they are literally calling for anyone who supported Trump to be investigated, blacklisted, and in other cases, as we have pointed out, sent to re-education camps.  They are using the January 6th disaster at the capitol as a catalyst to totally wipe out their perceived enemies. This is coming at a time where the new president is imaging his campaign as “healing”

Here is the dangerous propaganda video which is stirring up hatred, division, and a terrifying new environment in America

On January 20th Donald Trump will no longer be The Commander in Chief.

He will lose control of the U.S. Armed Forces and take control of a NEW ARMY. pic.twitter.com/59MHHaIegP