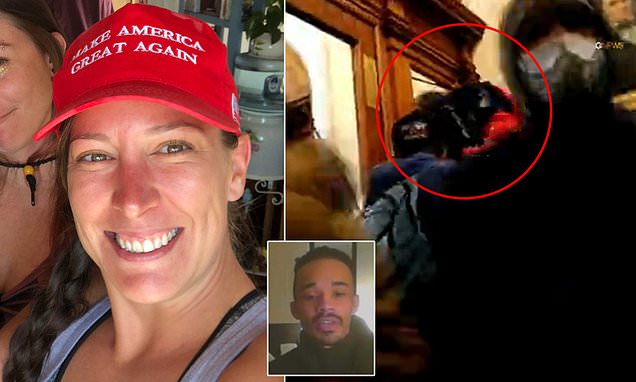 As the mainstream media quickly buries the cold-blooded execution of US Air Force Veteran, Ashli Babbitt, the San Diego woman who was murdered as she made her way into the Capitol building on Wednesday along with other Trump supporters during the massive protest over the alleged rigged election, her death has been quickly swept under the rug. The few mentions of her heartless execution have been limited to a sentence or two.

Other entities have quickly rushed to assassinate the veteran’s character, pointing out that she was affiliated with the alt-right and followed conspiracy purveyor, Q-ANON.

Daily Mail of the UK  reported:

Babbitt also appeared to be a supporter of QAnon, having posted a series of images to Twitter in early September, showing her attending a Trump Boat Parade in San Diego, wearing a tank top with the conspiracy group’s logo and slogan on it.

Other posts to her social media page indicate as though she supported conspiracies that Chief Justice Roberts and other high profile politicians in DC engaged in pedophilia. She also referred to California’s lockdown orders as ‘Commie bulls***’ in December, and referred to the COVID-19 pandemic as a ‘f***ing joke’. In September, she wrote, ‘Trump 2020 landslide! Let freedom ring!’

Babbitt also posted a chain of videos on Twitter in 2018, expressing anger over California’s Democratic politicians in a rant about immigration at San Diego’s southern border, accusing them of ‘refusing to choose America’ over their political party.

In other words, because her political beliefs were not in sync with the so-called “mainstream” her death was considered inconsequential.

Has anyone really taken notice of the abject silence on the part of anti-police activists regarding Babbitt’s death? There is no question the woman was unarmed, nor was she attacking a police officer, yet she was shot to death for no apparent reason. After months of protesting and rioting against police brutality, nobody seems to care about Babbit’s death.

Well, Babbitt was a Trump supporter and purportedly subscribed to conspiracy theories, so who cares that her life was snuffed out, right?

More videos have emerged from the tragedy, giving us a better picture of the incident. In this first video, as you can clearly see, the gunman was hiding as Babbitt tried to go through the broken window in the Capitol building. It appears that the gunman was not a Washington, DC cop but quite possibly a secret service agent or part of a private security team. Some investigative journalists claim the shooter was part of Vice President Pence’s security. The first graphic video is below.

In yet another intriguing development, a Black Lives Matter activist named John Sullivan recorded a video in the immediate aftermath of the shooting which shows police with guns drawn and Babbitt lying in a pool of blood in a stairway inside the Capitol. This was made reference to by Zero Hedge and the Daily Mail of the UK. While being interviewed by CNN’s Anderson Cooper, Sullivan described the scene of the shooting, however, Cooper neglected to ask the radical activist what he was doing at the nation’s capitol?

John Sullivan – founder of the far-left organization “Insurgence USA” who made headlines in July after he was arrested for intimidating drivers in Provo, Utah.

In July, Sullivan was raising hell in Utah, talking about how his activist group is “strapped” and ready to “burn that S**t down” as he was engaging in gun battles with “white militias”.

Meet BLM criminal John Sullivan was arrested for threats and violence against conservatives in Utah!

John was interviewed on CNN about the film he took inside the CAPITOL of Ashli Babbit lying in a pool of blood dying – WHY was he there?

Why was an insurrectionist from the BLM movement at the Trump rally in Washington on Wednesday? What was his real motive? Was he a guest of a left-wing congressional representative? Was he blending in with the Trump protestors and perhaps surreptitiously posting himself as a provocateur? Was he just there to film the event? The individual is a regular at BLM protests. Why was he at a Trump event?

Here is a still from Anderson Cooper 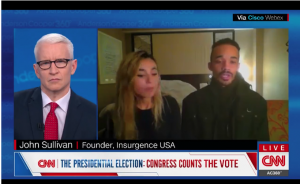 One must consider the following questions: Why is Babbitt’s death being hushed up? Why has the shooter not been identified as of Thursday, January 7th; a full day after the execution? Why was a  BLM activist on the scene?

In this graphic video taken from another angle, you can actually see John Sullivan filming the shooting, (on the left-hand side of the screen), when the video is replayed if you look carefully. This video was provided from The National File.

In this final video provided by TMZ, Babbitt is interviewed as she is taking part in the protest; shortly before her demise. She is excited to have just heard the president speak and is genuinely inspired by the massive turnout at the protest. Take particular notice of her jubilant demeanor and remember her as a veteran, wife, and mother, for her execution will be thrown down the memory hole and the media will never mention her again.

They will try to make you forget that she ever existed and they will surely not follow up on the lawsuits which her family will undoubtedly file after the facts emerge in her wrongful death.