Response From All Sides of the Aisle in Aftermath of D.C Chaos, Jan 6th Becomes a Day of Infamy - The Jewish Voice

Response From All Sides of the Aisle in Aftermath of D.C Chaos, Jan 6th Becomes a Day of Infamy 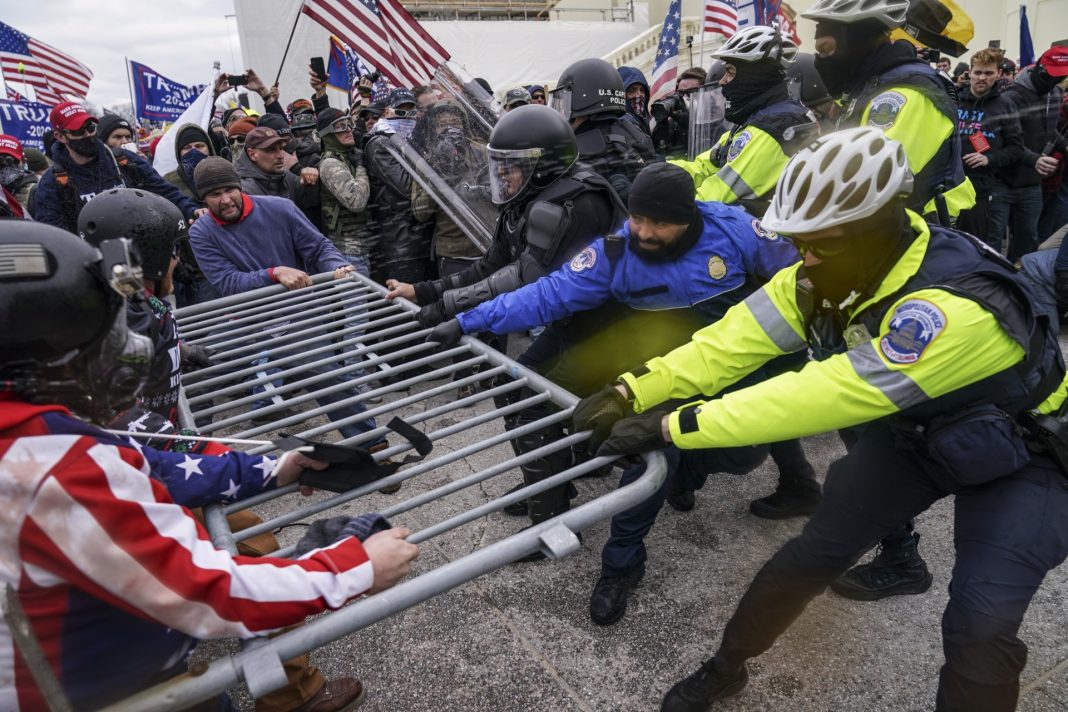 The U.S. Capitol was secure once more, hours after supporters of President Donald Trump breached the historic building.

Mayor Muriel Bowser declared a 6 p.m. curfew for Washington, DC, on Wednesday shortly after protesters stormed the United States Capitol in an effort to disrupt the certification of the 2020 presidential election. National Guard and law enforcement finally got control of the situation after the chaotic scene unfolded.

Many witnesses in the mostly peaceful protest stated that the initial “Save America” event was lacking police presence as nearly 500,000 people gathered to hear the president lash out against alleged voter fraud. At the conclusion of the president’s speech, the more aggressive of the hundreds and thousands of MAGA supporters stormed the capital and created a scene which was unlike we have ever seen in the halls of the senate. Reportedly there have been under 20 arrests, proving the poor policing of this gigantic protest.

Reactions are coming in from all sides of the aisle.

Sen. Tom Cotton, R-Ark., called for an end to the ongoing violent protest that led to supporters of President Donald Trump storming the Capitol building while Congress was in session.

”This violence is unacceptable and needs to be met with the full force of the law,” Cotton tweeted on Wednesday. ”God bless the Capitol Police who are keeping us safe.”

He added, ”Violence and anarchy are unacceptable. We are a nation of laws. This needs to end now.” Cotton was joined by several other Republican members of Congress, including Reps. Adam Kinzinger of Illinois, as well as Chip Roy and Michael McCaul of Texas.

‘I like many people voted for President Trump in the 2020 election and hoped for a different result,” McCaul tweeted. ”But violence and destruction is not the way to express your grievances. This is disgraceful and has to end.”

Senate Minority Leader Chuck Schumer (D-NY) used a speech on the Senate floor Wednesday evening to attack President Donald Trump and “the people who follow him” in the wake of deadly riots that overran the Capitol earlier in the day. Schumer said;

But make no mistake, make no mistake, my friends, today’s event did not happen spontaneously. The president, who promoted conspiracy theories and motivated these thugs, the president, who extorted them to come to our nation’s capital, egged them on, he hardly ever discourages violence [sic], and more often encourages it [sic]. this president bears a great deal of the blame. This mob was in good part president trump’s doing, incited by his words, his lies. This violence, in good part, his responsibility, his everlasting shame.Today’s events certainly, certainly would not have happened without him. Now, January 6 will go down as one of the darkest days in recent American history, a final warning to our nation about the consequences of a demagoguic president, the people who enable him, the captive media that parrots his lies, and the people who follow him, as he attempts to push America to the brink of ruin. As we reconvene tonight, let us remember, in the end, all this mob has really accomplished his delay our work for a few hours.

“Their fantasy narrative has spiraled further and further from reality, and it builds upon years of sown resentments,” Obama wrote. “Now we’re seeing the consequences, whipped up into a violent crescendo.”

The former president said that Republican leaders should “choose reality” and stop stoking the “raging fires” of their supporters.

He described the protest at the capitol as a “moment of great dishonor and shame for our nation” but said that Americans would be “kidding ourselves” if they thought it was a surprise.

Obama praised some Republicans for speaking forcefully against Trump’s claims that the election was stolen from him.

“To those who wreaked havoc in our capitol today, you did not win. Violence never wins,” Pence said. “Freedom wins, and this is still the people’s house.”

“Today was a dark day in the history of the United States Capitol, but thanks to the swift efforts of US Capitol Police, federal, state, and local law enforcement, the violence was quelled,” Pence said.

On Wednesday’s broadcast of the Fox Business Network’s “After the Bell,” Rep. French Hill (R-AR) said President Donald Trump “has to bear some responsibility” for the riots at the Capitol and that his “tweets and his one-minute video were late and inadequate.”

Sen. Rand Paul (R-KY) stated that conservatives should support the Electoral College and not want it overturned by Congress and “that this heightened tension that everything’s been stolen, just has led to this feeling that nobody believes there’s any integrity anymore, and so, they’re just going to riot.”

Paul said, “You know, it wasn’t a good day for our country. People here are rattled. It brought back bad memories of being shot at at the ballpark a few years ago when we had the Congressional baseball practice.”

During an interview on the Fox News Channel on Wednesday, Rep. Michael Waltz (R-FL) denounced the riots at the U.S. Capitol as “unacceptable and a sad day for the country.”

Waltz said, “I just want to say, Dana, this is despicable. This is not who we are as a country. We were debating this through debate and discussion…members were objecting to people’s concerns. But there is no place for violence. I’ve served in places overseas in Africa and Afghanistan and other [places], where violence is how we solve our disputes. Not here in America. … This is unacceptable and a sad day for the country.”

Rep. Dan Crenshaw (R-TX) reacted to the riots at the Capitol and said that “so many people said this would be the last stand, the last fight, the last effort to win back the republic. It’s our 1776. When you use that kind of language, you should not be surprised that people tend to believe it.” And said that President Donald Trump and everyone else objecting to the Electoral College should go to those who stormed the Capitol and say “that they misled them.”

Crenshaw said, “This is not what you do and call yourself a patriot. There’s nothing to be proud of here. This is not okay. It should be condemned to the fullest extent.”

“Make no mistake, the President of the United States is responsible for this event,” Scott declared.

“President Trump has orchestrated a campaign to cause an insurrection that overturns the results of a free, fair, and legal election,” he said

During a statement on Wednesday, Rep. Adam Kinzinger (R-IL) slammed the riots at the Capitol as “a coup attempt,” and stated that President Donald Trump “incited this coup, encouraged it, and did little to protect the Capitol and the Constitution.”

Kinzinger said, “My fellow Americans, what we all saw today at the U.S. Capitol is not the America that stands as a beacon of freedom and hope for the world. The storming of the Capitol was a coup attempt, with the purpose of overturning the election of a duly-elected president. The current president incited this coup, encouraged it, and did little to protect the Capitol and the Constitution. I stand to reject this chaos and to condemn the president for allowing it to happen.”