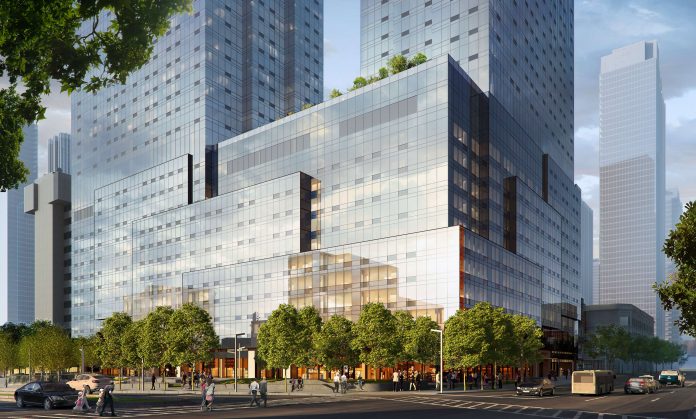 It looks like Jersey City is about to get spruced up in a major way. On Monday, the YIMBY real estate web site reported that despite intense litigation and legal disputes, the Jersey City Planning Board has officially given the green light to the Kushner Companies to begin construction on a two-skyscraper complex in downtown Jersey City at One Journal Square. It is designed by Woods Bagot, and according to the YIMDY report, the buildings will take up 2 million square feet and stand 710 feet tall.

According to the YIMBY report, the project is expected to break ground this spring and the building team has released final renderings. The report also indicated that tenant occupancy of the skyscrapers could begin as early as fall of 2025.

There will be 211 residential units spread across the nine floors, 883 parking spaces distributed across 10 floors, and one floor each for shared services and retail. Together the towers yield an additional 1,325,381 square feet of residential space across the 51 floors, and also one floor of amenity space. The north tower will have 755 units and the south tower will have 757 units, in a mix of studios, one-, and two-bedroom residences. In addition to that mix, the podium will also have 36 three-bedroom homes.

The residential component will comprise 1,723 rental apartments with 93 studios, 972 one-bedrooms, 222 two-bedrooms, and 36 three-bedroom units. Amenities will include a full-size basketball court, a pool, and an outdoor roof with an enclosed dog run, a party area, children’s spaces, barbecue grills, and communal seating, according to a report on YIMBY.

YIMBY reported that as part of negotiated development terms, Kushner Companies will also create a lively plaza with water features, light landscaping, improved sidewalks and lampposts, and public seating, and has agreed to make a $2.5 million investment in local arts programs.

Additional components include 41,000 square feet of retail and parking area for 883 vehicles.

As illustrated in the latest renderings, both towers will rise from a shared ten-story podium. The structures’ façade is uniform throughout and will primarily include reflective glass and steel materials. (Yimby.com)