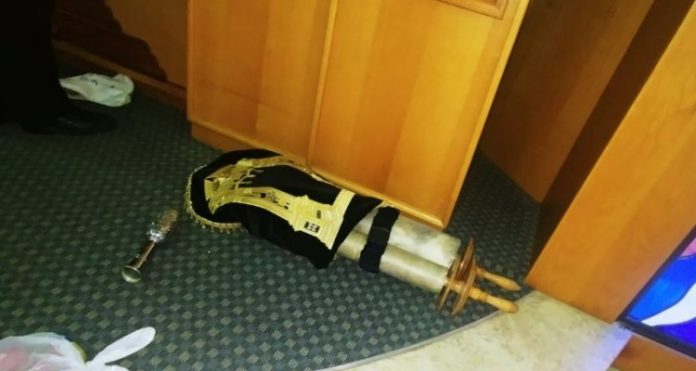 At two synagogues in Petah Tikvah that were broken into, thieves robbed boxes of charity money, threw the Torah scrolls on the floor and stole the valuable religious decorations, the Srugim news website reported Monday.

Police opened an investigation into the thefts at the Ahavat Daniel and Chen Hatzafon synagogues, where the perpetrators broke into the ark containing the Torah scrolls and threw them on the floor, but they stole the silver ornaments that traditionally adorn the scrolls.

“The burglars were not satisfied with taking the money but also looted Torah scrolls,” Petah Tikvah Mayor Rami Greenberg said in a statement. “An incident like this cannot be tolerated, which is why city security officials and the police will do everything possible to bring the vandals to justice.”

Yisrael Friedman, chairman of the local branch of the United Torah Judaism political party, said that the images of the desecration of the synagogues hurt everyone with a Jewish heart and that the fact that there were several synagogues indicated that it was a calculated and planned act.

Although Torah scrolls are expensive, costing approximately 85,000 shekels ($26,000) and up, their large size and greater difficulty to resell may have prompted the thieves to leave them behind.

Dropping a Torah scroll on the floor is considered a tragedy and traditionally the person responsible, and sometimes all of those who were present at the time of the incident, are obligated to fast during daylight hours for 40 days. However, in modern times the fasting is reduced and supplemented or replaced by giving to charity.

A member of one of the synagogues filmed the damage with his smartphone, sobbing as he described the vandalism and showing a Torah scroll on the floor.

“Sick minds broke into the synagogue and desecrated the holy house,” the man said. “How are people able to do such a thing?”

With Israel under a national coronavirus lockdown, indoor prayer and group Torah study has been banned and most synagogues have been complying with health regulations – meaning the building had been empty of people.

“It’s not enough that God has given us the coronavirus,” he cried. “To desecrate like this. To break things like this. To destroy like this,” he said as he showed the broken door to the synagogue office and cupboards that had been broken into. (World Israel News)

Netanyahu to Fox News: Coronavirus is Behind Israel