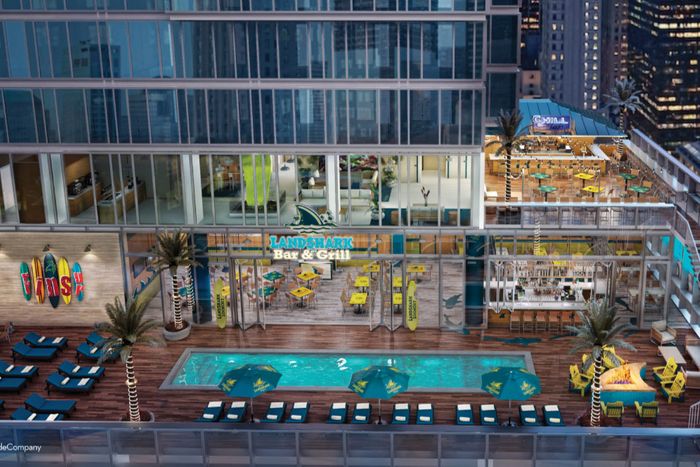 Despite the fact that businesses have been ravaged due to the deleterious effects of the coronavirus, New Yorkers have something to look forward to. According to a recent New York Post report, iconic singer and entrepreneur, Jimmy Buffett has plans to bring his  Margaritaville Resort empire to Times Square in this spring.

The glitzy resort was originally scheduled to make its debut in the fall of 2020, but was upended by the coronavirus. Located in a 32-story building on the southern edge of Times Square at 560 Seventh Avenue, the new Midtown headquarters for Buffett fans will   feature 234 guest rooms, 4,861 square feet of ground-floor retail space, five restaurants and bars including License to Chill Bar, 5 O’Clock Somewhere Bar, Landshark Bar & Grill, Joe Merchant and Margaritaville Restaurant, as was reported by the Post.

Curbed reported that the tower replaced a six-story building that housed the former fashion campus of the Parsons School of Design and a synagogue on the first floor, known as the Garment Center Congregation temple.

Prior to deal being inked between Buffett and developers Sharif El-Gamal of Soho Properties and MHP Real Estate Services, the proposed building was meant to house a Dream Hotel, according to the Curbed report.

The Post reported that the building where the Margaritaville Resort is to be housed is the only one in Times Square with an outdoor pool, rooftop views and a State of Liberty replica. Buffett currently has about 22 resort properties across the U.S. and the Caribbean, as was reported on the Curbed web site. The project is expected to cost around $300 million to build.

Curbed reported that the Garment Center Congregation synagogue was given a 99-year lease for $1 a year in the 1970s. In order to purchase the building, Soho Properties’ El-Gamal had to negotiate with the congregation, and he agreed to build a synagogue (complete with a kosher kitchen and a small terrace for a sukkah) in the new building. The synagogue’s lobby will be on the first floor, and it will also occupy two below-ground levels. This will be the first synagogue in Margaritaville.

According to the Margaritaville website the guest rooms at the resort will feature an island-inspired casual design and luxurious comfort. The site says that the ambience will “instantly transport guests to the iconic Margaritaville state of mind. The resort’s fun and relaxation will bring a much-needed escape from the everyday hustle and bustle of New York City.”