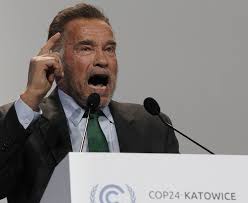 Joining in the chorus of those who are bashing President Trump for purportedly using inflammatory rhetoric to charge up the crowd of his supporters who breached the Capitol on Wednesday is former California governor and Hollywood action movie star, Arnold Schwarzenegger.

In a video posted to social media on Sunday, the 73-year old actor issued a stinging rebuke of Trump, saying that he “will go down in history as the worst president ever.”

Schwarzenegger had the colossal audacity to draw a comparison of the attack on the Capitol to Kristallnacht, which took place on November 9-10, 1938. This horrifying pogrom marked the beginning of the darkest days of the Holocaust and the mass genocide of the Jews, Jewish stores and shops were vandalized, windows were broken and Nazi thugs sadistically attacked and murdered Jews in Germany.

My message to my fellow Americans and friends around the world following this week’s attack on the Capitol. pic.twitter.com/blOy35LWJ5

The Hollywood muscle man also voiced an analogy to American democracy to a weapon he wielded onscreen in the loincloth of Conan the Barbarian nearly 40 years ago, saying: “Our democracy is like the steel of this sword. The more it is tempered, the stronger it becomes,” as was reported by the Guardian of the UK.

Beginning his video with his wish to “say a few words to my fellow Americans and to our friends around the world about the events of recent days,” Schwarzenegger said, “I grew up in Austria and was very aware of Kristallnacht, or the Night of Broken Glass. It was a night of rampage against the Jews carried out by the Nazi equivalent of the Proud Boys.”

Schwarzenegger added that, “Wednesday was the Day of Broken Glass right here in the United States. The broken glass was in the windows of the United States Capitol. But the mob did not just shatter the windows of the Capitol. It has shattered the ideals we took for granted. They did not just break down the doors of the building that housed American democracy. They trampled the very principles on which our country was founded.”

The “Terminator”  star then described his dysfunctional childhood while growing up in Austria and how his father who joined the Nazi party would verbally and physically abuse him and his mother.

He concluded his tendentious rhetoric by saying, “President Trump is a failed leader. The good thing is he soon will be as irrelevant as an old tweet.”

In 2012, it was reported that Schwarzenegger allegedly praised Adolf Hitler in his autobiography entitled, “Total Recall.” The actor admitted to lauding the brash speaking style of Nazi leaders but claims he opposed Hitler’s policies.

“I philosophized that only a few men are born to lead, while the rest of humanity is born to follow, and went from that into discussing history’s great conquerors and dictators,” Schwarzenegger wrote in his book. “I admired Hitler’s speaking ability, though not what he did with it.”

“Coming up with outrageous things to say was easy because I was always thinking them to keep myself entertained,” he wrote in Total Recall.

“I admired Hitler, for instance, because he came from being a little man with almost no formal education, up to power,” Schwarzenegger reportedly said in 1975 while making the film “Pumping Iron.”

While married to Kennedy family heiress Maria Kennedy Shriver, (the daughter of Eunice Kennedy), Schwarzenegger had a secret affair with his housekeeper, Mildred Patricia Baena and had an illegitimate son.

Schwarzenegger admitted to the infidelity in 2011, when his offspring Joseph Baena was 14 years old. Until that point, Joseph had no idea that the movie star was his biological father.

The admission of infidelity cost his 25-year marriage to Kennedy-Shriver. The couple had four children.

It was also reported that Schwarzenegger was spent much of his life as a womanizer. While working out at the gym and lifting weights, the muscle man had countless affairs with women.