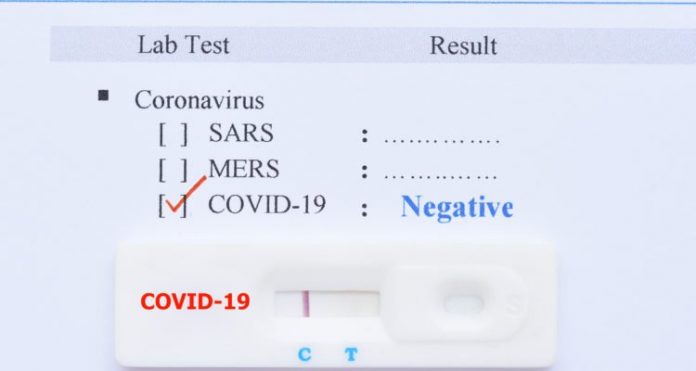 An investigation by Kan News Sunday has revealed that a fake negative Covid-19 test result is just a few clicks away on your phone or computer, and cheap at that.

Finding a bot on Telegram called “Corona test results,” the reporter sent a false name, date of birth, passport and ID numbers, and paid a £ 25 fee (about 110 shekels) to a bitcoin wallet. A fake clearance arrived just a few minutes later, supposedly from Poriyah Hospital in Tiberias. A receipt duly followed from a company called Elastic-fantastic.

Many countries now require that people entering their borders need to have proof dated within 72 hours of travel that they are not infected by the coronavirus. The demand for this basic level of protection has led criminal minds to figure out how to profit off those who need to travel, don’t like waiting in line or for results that can take a day to arrive, or, in the worst case scenario, may be positive for the disease.

The Israeli police arrested four people in September on suspicion of running a similar operation, but that may only be the tip of the iceberg. A Kan investigator found someone to put together a fake test result, in this case for a fictitious Israeli returning from Dubai.

In that case, the counterfeiter said that he would need a real corona certificate in order to do a mock-up.

It was an even simpler task if the traveler was ill, with a positive test in hand, she was told.

“That’s the easiest,” the criminal told the reporter. “Send me the form and I’ll change it to be negative… As it is, this test is as reliable as sh**.”

When she expressed nervousness about the fake form passing muster in the airport, he told her that the airport authorities “wouldn’t check the form because you are an Israeli citizen.”

Former senior police investigator Dr. Susie Ben Baruch told Kan News that once the special “green passports” allowing people to travel because they have had the vaccine become commonplace, a way must be found to detect counterfeits.

“We have to sit down immediately and solve the problem of how this green passport will contain some kind of sign to show that it’s fake or real, like there are in our banknotes, like we have in our ID cards,” she said.

Netanyahu to Fox News: Coronavirus is Behind Israel