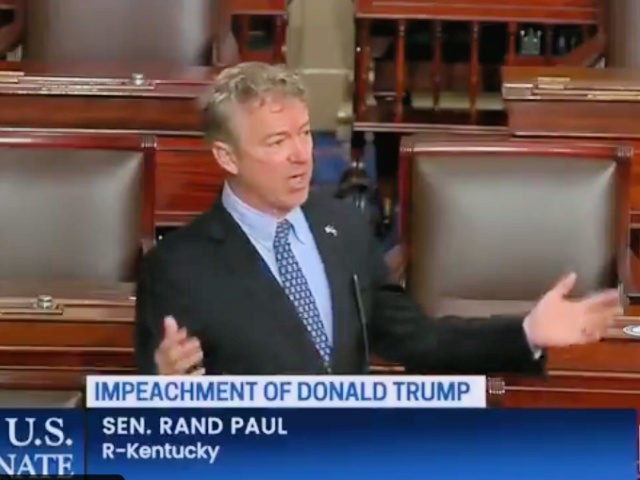 This vote likely serves as a proxy vote on the final vote of whether to convict Trump on the question if he incited an insurrection during the January 6 riots.

Paul wrote on Tuesday that 45 senators agreed that this trial is a “sham:”

“The Senate just voted on my constitutional point of order. 45 Senators agreed that this sham of a “trial” is unconstitutional. That is more than will be needed to acquit and to eventually end this partisan impeachment process. This “trial” is dead on arrival in the Senate,” Paul wrote.

He said before his procedural motion:

This impeachment is nothing more than a partisan exercise designed to further divide the country.

Democrats claim to want to unify the country, but impeaching a former president, a private citizen, is the antithesis of unity.

Democrats brazenly appointing a pro-impeachment Democrat [Senate President Pro Tem Patrick Leahy] to preside over the trial is not fair or impartial, and hardly encourages any kind of unity in our country.

No, “unity” is the opposite of this travesty we are about to witness.

Hyper-partisan Democrats are about to drag our great country down into the gutter of rancor and vitriol the likes of which has never been seen in our nation’s history. Instead of doing the nation’s work, with their new majorities in the House, the Senate, and the executive branch, Democrats are wasting the nation’s time on a partisan vendetta against a man no longer in office.

“A sham, this is a travesty. A dark blot on the history of our country. I urge my colleagues to reconsider this kangaroo court and move forward to debate the great issues of our day,” he added.

We finally hear from the ‘QAnon Shaman’