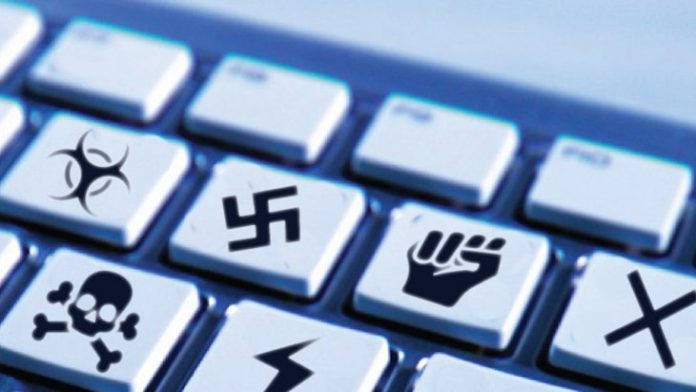 Terrorists and foreign trolls are driving anti-Semitic hate online in the United States and elsewhere, posting negatively about Jews and driving hatred of Jews and Israel.

A new study analyzed 250 million extremist anti-Jewish posts and found that anti-Jewish posts increased sharply during times of political uncertainty and unrest. Much of the anti-Jewish hate that’s being posted on social media seems to originate with domestic terrorists and foreign “trolls” in Russia and elsewhere: anonymous and misleading actors who are deliberately trying to stoke hatred towards Jews and foment divisions within the United States.

Prof. Ari Lightman, an expert in online extremism at Carnegie Mellon University in Pittsburgh, recently spoke with Aish.com about the anti-Semitism that extremists are bringing into American online message boards and conversations – and what we can do to stop it.

He cautioned that it’s often impossible to know the true origin of social media posts and memes. What’s clear from his research, however, is that a plethora of social media users from hate groups, terrorist organizations, and hostile state actors are deliberately concealing their identities and posting anti-Jewish comments and memes, disguised as “ordinary” social media users.

“In my research, a number of Russian fronts are covering for the old school KGB,” continuing that notorious spy agency’s attempts to harm and destabilize Russia’s historically enemies – including the United States. “In order to create a positive image of Russia, they promote anti-American feelings to cause unrest.” The fact that the United States is a strong ally of Israel, and that Americans hold broadly pro-Israel feelings, means that attacking Israel – and by extension Jews – can be seen by America’s enemies as a mode of attack on America itself.

According to Dr. Lightman, it’s not only state-sponsored actors who are attacking Jews and Israel on American social media. “There are a lot of large monetary interests in Russia,” he explains. “There are oligarchs who have oil, shipping, arms contracts…. By stoking anti-Israel sentiment, there’s a possibility that it helps them sell more arms, more oil, more shipping to Middle Eastern countries… You can see how disinformation can benefit Russian political interests and monetary interests within Russia.”

The recent report, by the Network Contagion Research Institute (NCRI) at Rutgers University in New Jersey, found that anti-Jewish and anti-Israel posts draw on age-old canards that Jews have too much power and money and are somehow able to bend others towards their wills. Jews are portrayed as uniquely evil and even as having almost superhuman powers which they use to harm others.

Instead of attacking Jews in general, the Institute found that classic anti-Semitic stereotypes are applied to prominent Jews, then spread as conspiracy theories about those individual Jews – with the tacit understanding that these vial smears lower people’s opinions about all Jews in general. Two popular targets are the Rothschild banking family and the financier George Soros, who is a prominent donor to liberal causes. The NCRI found a clear correlation between the online hate that’s directed towards these prominent Jews and real-world attacks against Jews and Jewish interests.

Take George Soros. The Institute found that most attacks against Soros accuse him of being a globalist. He’s routinely accused of subverting “domestic sovereignty (and giving it) over to an international order while (it’s) being undermined internally by immigration and internationalism.” On a typical day, the NCRI found between 2,000 and 3,000 posts attacking George Soros on the sites it monitors. Many of these are posted in coordinated ways by foreign internet trolls and by domestic American extremists and hate figures.

Yet in the days leading up to the massacre at the Tree of Life Synagogue in Pittsburgh on October 27, 2018, the number of anti-George Soros posts rose dramatically to 14,000 a day. While it’s hard to prove that this was linked to the shooting, much of the rhetoric found online about George Soros seemed to echo the social media posts of the shooter, Robert Bowers.

Bowers explained his actions by saying that he blamed Jews for bringing immigrants into the United States. A few hours before he entered the synagogue and murdered eleven Jewish worshippers, he posted on the social network Gab about the Hebrew Immigrant Aid Society (HIAS), which helps aid (legal) immigrants in the United States: “hias (sic) likes to bring invaders in that kill our people. I can’t sit by and watch my people get slaughtered. Screw our optics, I’m going in.” It was an echo of the anti-Semitic smears against George Soros that were filling the internet, and an uncanny example of online hate stoking real-life murder.

Some of the examples of online Jewish hate bear the hallmarks of sophisticated campaigns meant to demonize Jews and Israel.

In 2020, people searching Google for the phrase “Jewish baby strollers” found sickening images of ovens on wheels. The NCRI was able to track down a series of messages on the popular extremist message board 4chan in which users boasted that they’d succeeded in manipulating Google’s search algorithms to post the images. While it’s impossible to discern the true identities of the people behind this and other malicious anti-Jewish posts, the NCRI found that both Russian trolls and American extremists sometimes coordinate their posts, sharing content and posting anti-Jewish memes and comments at the same time.

Who is behind this massive rise in anti-Semitic posts? Prof. Lightman cautions that there are many actors, and that they carefully conceal their identities when posting negative comments about Jews. Social media posts, cartoons, graphs and charts, memes and other content that we might assume was posted in good faith by ordinary people was often deliberately created in order to frighten us, inflame our passions, and stoke hate.

It’s “the usual suspects,” who are fomenting anti-Jewish hatred online, Prof. Lightman notes. “The KKK, any of the white supremacist groups, the Proud Boys… Also folks who you might not believe are directly in league with these white supremacist organizations.” These might be anti-Immigrant groups or anti-Israel interests, or even racial justice campaigners who oppose Israeli occupation of Judea and Samaria, the regions known as the West Bank of the Jordan River. These extremists “don’t really care about the collateral damage to an entire ethnic group” that hateful posts might engender, Prof. Lightman explains.

Prof. Lightman warns that online hate speech is increasing at an accelerating rate. “Misinformation is being designed to be subjective and misconstrued: it’s designed to deceive the public.” Alarmingly, extremist social media posts are proliferating even in mainstream social media sites – and our own behavior is making us vulnerable to being deceived.

One problem is the emergence of what academics studying online extremism call echo chambers: these are structural ways that social media sites allow us to keep out other people who might have different views from our own. “If we become friends on Facebook,” Prof. Lightman explains, “and we share a lot of beliefs, we might exclude others (from our online friend group). This reinforces each other’s beliefs to the exclusion of others.” Surrounding ourselves only with opinions that agree with ours online makes us uniquely vulnerable to believing ever more extreme variations of our existing political tenets.

Another problem emerging in social media is the existence of “filter bubbles” that are built into social media sites. Based on our behavior online – what we watch, comment on, click on or “like” – social media sites’ algorithms will feed us similar content. In time, this content can become ever more extreme.

In May 2020 the Wall Street Journal uncovered an internal study that Facebook commissioned – then buried – that showed the site’s algorithms was indeed feeding users ever more extreme content, effectively radicalizing them.

The NCRI report found a worrying increase of extremist anti-Jewish posts on ostensibly mainstream online sites. While extremist posts might originate and proliferate on marginal social media sites that are known for fostering hateful dialogue, these posts and the ideas behind them can migrate for more mainstream discourse online. Newly popular sites like TikTok and Parler have seen particularly high levels of anti-Semitic posts, Prof. Lightman notes.

A key condition for that to happen is stress. Periods of civic unrest and transitions of power render people vulnerable to succumbing to online hate. The NCRI found that “anti-Jewish disinformation by conspiracy groups…peaked on Twitter at the onset of the Floyd social justice protests in May 2020, and remains higher now than it was before the coronavirus pandemic.” One day during the George Floyd protests, the NCRI documented 500,000 Tweets concerning George Soros in one day.

As we all endure the uncertainty of the pandemic, political unrest, and changes in political leadership, the conditions for higher levels of anti-Jewish hatred remain ripe. “We’re all targets for misinformation,” explains Prof. Lightman, “especially when we’re under duress – and we’ve all been under duress for ten months.” He calls misinformation the second pandemic that we’re all currently living through, and being grievously harmed by.

In the face of such coordinated anti-Jewish attacks – and the conditions that help people be more open to believe them – what can we as individuals do to stop online hatred for Jews and Israel and for other marginalized groups?

“We have to be incredibly skeptical and diligent in association with the information we get,” Prof. Lightman cautions. Keep in mind that seemingly authentic sources of information might be completely fabricated. Studies can be biased, graphs that we see online might be wrong, and posts that seem as if they originated with a real-world person might have been written by a terrorist, or by a neo-Nazi, or by a person who’s being paid by a foreign government to impersonate Americans and write hateful posts. “Think like a journalist,” Prof. Lightman urges. Don’t be quick to believe what you read online.

Elderly people and teenagers are particularly vulnerable to misinformation, he notes, and are often targeted on social media. “We have to be skeptical of all the information we consume online.” This is a lesson that’s crucial to teach to our kids, who often engage in social media sites where misinformation and hateful posts are rife.

It’s an uphill battle. Most of us are consumers of social media and are exposed to the misinformation and anti-Semitism that fills our screens. We each have an obligation to do what we can to educate ourselves, to speak out when we see incorrect or hateful posts, and to limit our own social media consumption.

In a world with so much hatred and division, perhaps turning away from our computers and phones and making an effort to engage with people in the real world instead is a good place to start. (Aish.com)