FDNY Truck Plows In To “Coquette Kids” Store in Bklyn; Owner Vows to Rebuild for Customers - The Jewish Voice

FDNY Truck Plows In To “Coquette Kids” Store in Bklyn; Owner Vows to Rebuild for Customers 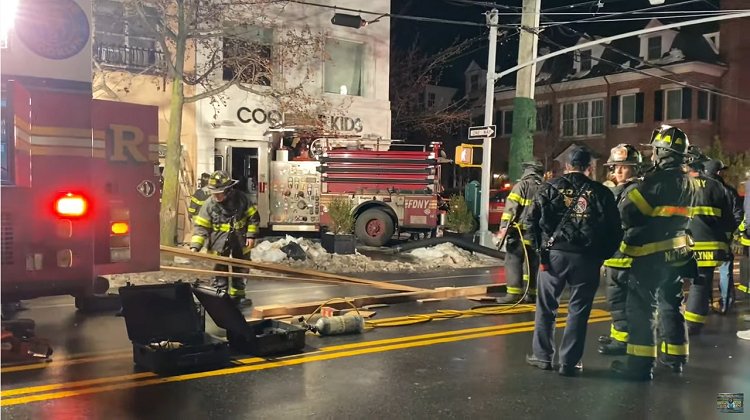 The deafening sound of fire and ambulance sirens punctuated the still night air on Sunday, December 20th in the serene Brooklyn neighborhood of Gravesend .  A freak & sudden accident brought devastation to a beloved community store and its esteemed owner.

As was reported by published sources, at approximately 11:30 pm on Sunday night, a fire engine was on its way to respond to a fire at 8750 Bay Parkway when the accident occurred on Avenue U. Reports indicated that the FDNY truck collided with a Mercedes. It was then that the truck veered up over the sidewalk and hit the storefront of the Coquette Kids children’s clothing shop on Avenue U and East 4th Street, according to police. According to the FDNY, the driver of the Mercedes and six firefighters sustained minor injuries in the accident.

The injured firefighters were treated at NYU Langone Hospital – Brooklyn while the driver of the car was taken to New York-Presbyterian Methodist Hospital, according to a Daily News report.  All have been released.

The Daily News reported that the storefront was reduced to a pile of twisted metal and debris. Five people who live above the store were evacuated over concerns the building now may be structurally unsound. 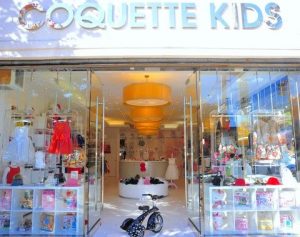 In an interview with the Jewish Voice, Coquette Kids store owner, Bunny Benhooren said that she first learned about the accident upon receiving calls from concerned neighbors. “When the neighbors called and told me what happened, I was totally shocked. When I got down to the store and actually saw the utter devastation, it did not seem real to me. It was like a scene from a movie.”

She added that, “even though I was naturally shocked and extremely upset, I was also very grateful to G-d that this did not happen during the day when the block is filled with people shopping. As long as no one got hurt, then with G-d’s help, we can rebuild and replace what we lost.”

On that note, Mrs. Benhooren said that a great deal of her inventory which is normally replete with high end children’s fashion from Italy and across Europe was crushed by the enormous impact of the fire truck.

Having been in operation for 30 years, Mrs. Benhooren is not only a cherished and highly respected community member but is an entrepreneur that everyone loves doing business with. The Daily News reported that Shuli Ankari, 37, who owns Breeze Swimwear across the street from Coquette Kids said, “I love Bunny. I’ve always shopped in her store for my nieces. She has the best baby stuff and she’s a lovely person.”

The FDNY truck not only destroyed the metal security gate in front of the store but the full length glass windows as well as the store’s sign.  The truck also demolished the wall of “Creative Trophies,” the shop next-door to Coquette Kids, according to the Daily News report. The owner of the shop, Joey Minuto, 65, said the business has been in his family for 59 years, and the two stores share a wall.

In terms of what steps to take in the immediate future, Minuto said, “there’s a lot involved, but the first thing is to get the whole wall rebuilt.” The Daily News reported that Minuto initially heard the news of the accident from the tenant living above his store.  “He said, “Joey, there’s a Fire Department truck in the corner store,” Minuto recalled. “I said, ‘What, are you drunk?’ ”

Firefighters also used a ladder to get to the window of the apartment above Minuto’s store to help evacuate residents who were unable to exit the building because of the massive amount of debris in the hallway.

The report indicated that customers passing by were also devastated to see the damage, mourning one of their favorite spots to shop.

Currently, electricity, gas and water in the building has been shut as inspectors investigate for any signs of possible structural damage.

Mrs. Benhooren said, “my store, Coquette Kids, has been an integral part of the neighborhood for decades. My customers and I are like family in so many ways. We are loyal to one another and I sell to and trust not only my customers but their kids, grandkids and great grandkids.”

She added that, “This year has been incredibly tough due to the coronavirus and we were forced to shut our doors several times this year. And now it is holiday season and we were entering a new and more hopeful phase in terms of business; and then this happened.”

Mrs. Benhooren explained that what helped keep Coquette Kids stay afloat from a business perspective during the lockdowns due to the coronavirus was that she, “shipped clothing to customers, conducted curbside business transactions and let my customers know that I was there for them in every way during this crisis.”

According to customers, what makes the children’s fashions unique at Coquette Kids is that they carry “absolutely exquisite clothing for kids, from dressy to casual.”  One customer remarked that, “the clothes that this store carries are from Italian designers. I happen to know that Bunny travels the world  looking for unique and different clothes for her customers and everything that Coquette stocks is just beyond gorgeous.”

“The very good news is that despite this catastrophe, I will not be letting my customers down, “ said Mrs. Benhooren. “Right now, I am making plans to relocate the store and keep it in the neighborhood, so that my customers will find it accessible and convenient. There is something very special being located in a lovely residential area like Gravesend and I would love to keep it that way.”