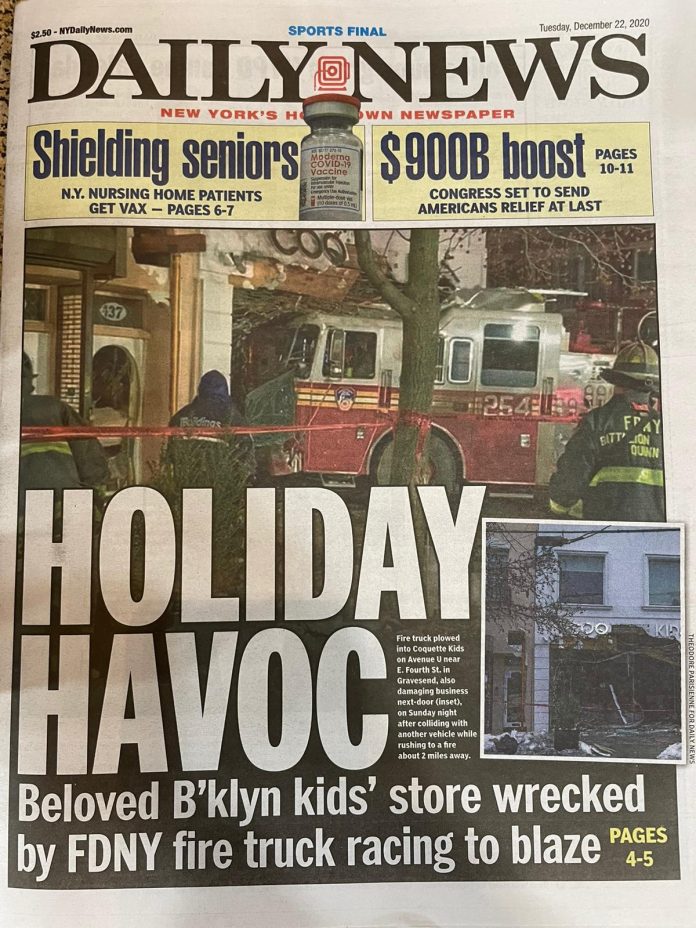 When residents of the tightly-knit community in the Gravesend section of Brooklyn, woke up on Monday morning to hear the news of the shocking accident that took place at the ‘Coquette Kids’ children’s clothing store on Avenue U the night before, no one could go about their lives as usual.

On Sunday night at approximately 11:30 pm on Sunday night, a fire engine was on its way to respond to a fire at 8750 Bay Parkway when the accident occurred on Avenue U. Reports indicated that the FDNY truck collided with a Mercedes. It was then that the truck veered up over the sidewalk and crashed into the storefront of the Coquette Kids children’s clothing shop on Avenue U and East 4th Street, according to police. The Daily News reported that the storefront was reduced to a pile of twisted metal and debris. According to the FDNY, the driver of the Mercedes and six firefighters sustained minor injuries in the accident.

As the local New York newspapers covered this freak and sudden accident with a palpable level of gravitas, horrified residents immediately rallied around Mrs. Bunny Benhooren, the esteemed owner of the beloved “Coquette Kids’ store.

Said one local resident and friend and Mrs. Benhooren, “When we heard about this tragic accident, we felt that all our lives had changed in a one split second.  We all felt that our own businesses had sustained major damage because what happens to one of us directly affects all of us.”

She added that, “I have known Bunny for so many years and everyone in this community not only holds her in the highest regard but she is like family to us. She is really a one-of-a-kind, absolutely lovely person, as well as a scrupulously honest business person and someone who cares deeply about her customers and just about everyone in this community. She is true friend in every respect.”

In a phone interview with the Jewish Voice on Thursday, Mrs. Benhooren was simply overwhelmed and exceptionally grateful for the outpouring of love and support she has received from the community members that she calls “family.”

“People have been contacting non-stop since the accident on social media, through e-mails, texts and literally hundreds of phone calls, “ she said with great emotion reverberating in her voice.

She said that people have told her that they are completely devastated at the colossal level of damage that her store experienced and have been offering her help in any way possible.

“One community member told me that her daughter was completely broken up about what happened and when she passed the store she began to cry,” said Mrs. Benhooren.

Others have offered to help promote her exquisite line of designer children’s haute couture and others have offered empty stores that she could use until she completes the rebuilding of her current location on the corner of Avenue U and East 4th Street.

“My customers are the most loyal in the world and for that and much, much more, I am so incredibly appreciative, “ said Mrs. Benhooren.

She said that people not only want to continue buying her unique merchandise but they want to pitch in to spread the word about the line of clothing that she sells.

“Right now, as we speak, we are shipping huge amounts of items all across the country. People are contacting me not only from this special community in Brooklyn, but from Deal, New Jersey, Miami, Florida and many cities throughout these great United States. I have also received calls and texts from people in Europe and Israel, “ she said.

She added that, “This year has been incredibly tough due to the coronavirus and we were forced to shut our doors several times this year. And now it is holiday season and we were entering a new and more hopeful phase in terms of business; and then this happened.”

Mrs. Benhooren also said, “As I mentioned the other day,  I was also very grateful to G-d that this did not happen during the day when the block is filled with people shopping. As long as no one got hurt, then with G-d’s help, we can rebuild and replace what we lost.”

She expressed her heartfelt thanks and appreciation to her customers, beloved friends and community members by saying, “I am deeply humbled by the great sincerity of those who have expressed their grief and for their unflinching offers to help me rebuild Coquette Kids. My store will be built because it is an integral part of this community and that was shown to me this week. I will work in unison with those who have offered help and together we will rebuild and thrive in ways we never thought possible.”