As  “The Great Reset” continues to trend on  Twitter, the NY Times published an article declaring it to be “A baseless conspiracy theory about the coronavirus.”

Ironically, this article came out just hours before The World Economic Forum held a Zoom Conference on…. you guessed it: The Great Reset 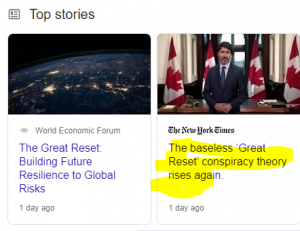 The NY Times actually had a panelist at a World Economic Forum Zoom conference on The Great Reset, yet the NY Times Davey Alba writes:

On Monday morning, the phrase “The Great Reset” trended with nearly 80,000 tweets, with most of the posts coming from familiar far-right internet personalities. The conspiracy alleges that a cabal of elites has long planned for the pandemic so that they could use it to impose their global economic control on the masses.

Now first off, the World Economic Forum is exactly what Alba writes, a cabal (if you will) of powerful elites. The WEF hosts an annual meeting at the end of January in Davos, a mountain resort in Graubünden, in the eastern Alps region of Switzerland. The meeting brings together some 3,000 business leaders, international political leaders, economists, celebrities, and journalists for up to five days to discuss global issues, across 500 sessions.

Second, in general, people are not comfortable with the fate of the entire world being sculpted by a handful of political and business leaders, so it would seem logical that writers, activists, and others question the WEF.

Alba is turning this into a political issue and claiming “far-right” internet personalities are the only ones concerned with this issue. This is not true, every time the meetings are held in Davos, huge protests emerge which include people from all political stripes, including socialists and environmentalists.

People are suspicious, people question and people are skeptical. Perfectly acceptable in a society that is made up of individuals who all have different concerns.

Not according to the NY Times which continues;

The narrative first took root in late May, when Prince Charles and Klaus Schwab, the executive chairman of the World Economic Forum, announced plans to convene world leaders and discuss climate change and how to rebuild an economy damaged by the pandemic. The meeting was branded as a “Great Reset,” and the false rumors about the tight-knit group of elites manipulating the global economy took off.

In other words, yes the meetings are real, and yes it’s called The Great Reset; but it’s a conspiracy because individuals are mentioning this and writing about it, and talking about it and questioning it.  Unacceptable!! Only established media such as the NY Times can dictate to you, what one can discuss.

If it was not for “conspiracy theorists” independent media outlets and activists, the average person would even know The World Economic Forum even exists.

It would appear the NY Times by publishing this disinfo is “running cover” for the WEF and The Great Reset in general.

Alba seems most upset that it trended on Twitter:

Soon, far-right internet commentators with records of spreading misinformation posted about the conspiracy, collecting tens of thousands of likes and shares on Facebook and Twitter. The posters included Paul Joseph Watson, a former contributor to Infowars

The message the NY Times is conveying is simple, don’t think about The Great Reset, don’t write about it on Twitter, and don’t read anything about it, because we are telling you it’s a “conspiracy theory”

It seems that Alba and the NY Times tried to looby Twitter and Facebook to make The Great Reset vanish from the lexicon itself, the Times concluded;

Twitter said the tweets about the conspiracy did not violate its rules, and that “The Great Reset” was no longer trending. Facebook did not immediately respond to requests for comment.

Suffice to say, if the NY  Times is telling you to pay no attention to the WEF and The Great Reset, you should continue to learn more about these powerful influencers of the world