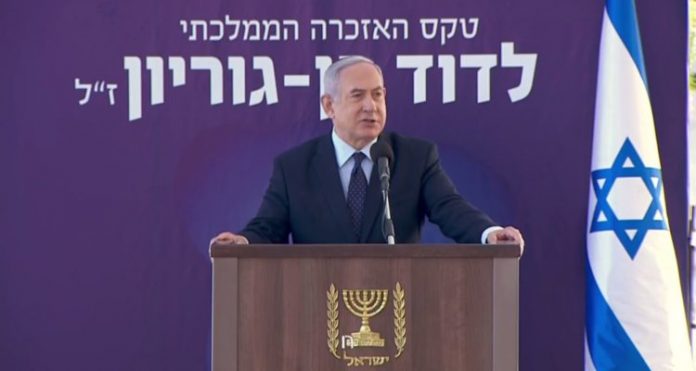 “There can be no going back to the previous nuclear agreement. We must stick to an uncompromising policy of ensuring that Iran will not develop nuclear weapons,” Netanyahu said during a speech at the annual memorial ceremony for Israel’s founding prime minister, David Ben-Gurion.

“Thanks to our determined stand against the nuclearization of Iran, and to our opposition to the nuclear agreement with Iran, many Arab countries have fundamentally changed their approach to Israel,” Netanyahu said, pointing to the recent peace agreements brokered by Trump through which the United Arab Emirates, Bahrain and Sudan all decided to normalize relations with Israel.

The Prime Minister implicitly addressed Biden, demanding he not change the American attitude toward the Tehran leadership and the nuclear deal that President Trump pulled out of in 2018, saying that “uncompromising policies must be adhered to, to ensure that Iran does not develop nuclear weapons.”

Biden is expected to try and bring America back into the 2015 Iran nuclear deal signed when he was vice president. That agreement severely curtailed Iran’s nuclear program, but after 15 years would allow Iran to resume its activities without limits. Israel and Arab states neighboring Iran had objected to the deal that was pushed through by the Obama administration.

The IDF and the Mossad are preparing for a possible resumption of negotiations between the United States and Iran, Channel 13 News reported. Both security bodies are drawing up plans for cooperation with the Americans in order to achieve an improved nuclear agreement. Israel supported increased pressure on Iran through covert operations and additional economic sanctions, and it is estimated that Iran will refrain from a military response against Israel as long as Trump is in office, the report said.

Last week, the International Atomic Energy Agency (IAEA), the UN’s nuclear watchdog agency, announced that Iran was continuing to violate its nuclear deal. The agency reported that Iran had produced 2,442.9 kg of low-grade enriched uranium, far beyond the 202.8 kg it is allwoed.

Also last week, the New York Times reported that Trump asked about the possibility of attacking Iran’s nuclear facilities, but his top advisers, including Vice President Mike Pence and Secretary of State Mike Pompeo, reportedly dissuaded Trump from the move, arguing that such an attack would lead to a large-scale regional escalation.