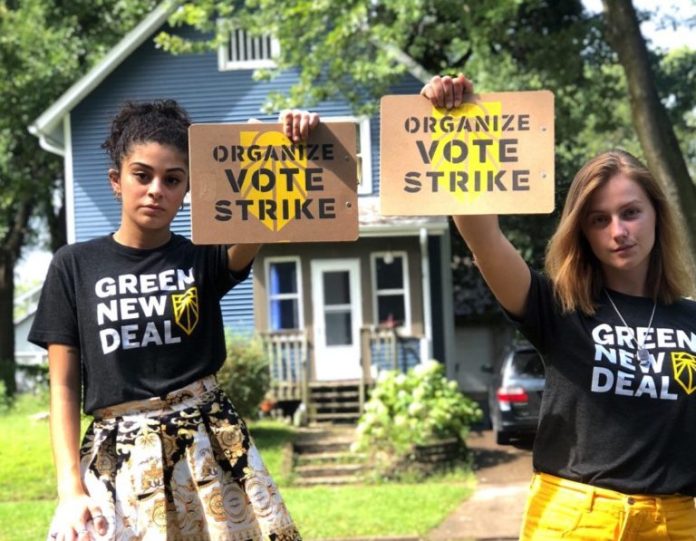 The Sunrise Movement was created by a former director of the globalist organization The Sierra Club and other top liberal activists in 2017.

The Sierra Club is also heavily backed by liberal billionaire donor George Soros via his network Democracy Alliance.(LINK TO THE RESEARCH)

The movement pushing Americans to refuse the results of the upcoming election has been plotted for months.

The information was made public by a member of the group who hopes to warn Americans of the far-left mobilization movement.

After allegedly handing the information over to law enforcement, the leaker posted photos and videos to two websites, SunriseExposed.com and ExposeSunrise.com.

In the meetings, members discussed shutting down the White House, other federal buildings, public transportation hubs, and more.

In the video with federal workers, they talk about taking over the government from within via their government jobs. They discuss leaking information to the media

One woman celebrated a Harry S. Truman quote where he complained bureaucrats tied his hands as president, saying, “We, as federal workers have power.”

Speaking about the leftist groups, “Shut Down DC,” “Choose Democracy,” “Hold The Line,” and others, one woman said, “They’re the ones who are really in the vanguard of helping people think about different actions that can be taken well beyond street protests.”

In a leaked Zoom call between members of “Shut Down DC,” an individual was caught saying, “We have been in discussion for a couple of months about how to respond to different contested election scenarios.”

Youtube has removed this second zoom video with Shut Down DC but the expose sunshine group translated the discussion:

“The first step is we think we need to start the post-election phase in the streets, so we invite everyone to come to BLM (Black Lives Matter) Plaza any time after 4:00 on election night,” the left-wing activist continued. “On the 5th, we’re going to shut down the White House. On the 6th, we’re going to shut down larger parts of D.C., and then the following week, all the mainstream groups are going to come to D.C. and try to have a march on the 7th.”

On the same Zoom call, far-left organizer Lisa Fithian asked her co-conspirators, “Is there going to be a war? Are people going to get killed? Like, is that on anybody else’s mind? I’m guessing it is. We’re gonna see potential fighting all over the county or in some hotspots.”

“Whoever’s got the guns can win – let’s take over the buildings!” she added. “We are going to be in a crisis but we want it to be one that we are creating. We want to make sure that we are on the offense and not the defense. We want them to be responding to us and not us responding to them.”