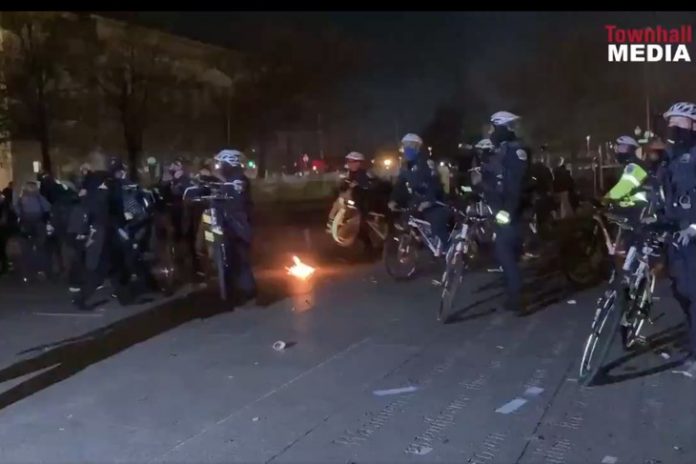 AP reported: After several thousand supporters of President Donald Trump protested the election results and marched to the Supreme Court, nighttime clashes with counterdemonstrators led to fistfights, at least one stabbing and more than 20 arrests.

From most accounts from reporters on the ground and from DC police, the crowd was estimated at around 200,000 people, other reports indicate even larger crowds

While the pro-Trump crowd was peaceful and there to exercise their first amendment and voice their displeasure with the alleged voter fraud reports which have emerged out of almost every swing state in the election, on the edges of the gigantic protest were the blac block, insurrectionists of ANTIFA, BLM and similar leftist groups, there to not only counter-protest but to provoke the MAGA masses

AP continued: The demonstrations in the nation’s capital went from tense to violent during the night and early Sunday. Videos posted on social media showed fights, projectiles and clubs as Trump backers sparred with those demanding they take their MAGA hats and banners and leave. Police said they made 21 arrests on a variety of charges, including assault and weapons possession, and recovered eight firearms. Four officers were injured. No arrest has been made in the stabbing, and the victim was hospitalized with non-life-threatening injuries.

The “Million MAGA March” was heavily promoted on social media, raising concerns that it could spark conflict with anti-Trump demonstrators, who have gathered near the White House in Black Lives Matter Plaza for weeks.

The media has covered the  MAGA rally by heavily focusing on the fact that Proud Boys attended and one of the speakers was a Georgia Republican newly elected to the U.S. House. Marjorie Taylor Greene, who has expressed belief in some qanon conspiracy theories, while ignoring that the violence was provoked by radical leftists who attempted to harass the protestors and infringe on their 1st amendment rights. After months of destructive and violent left-wing protests in the wake of the George Floyd killings;  conservatives, flag wavers, and Trump supporters are endlessly maligned.

Below are some of the violent scenes that emerged after left-wing protesters ruined a peaceful free speech event.

DC: Antifa and BLM physically assault a Trump Supporter by macing him and beating him over the head with a flag pole pic.twitter.com/FG63zpe7Tl

Graphic: A close-up angle of BLM rioters knocking a man unconscious who was leaving the #MillionMAGAMarch in DC earlier today. They also steal his phone when he’s on the ground. Video by @FromKalen. pic.twitter.com/cf7bnkpsCf

Current scene on 14th and Pennsylvania.

ANTIFA is walking the streets looking for Trump supporters to attack and terrorize.

They have thrown fireworks into restaurants and now destroyed a Trump stand. pic.twitter.com/W3vn0S2Rbx

At BLM plaza where Trump supporters are being ran out by BLM and ANTIFA members.

Right before I started rolling they grabbed this woman’s hair and stole her American flag.

Trump supporters are either being escorted out by police or attacked by a mob pic.twitter.com/WObSZ44lQW

DC Police blocked off BLM again so Trump supporters couldn’t get through and were made to go through BLM group which then attacked them. #MillionMAGAMarch pic.twitter.com/tS7YTEe51X

We cannot co-exist with these lunatics. pic.twitter.com/IyetnbOWue

Where are the Proud Boys or any group of protectors at this point? pic.twitter.com/r0ZUPkL4mN

All out brawl between Proud Boys and Antifa in the streets of DC. pic.twitter.com/dIp1aNfyGV

Happening at the Hilton in DC. They’re just so angry all the time!! pic.twitter.com/ss0Vgaj8S1

Open violence, projectiles being thrown, batons and sticks being used in a full melee down here. pic.twitter.com/iq8ZjgH5Cd