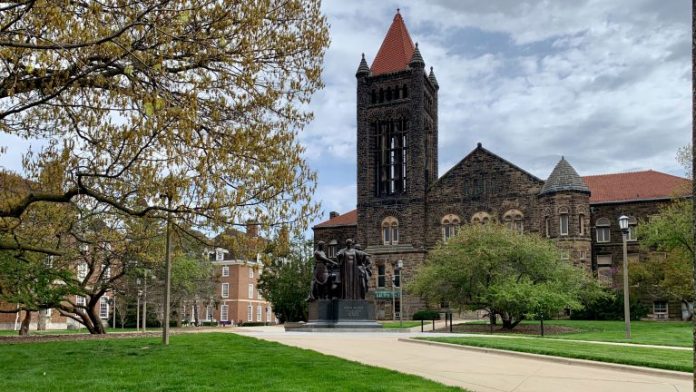 The Department of Education’s Office for Civil Rights (OCR) announced it has opened a formal investigation into a complaint alleging Jewish students at the University of Illinois at Urbana-Champaign (UIUC) have faced an unrelenting campaign of anti-Semitic harassment.  OCR evaluates all complaints it receives, but it only pursues investigations in those it determines warrant a more thorough examination.

The complaint OCR will investigate was submitted on behalf of UIUC’s Jewish students and alleges that UIUC has allowed a hostile environment to proliferate on its campus in violation of Title VI of the Civil Rights Act of 1964. It was prepared by Arnold & Porter Kaye Scholer LLP together with the Louis D. Brandeis Center for Human Rights Under Law, in consultation with the Jewish United Fund and Hillel International.

“All Jewish college students deserve the right to learn and live in a safe, welcoming environment, free of anti-Semitism and anti-Israel harassment,” said Mark Rotenberg, vice president for University Initiatives and Legal Affairs at Hillel International. “As we continue to work collaboratively with our colleagues at the University of Illinois at Urbana-Champaign to address the problem of anti-Semitism on campus, we appreciate this step taken by OCR to ensure that the rights of our students to a campus free of harassment and discrimination are protected.”

“Jewish and pro-Israel students at UIUC have been subjected to anti-Semitic and anti-Zionist harassment for far too long. We are very appreciative of OCR’s careful review of the complaint and correct determination of the necessity of a thorough and comprehensive investigation. This significant and critical development reaffirms the seriousness of the harassment and discrimination Jewish students face on a regular basis, and the importance of ongoing action by the university,” said Alyza D. Lewin, President of the Louis D. Brandeis Center for Human Rights Under Law. “We are pleased to have begun recent work with the University. At the same time, there is much work to be done, and that is why OCR’s involvement and expertise is vital. We look forward to working with UIUC to implement the important, initial steps it has agreed to, and to cooperating with the Department of Education’s investigation to ensure the best outcome for the University of Illinois community. Both tracks are critical to help achieve a discrimination-free academic setting for Jewish students.”

In response to recent OCR investigations, numerous universities, including Williams College, the University of North Carolina, Duke University and NYU, have agreed to implement steps to combat rising anti-Semitic harassment and discrimination threatening Jewish students on their campuses.

Yesterday, the University of Illinois, in coordination with a number of Jewish groups, announced preliminary steps to address the anti-Semitism described in the complaint.  The university issued a statement with the Jewish groups condemning anti-Semitism, acknowledging the severity of the problems at UIUC, and recognizing the importance of Zionism to Jewish identity. The university also pledged to work with the Jewish community to implement concrete remedies.  The Jewish groups noted that the “statement and the commitment it demonstrates is important, however it is only a first step” and they “look forward to ongoing collaborative work with the Chancellor and his team to convert the objectives…into action.”

“While we commend the Chancellors office and the University for the steps they are taking, we know this is a first step, and there is lot of work still to be done. With OCR opening an investigation, we hope that both of these actions, working simultaneously, will create a campus where Jewish students and all students can feel safe and at home,” stated Rabbi Dovid Tiechtel, University of Illinois Chabad Center for Jewish Life.

The OCR complaint outlines how Jewish and pro-Israel UIUC students have been subjected to an alarming increase in incidents of anti-Semitism and anti-Zionism over the past five years.  It details how numerous swastikas have been found on UIUC’s campus, Jewish ritual items such as menorahs and mezuzahs have been vandalized, and windows of Jewish fraternity houses have been smashed by bricks.  It also describes how members and supporters of Students for Justice in Palestine at UIUC publicly glorify members of U.S. government-designated terrorist organizations, harass UIUC Jewish and pro-Israel students with epithets like “Nazi” and “white supremacist,” and advocate the expulsion of Zionists from campus. In some instances, as described in the complaint, UIUC employees have been complicit in fostering a hostile environment.

The complaint also makes clear that UIUC can comply with Title VI—and protect those who are the victims of anti-Semitism and anti-Zionism on its campus—without running afoul of the First Amendment to the U.S. Constitution.

“Some will attempt to excuse the bullying of Jewish and pro-Israel students as free speech against an unpopular political opinion, however that is a false and misleading narrative.  Jewish students’ expression of support for the Jewish homeland grows out of their ethnic identity as Jews,” added Lewin. “Jewish students at UIUC and elsewhere are being marginalized, ostracized, bullied and harassed if they won’t publicly disavow their ancestral and ethnic heritage. They are being told that they must abandon their love of Israel to hold office, to join committees, or just to be accepted as worthy. That is textbook discrimination, and it must stop.”

The UIUC students on whose behalf the complaint was filed are legally represented by Baruch Weiss and Avishai D. Don of Arnold & Porter Kaye Scholer LLP.