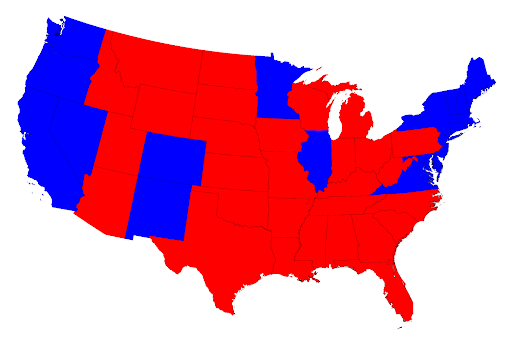 President Donald Trump is poised to win re-election in an Electoral College landslide, according to a poll released on Sunday.

The Democracy Institute/Sunday Express poll of 1,500 likely voters was conducted between October 28 and October 30 and shows Trump with a one point lead over Democratic candidate Joe Biden in the national popular vote, 48 percent to 47 percent.  Libertarian candidate Jo Jorgensen receives two percent of the vote, and Green Party candidate Howie Hawkins receives one percent of the vote.

The national popular vote results are within the poll’s 2.5 percent margin of error.

The poll shows President Trump with record levels of support among Black and Hispanic voters.

The Democracy Institute/Sunday Express poll is one of several that address the issue of the “shy Trump voter,” a voter who will vote for President Trump but is reluctant to share his preference with family members or polling firms.

The approach used to identify “shy Trump voters” among undecided is to ask three “permission” questions, the results of which are included below:

The results of the Democracy Institute/Sunday Express poll stand in contrast to the Real Clear Politics Average of Polls, which currently shows Joe Biden with a 7.6 point lead over President Trump in the national popular vote, and with a 216 to 125 lead in the Electoral College, with 197 toss ups.

The Democracy Institute/Sunday Express poll is one of the few national polls to ask respondents their views on the burgeoning Biden family corruption scandal, and the results appear to be devastating for Joe Biden’s presidential campaign.

When asked, “Who do you believe is telling the truth about alleged Biden family corruption?” 57 percent of poll respondents said Tony Bobulinski while only 43 percent said Joe Biden.

As Breitbart News reported, Bobulinski is the former Biden family business associate who has provided swaths of documentary evidence to the media and FBI that support his statement that he met personally on two occasions in 2017 with Joe Biden to discuss a business deal involving Hunter Biden and a Chinese company:

“I have heard Joe Biden say he’s never discussed the business with Hunter — that is false,” [Bobulinksi]  continued. “I have firsthand knowledge about this because I directly dealt with the Biden family, including Joe Biden.”

He explained that “Sinohawk” was named “Sino” for the Chinese side and “hawk” in honor of the late Beau Biden, Joe Biden’s other son, whose favorite animal was a hawk.

He also said that $5 million that was to have been invested by the Chinese into the company was instead placed in an account controlled by Hunter Biden. He said that he had not known that until the publication in September of a Senate Homeland Security Committee report by Sen. Ron Johnson (R-WI), which described how the $5 million had been siphoned off by Hunter Biden as “consulting fees.”

When asked,  “Is Joe Biden a corrupt politician?,” a majority of respondents–52 percent–said yes, while 44 percent said no.

When asked, “In light of alleged Biden family corruption, do you consider Joe Biden a national security threat?,” 54 percent of respondents said yes, while 46 percent said no.

“The Republican’s vote is a very efficient one, as it was in 2016. This is the president’s Trump card,” Democracy Institute Executive Director Patrick Basham told the Sunday Express:

Trump’s voters are more evenly dispersed across the country than are Biden’s.

Biden’s comparatively inefficient vote is likely to mirror Hillary Clinton’s from four years ago. Biden will do incredibly well in the heavily populated states of California, Illinois, New Jersey, and New York. In these states, and in others reliably painted a deep Democratic blue, he will rack up enormous margins of victory over Trump, providing him with the potential to score a national popular vote victory, yet probably depriving him of sufficient votes in Iowa, Pennsylvania, Michigan, Ohio, Wisconsin, Arizona, North Carolina, and Florida to turn Trump into a one-term president.

Sunday’s release represents the final installment of the Democracy Institute/Sunday Express polls on the 2020 presidential race.

As Breitbart News reported, their July poll showed the race tied between Trump and Biden. Their October poll showed Trump with a one-point lead over Biden.