When the counting stopped late in the evening after Midnight, President Trump was leading in swing states, PA, WI, NC, GA, and MI.

As of this afternoon, Trump has seen his leads vanish in every swing state except GA, NC, and PA. These would not be enough to secure a victory.   Nevada is extremely close and if Trump pulled out Nevada and holds  PA, NC, and GA, he would pass the 270 threshold at 271 with Nevada’s 6 electoral votes. The Trump campaign is now calling for a Wisconsin recount where he is trailing by around 20,000.

President Trump’s campaign manager Bill Stepien has issued a statement confirming they will demand a recount in Wisconsin:

“Despite ridiculous public polling used as a voter suppression tactic, Wisconsin has been a razor thin race as we always knew that it would be. There have been reports of irregularities in several Wisconsin counties which raise serious doubts about the validity of the results. The President is well within the threshold to request a recount and we will immediately do so.”

Last night I was leading, often solidly, in many key States, in almost all instances Democrat run & controlled. Then, one by one, they started to magically disappear as surprise ballot dumps were counted. VERY STRANGE, and the “pollsters” got it completely & historically wrong!

Meanwhile, irregularities and strange oddities are popping up and various analysts are pointing these out

President Trump had a sizable lead in Wisconsin and Michigan when suddenly all counting stopped but this morning Biden somehow took the lead.

At one point they updated over 138,000 votes in Michigan, which EVERY single one went to Biden :

Take a look at the screen captures, not a single vote was added to Trump in this early morning update 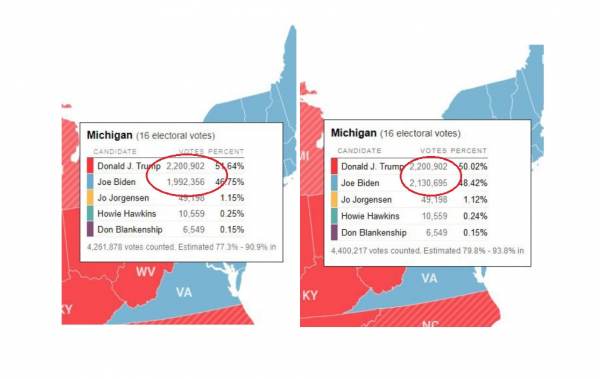 LOL. Biden got a 138,339 tranche of votes in Michigan without a single vote for Trump, in case you were wondering what is happening.

OK. So both Michigan AND Wisconsin have VERTICAL LINES where Biden votes are injected in.

I mean LOOK at this graph for Wisconsin

I’ll zoom in just so you can see the part where Biden votes came out of NOWHERE pic.twitter.com/MPVxTWxjcZ

Gateway Pundit’s source, who is poll watching in Michigan reports:

Last night at TLC (formerly Cobo Hall) where absentee ballots for Wayne County (Detroit) are being counted, a Ferrari, a van and a Chrysler 300 (I think) all pulled up into facility (large garage doors) with ballots inside vehicles. All three of them had out of state plates. This is an ANONYMOUS tip.

Every military ballot has to be duplicated (re-written). I don’t know why. This is very concerning.

Yes. The part about the vehicles.

They’re saying Trump has no chance of winning here. Also, John James does have a chance.

Meanwhile, in Arizona, poll workers reportedly passed out sharpie pens to in-person voters, which has led to worries about invalidated ballots.

They gave Trump voters sharpies and now their votes are being invalidated! WTF! pic.twitter.com/Eb6geKyXZW