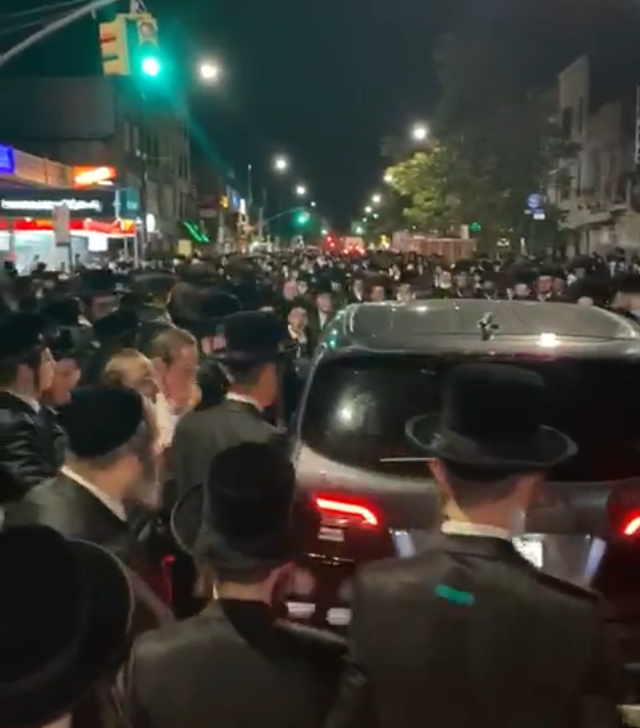 Every year, Shi’ite Muslims in Flushing, Queens, conduct the Arba’een, a procession in honor of Mohammed’s grandson whose death at the hands of a Sunni caliph marked the pivotal break between Shi’ites and Sunnis, slapping their faces and chests for their beheaded Imam Hussein.

Queens, once the borough that gave birth to President Trump and David Horowitz, now has a large Muslim population, and the fall processions of wailing crowds are a regular event.

The coronavirus didn’t change that.

On Oct. 4, a huge knot of Muslim men packed closely together in circles, not wearing masks or with masks down, chanting and furiously beating their chests in memory of Hussein’s martyrdom. Some are shirtless in the traditional fashion. The slaps are meant to be hard enough to cause real pain and there’s plenty of reddened skin on display.

The Shi’ite procession marches down Flushing’s Main Street, past rows of Chinese stores without a police officer in sight. The media also doesn’t stop by to document the event.

It’s one of a number of Shi’ite mass gatherings in New York and New Jersey, including more mourning events for Imam Hussein on Manhattan’s Park Avenue in August, where few of the participants wear masks, and another in Kensington, Brooklyn, around the same time.

Unlike the Orthodox Jewish prayers of the High Holidays and the Sukkot celebrations, these Shi’ite Muslim gatherings were not written up by the New York Post, the New York Daily News, or the New York Times as a public threat. Governor Cuomo and Mayor Bill de Blasio did not blame Muslims for the spread of the virus or declare a crackdown that would close mosques.

The Ashura Jaloos event took place in late August in the Kensington 11218 zip code which is listed on the “orange zone” on De Blasio’s coronavirus watchlist. The Queens procession took place in another watchlist neighborhood where coronavirus rates have been rising.

At the end of August, Governor Cuomo threatened to crack down on Orthodox Jewish weddings and blamed the “Jewish community” and the “Catholic community” for spreading the coronavirus, but made no mention of any action against Muslim events like the one in Manhattan that had taken place a few days before his threats against Orthodox Jews.

A day after the Oct. 4 Queens procession, Cuomo held his infamous anti-Semitic press conference in which he threatened, “I have to say to the Orthodox community tomorrow, ‘If you’re not willing to live with these rules, then I’m going to close the synagogues.’”

To bolster his argument that Chassidic Jews were to blame for the spread of the virus, Cuomo used a photo of a funeral from 2006. Once again, he made no reference to Muslim mass gatherings taking place even right before the release of the new data and his press conference.

The media widely and wrongly claimed that the outbreaks were only taking place in zip codes with large Orthodox Jewish communities. This was false, especially when it came to Queens.

There are plenty of mosques to be found in the targeted zip codes in Brooklyn and Queens, in the red, the orange and the yellow areas on De Blasio’s watchlist. Some are quite large and in the red zone—but Orthodox Jews made a good target. Muslims make a politically incorrect one.

No Democrat would be caught dead threatening Muslims or shutting down mosques.

And the same papers that scold, sneer and mock at men in fur hats would never dream of ridiculing shirtless Muslim men slapping their chests in public. That would be racist.

Like the Black Lives Matter riots and the Sharpton 50,000 rally in Washington, D.C., Islamic religious rituals somehow don’t spread the virus. Not even when they’re taking place in areas on the watchlist. Orthodox Jewish prayers, like Trump rallies, are blamed for spreading it.

The same hypocritical doublethink extended not only to the rituals, but to the reactions.

When a group of Chassidic Jews protested the discriminatory restrictions by Cuomo and de Blasio, by burning masks and waving Trump flags, the media was furious.

Nadler also tweeted a petition of support for Cuomo and De Blasio’s crackdown on Jews from “300 Rabbis” representing something called the New York Jewish Agenda which had been created earlier this year to fight for “social justice.”

The letter was headed by Sharon Kleinbaum of Congregation Beit Simchat Torah, a gay temple, much of whose membership defected when it decided to pray for Hamas terrorists.

“Recent events have demonstrated that CBST is far more committed to a progressive political agenda than to the Jewish people,” wrote Bryan Bridges, a former board member. “I couldn’t imagine raising a child in this congregation, and have that child hear, just before we recite Kaddish, the names of people who are trying to kill her grandparents.”

But, to give Sharon Kleinbaum credit, she doesn’t limit her anti-Semitism to Jews in Israel.

Kleinbaum supported providing space to Queers Against Israeli Apartheid, but is quite happy to see apartheid implemented by her Democrat political allies against Orthodox Jews in America.

The differing treatment meted out to Orthodox Jewish and Shi’ite Muslim religious gatherings is a troubling demonstration of how anti-Semitism is baked into the intersectionality of the left.

It’s not about Israel. And it never was.

Pierre Leroux, who coined the term “socialism,” wrote, “Every government having regard to good morals ought to repress the Jews.” This was a century before the rebirth of the modern State of Israel. It wasn’t Zionism that the founder of socialism was objecting to, but Judaism.

Is it any wonder that Leroux’s socialist successors like de Blasio are taking him at his word?

There is no systemic racism in America. But there’s no question that when you look at the very different treatment for Black Lives Matter rallies, Shi’ite Muslim gatherings and Orthodox Jewish events, that systemic anti-Semitism is alive and well. Especially among New York Democrats.

“My message to the Jewish community, and all communities, is this simple: the time for warnings has passed,” de Blasio had tweeted in April.

There was no such warning for Muslims who, unlike the Chassidic Jews of Brooklyn, were not harassed or threatened in any way. They went on conducting Islamic events with no interference. The New York Post did not spy on their weddings, the New York Daily News did not ridicule their religion, and the mayor and governor did not threaten to come after them.

Cuomo threatened to close synagogues. He did not threaten to close mosques. Nor did he display any pictures of mass Muslim religious gatherings. Instead, he found a photo of a Jewish funeral from 2006 to suggest that Jews were spreading the coronavirus.

Daniel Greenfield, a Shillman Journalism Fellow at the Freedom Center, is an investigative journalist and writer focusing on the radical left and Islamic terrorism.