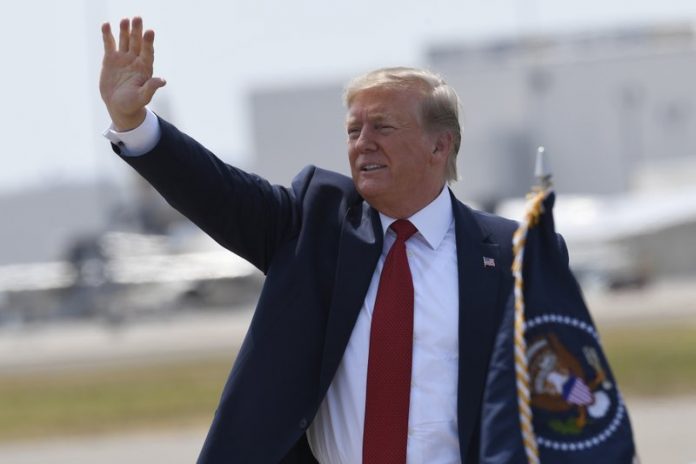 In a first in his political career, President Donald Trump has committed to a “peaceful transition of power,” but not before pointing to the Obama-Biden administration for not living up to that standard, despite no rebuke of it.

“Let me just tell you, they talked about the peaceful transfer, right?” Trump told NBC News’ Savannah Guthrie during his town hall debate in Miami on Thursday night. “They spied on my campaign and they got caught, and they spied heavily on my campaign.

“And they tried to take down a duly elected sitting president and then they talk about, ‘will you accept a peaceful transfer?’ And the answer is, ‘yes, I will,’ but I want it to be an honest election and so does everybody else.”

Trump made a pointed rebuke to debate moderators not asking Joe Biden and Democrats about a peaceful transition of power.

“Savannah, I want it to be clean,” Trump continued. “I really think I’m going to win, but I want this to be clean. It’s sort of ironic that you and them talk about the peaceful transfer when I spent 3½ years fighting off these maniacs and now it turns out, everything’s there, that they were the ones that dealt with Russia and it’s too bad.

“Peaceful transfer, I absolutely want that, but ideally I don’t want a transfer, I want to win.”

Trump, dueling Biden on separate networks in his own town-hall-style debate, was combative at times with host Guthrie, but was also forceful on direct questioning about his pandemic positions, economic recovery, healthcare reform, preexisting conditions, tax returns, and being “under levered” with debt compared to assets with the Trump Organization.

“I am extremely under levered,” Trump declared, adding a vow to reveal the debt the Trump Organization owes in the form of what he called “mortgages.”

“I can tell you this, if they have my tax returns as you know, they have to go to jail,” Trump said. “It’s illegal. The numbers are wrong. Let me tell you what else. I don’t owe money to any sinister people. Russia, Russia, Russia is a hoax. It turned out Hillary Clinton and the Democrats were dealing with Russia, not me.

“You know who I’m negotiating against? Nancy Pelosi, she doesn’t want to give the money,” he continued. “This was not our people’s fault. This was China’s fault and she’s penalizing our people. I’m ready to sign a big, beautiful stimulus. You saw the other day, go big or go home.”

Questioned about his tweeting, including the sharing of conspiracy theories, Trump said retweets do not equal endorsements. Referencing his recent retweet of a baseless conspiracy theory that terrorist leader Osama bin Laden is not dead, Trump said he was not taking a position.

“That was a retweet,” he told Guthrie. “I’ll put it out there, people can decide for themselves. I don’t take a position.”

Earlier in the debate, Trump also refused to denounce the QAnon conspiracy theory, saying he agrees with its adherents’ opposition to pedophilia and cannot be sure if there is a satanic pedophile cult involving prominent Democrats or not