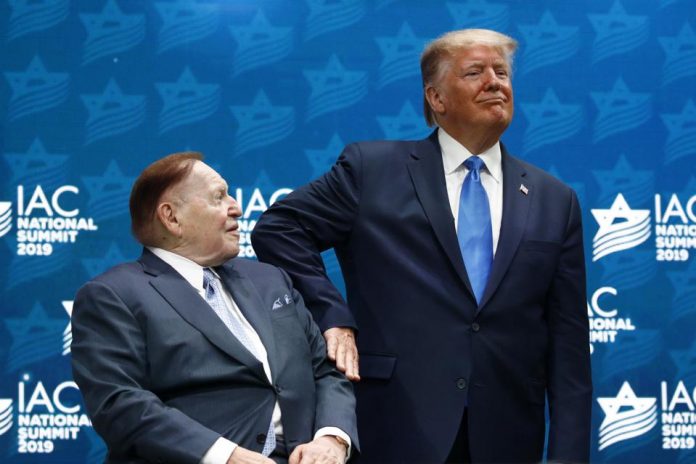 Billionaire casino magnate Sheldon Adelson and his wife Miriam have given $75 million to a new political group that ran ads in battleground states during September that were critical of former Vice President and Democrat nominee Joe Biden.

The donation of Adelson, 87, and his wife, 75, to Preserve America PAC accounted for 90% of the group’s fundraising in September, Politico reported Thursday, quoting a “person familiar with the group’s finances.”

According to Politico, in its upcoming Federal Election Commission filings, Preserve America – which is run by Chris LaCivita, the strategist behind the 2004 Swift Boat Veterans for the Truth campaign that questioned then-Democratic nominee for president John Kerry’s Vietnam War record, will report spending $77 million, with $76 million of it on commercials deriding Biden.

In its short history, Preserve America has become one of the largest-spending independent outside super PACs focused on the presidential race, behind only the Biden-supporting Priorities USA Action and the Trump-backing America First Action, Politico said quoting the Center for Responsive Politics.

The money donated by Sheldon Adelson, who is the CEO of the Las Vegas Sands Corporation and is worth $30.4 billion, according to Forbes, and his wife more than doubles their previous political giving in the 2020 election cycle, Politico said quoting FEC data.

The couple previously had donated $54 million, including $50 million to the Senate Leadership Fund, the GOP super PAC dedicated to the Republicans’ efforts on the upper chamber of Congress.

A major funder of Republican causes, Adelson has donated over $250 million to GOP candidates and groups since 2015.

That includes $1.6 million the Adelsons donated to Trump’s campaign, as well as $10 million they gave to America First Action in 2018, FEC records show.

The Associated Press contributed to this report.