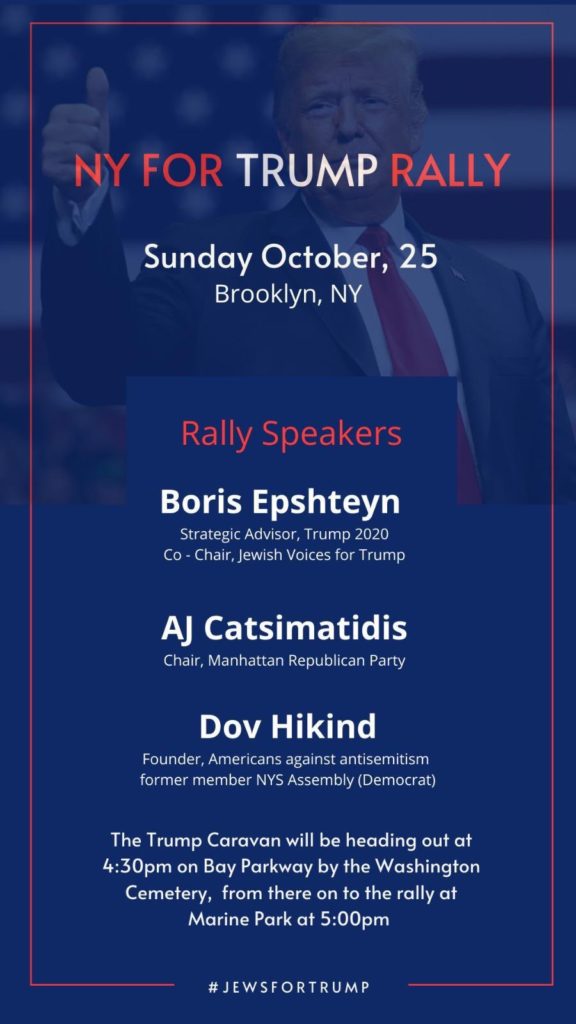 Despite the fact that polls show President Trump trailing his Democratic opponent Joe Biden in the race for the White House and despite the fact that New York is a traditionally blue state that will inevitably go Democratic in the upcoming election, Orthodox Jewish supporters are showing their support for the nation’s 45th president in a series of pro-Trump rallies scheduled for Sunday.

According to a JTA report, “at least four pro-Trump rallies are being organized in Orthodox Jewish communities across the New York area this Sunday.”

As the presidential campaign enters the final full week before election day, Orthodox Jews who support the president are now coming out in droves to help push their candidate over the proverbial finish line in this contentious race.

JTA has reported that there will be major shows of support for Trump in such Orthodox Jewish areas as the Five Towns in Long Island as well as Marine Park in Brooklyn, and in the predominantly Hassidic village of Monsey in Rockland County.

Support for Trump has grown exponentially amongst Orthodox Jews in the New York City area and in the suburbs after weeks of tensions in  Orthodox neighborhoods in Brooklyn over new restrictions imposed on them due to rising COVID-19 cases. Their yeshivas and businesses were ordered closed by order of New York State Governor Andrew Cuomo and listed as “red zones” where infection rates from the virus were allegedly higher than average.

The rally that is scheduled to take place in Marin Park in Brooklyn will feature Boris Epshteyn, an advisor to the Trump campaign and co-chair of Jewish Voices for Trump.

Also addressing the rally will be former Brooklyn assemblyman Dov Hikind, who is founder and president of the Americans Against Anti-Semitism organization. Hikind represented Brooklyn’s 48th assembly district which included Borough Park for close to 35 years. Borough Park is a predominantly Orthodox neighborhood; with a large percent of Hassidic groups residing there. This past week, Hikind announced that while he did not vote for Trump in 2016, he plans to do so this year.

Along with Hikind and Epsheytn, another person who will address the Marine Park rally is AJ Catsimatidis, the chairwoman of the Manhattan Republican Party and the daughter of supermarket mogul and former candidate for mayor of New York City, John Catsimatidis.

JTA reported that “a recent poll conducted by Ami Magazine, which serves a largely Orthodox readership, found that 83% of Orthodox respondents plan to vote for Trump in the upcoming election, with just 13% planning to vote for Biden.”

The pro-Trump events geared for Orthodox Jews were heavily promoted on Twitter and various WhatsApp groups in order to get as many people out to these rallies as possible.

In addition, a brief video has been circulating in which Rabbi Shmuel Kamenetsky gives his endorsement of President Trump and asks that everyone vote for him as well.