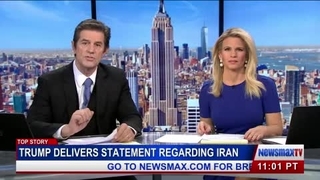 Newsmax TV is continuing to see its ratings soar, with close to 10 million cable viewers tuning in to the channel in August, according to Comscore data.

In a short time, viewer interest has pushed Newsmax passed well-known TV brands like Bloomberg, RFD-TV, GAC, and Discovery Life — as it positions itself to surpass networks like Fox Business, American Heroes Channel, and Destination America.

“The growth is even more remarkable when one considers we just launched our first prime-time show in July,” Ruddy said, noting that STINCHFIELD with veteran television broadcaster Grant Stinchfield will anchor the network’s prime-time program starting

Newsmax TV has live or original news shows airing from 8am to 10pm Eastern weekdays, and has launched significant daytime coverage on weekends. The network is planning a daily morning show to launch in the next 60 days, with more prime-time show launches expected soon.

Weekend nights are populated with a slate of Newsmax shows with the comedic Rob Carson’s What in the World, Diamond & Silk Crystal Clear, Michelle Malkin Sovereign Nation and social media star Benny Johnson’s The Benny Report.