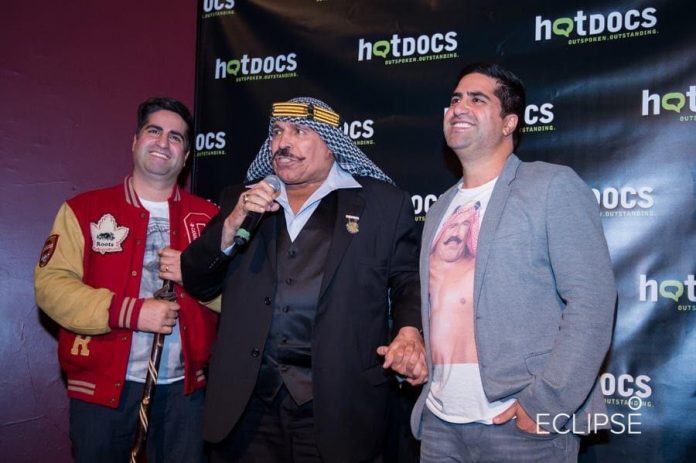 Jian and Page Magen are twin brothers, who are entertainment agents with Persian Jewish roots. In 2015 they produced a documentary about their close family friend Khosrow Vaziri, better known to pro wrestling fans as The Iron Sheik, entitled “The Sheik”. They spoke to the Jewish Voice about this fascinating movie and their connection with one of the greatest pro wrestling villains of all time, who’s life story is incredible. The pop culture documentary is a must-see for pro-wrestling fans and the non-fan as well. Khosrow’s story is truly one of a kind.

When did your family leave Iran?

As Persian Jews, our family had a beautiful life in Iran. They like many others had seen the writing on the wall with the revolution and left everything behind

Did your parents ever talk to you about how being Jewish was in Iran at the time of the last Shah?

OF course. Iran was a beautiful country that had so much

What is your family’s connection to Hossein Khosrow Ali Vaziri, The Iron Sheik?

Our father Bijan and The Sheik were world-class athletes in Iran. My dad played was a champion at table tennis while “Sheikie” amateur wrestling. They grew up in athletics together and formed an incredible bond. They were Best friends! When my dad immigrated to Canada the Sheik was already in America. It became so ironic that the only person he knew in North America happened to be the most hated man on television! Whenever the Sheik came to Toronto my parents would host a lot of the wrestlers over for dinner. My mom who is an incredible cook would prepare these unreal spreads that they all would go gaga for. It was really amazing to have this inside lens to the lives of these unique larger than life characters.

Tell us about the movie” The Sheik”, a documentary about The Sheik’s incredible life and career. How did it all fall into place?

Jian and I started promoting wrestling cards in college and we would always book our hero The Iron Sheik to be involved in our shows. As we started getting closer with him again, we realized that he could use help with his social branding and profile. While we were with him we started filming and documenting his journey as it was very fascinating. At the same time, he was in a very hard place in life. His daughter was murdered in a horrific situation, and Sheik was dealing with substance abuse issues stemming from the years on the road. We needed to help and started finding ways for him to get back on track. The journey shows this and allowed us to do the ultimate Mitzvah. To think that we were a part of our childhood hero’s journey is very magical to us.

Sheik, according to the documentary was all about wrestling, since he was a kid, he fled Iran during the Islamic Revolution. Has he ever discussed this time of his life with you?  Around what year was this?

Of course. We loved hearing these stories. He was so tough he was chosen to be the Shah of Iran’s bodyguard. This showed the level of toughness and respect he was given. Wrestling was the pride sport of the country. So he would be always in situations where he had to protect basically the King! He was trained by an iconic legend named Gholamreza Takhti. He was like Irans version of Michael Jordan or Muhammad Ali. Some claim that he was murdered because of his political activities against the Pahlavi regime. It was at this time that Sheik decided to flee the country. By 1970 The Sheik came to America.

The documentary goes into his entire pro wrestling career from his early days, till his peak and his twilight.  Was he surprised to discover what pro-wrestling was all about, going from an Olympic competing Greko-Roman wrestler to a larger than life, villainous pro wrestler, in the unique hybrid of sports and entertainment  Did he have an idea, or was it a shock?

He definitely learned the hard way. He also knew that there was no way to make a living with amateur wrestling, so he decided to give the same work ethic to be the best athlete in the room.  It was only hard because of the culture shock of the athlete in wrestling back then was not so much of ability but of learning how to entertain. He was ready because of his gruesome training in Iran.

The movie never touched on the fact that you and your brother are Jewish. Finding this out, made me love the movie even more. Watching your family come to Sheik’s house made me think about what was going on, a multi-faith gathering, Sheik’s wife, a Christian, his Jewish friends, and himself, a Shite Muslim.  Did you guys ever discuss religion and things like this?

He loves our Jewish religion. He loves all people. He definitely is not religious, but he believes in a god and just cares about the type of person someone is.

Without going into every detail in the documentary, lets’ talk about how social media generated renewed interest in The Iron Sheik, who was basically like a cult icon for an entire generation of people who grew up in the 1980s. Wrestling was huge in the era of the mid to late ’80s. Everyone, at least in my circles when I was a kid, loved wrestling. I’m 47, so I was watching at its peak and Iron Sheik was a central figure in the WWE. What happened when The Iron Sheik came to social media to communicate with all his Gen ex wrestling fans? Tell us about the social media re-birth of The Iron Sheik

It actually started on YouTube. We showed the sheik all that people were posting and how TV is now on a computer. He was very fascinated. When Michael Richards (Kramer on Seinfeld) was in stage at the Laugh Factory in LA was caught dropping racial slurs to the crowd we told Sheik to comment on it. He started ripping him to shred and Howard Stern of all people discussed it on his show. He said “we gotta get Sheik in the studio”.  The video got millions of hits. It went “viral”. Shortly after we got a call from his office to get the Sheik to the Howard Stern show.  He completely went off and it got him even more popular. His language is not for the faint of heart. It was wild.  So when Twitter came it was fairly simple to help him use his voice to share his opinion on topics that were topical. Add to that the nostalgia of such a recognizable character.   It was a match made in heaven!

What other projects are you and your brother working on?

We have partnered with an incredible charitable organization called Living Jewishly out of Toronto and have a slate of 4 documentary’s that focuses on Jews in different cultures and achievement. The first one is on the history of Jews in Professional Wrestling. It is quite fascinating and is telling an incredible story of the journey of a few in the industry. We are currently working on a bunch of fundraisers in the Virtual space, Shaare Zedek Hospital in Israel is a close client, and we are building Virtual content for them. We have Judd Apatow and Eugene Levy hosting our next event in Nov. While this is all happening, we have built a new business called Product For Purpose which focuses on selling items for Charities and raising funds for specific projects… It is all very fulfilling which is most important!

Does the Iron Sheik have anything to say to the Sephardic Jewish community in America and all the other Jewish people who read The Jewish Voice?

While being the ultimate Villain in Pop Culture- The Sheik has NOTHING but love in his heart for all people especially the Jewish community. He has always been a spiritual man that loved all people!

Israeli teen Deni Avdija drafted by Wizards at No. 9 overall