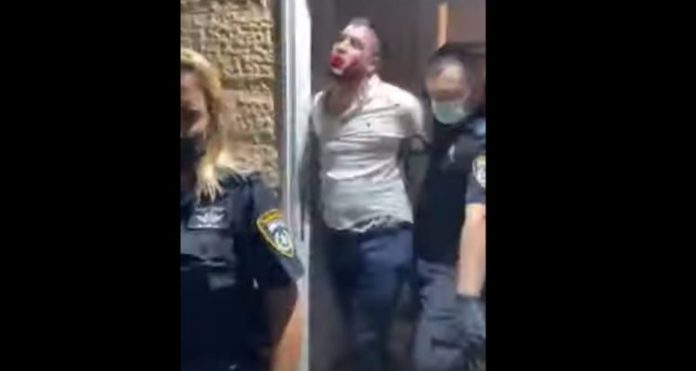 On Wednesday evening police were called to a private house in Givat Ze’ev, northwest of Jerusalem, after receiving 15 complaints of a gathering that violated coronavirus lockdown restrictions, Kan News reported. The restrictions limit gatherings to 20 people outdoors and forbid Israelis from traveling more than one kilometer from their home except for essential work or medical care.

Family members and people who attended the wedding claimed police violently broke up what they thought was a legal gathering, while police said they were attacked by guests who refused to stop the celebration.

A video taken by guests showed a large armed force at the wedding arresting people, with the brother of the bride led away in handcuffs with a bloodied head.

Police said the video showed only half of the story, and released body camera footage showing officers calmly informing the participants to break up the event.

Deputy Police Inspector Roi Waldman told Kol Barama radio that police deal with these situations all the time. He referred to another wedding that ended peacefully.

“When there are dozens of people, we can deal with it. This was the case at the wedding that took place in Beit Shemesh,” Waldman said. “The police requested people to disperse and they responded. In the case of Givat Ze’ev, people resisted and the incident escalated because police officers were attacked.”

Interior Minister Arye Deri said he was shocked by the videos, questioning how it resulted in “a happy wedding that ends with pictures with blood when policemen lead family members with guns.”

“The guidelines and instructions of the Ministry of Health must be observed, but from there to severe violence, I am not prepared to accept,” Deri said.

Police said one man at the wedding and one officer were lightly hurt in the incident, while the home owner, the father of the bride, was fined 5,000 shekels ($1500).

“I watched with pain the pictures from the wedding dispersal in Givat Ze’ev, and they are indeed difficult and unfortunate pictures,” tweeted Ohana, whose ministry is in charge of the police. “I asked the police to get all the relevant information quickly and we will release it to the public soon.”

The video of the incident provoked an outcry from ultra-Orthodox politicians who have been complaining about police abuse over enforcement of coronavirus restrictions in haredi Jewish neighborhoods around the country.

70% of Arabs say recognition of Israel likely, regardless of Palestinians

WATCH: ‘I know nothing about QAnon,’ Trump says

Police said the video showed only half of the story, and released body camera footage showing officers calmly informing the participants to break up the event.

Deputy Police Inspector Roi Waldman told Kol Barama radio that police deal with these situations all the time. He referred to another wedding that ended peacefully.

Israeli teacher went to protect his students, became victim instead

IDF soldier attacked in Jaffa, shots ring out in Lod