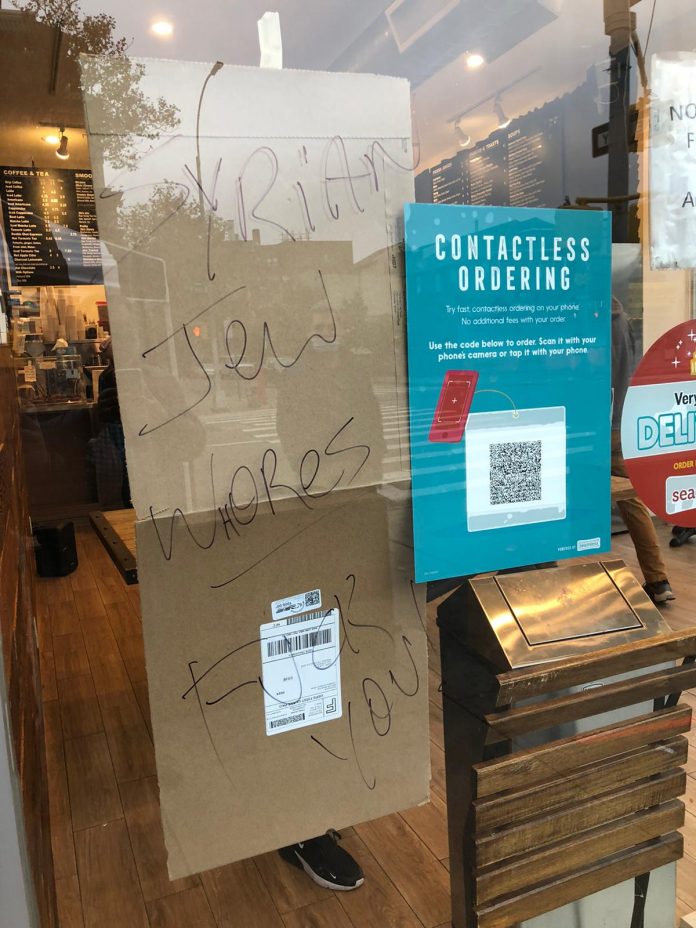 The despicable scourge of anti-Semitism has emerged yet again in Brooklyn, New York and local elected officials have taken up the gauntlet in strongly denouncing this vile form of hatred of Jews.

On Wednesday morning, October 28th, community members and politicians gathered at the Very Juice café on Avenue P in the Gravesend section of the borough after the owner of the establishment discovered a hateful message that was scrawled on the glass windows of the popular eatery.

On Tuesday, the words “Syrian Jew whores, F*ck you!” was written in marker on the window. The owner contacted the police upon discovering it and the vile message was erased. Thus far, it has been reported that no arrests have been made in the case that rocked an entire community to its core.

Elected officials who addressed the gathering at the press conference noted that Tuesday marked the two-year anniversary of the largest massacre of Jews on US soil. On October 27, 2018, a gunman named Robert Bowers walked into the Tree of Life synagogue in Pittsburgh and fatally shot 11 elderly Jewish worshippers who had gathered for Shabbat morning services.

In 2019, the number of incidents of anti-Semitism soared across the United States, according to the Anti-Defamation League (ADL). There was a 56% increase in assaults and 2100 acts of hatred were committed that specifically targeted Jews, along with five fatalities.

City Council member Chaim Deutsch told the assemblage, “Just yesterday, we commemorated two years since the devastating ‘Tree of life’ synagogue massacre when eleven of our brothers and sisters were slaughtered only because they were Jewish.” He added that, “We have seen anti-Semitism across the world, across our country and particularly here in New York City. When you look at the number of hate crimes in or crime, the highest influx is against the Jewish community.”

Councilman Deutsch also addressed the growing angst in the Orthodox Jewish community in Brooklyn over the harsh restrictions imposed upon them by New York State Governor Andrew Cuomo due to an alleged increase in coronavirus infections in predominantly Orthodox neighborhoods.

“The messages you hear today are the frustration and the anxiety of the community. It’s when our special needs children cannot go to school, it’s when our school children are not able to be educated, it’s when our businesses are shuttered and closed and bogus fines being handed out for not following the guidelines, “ said Councilman Deutsch.

Deutsch even pointed to the “rhetoric” of Governor Cuomo in targeting Jewish communities as a tragic reminder of virulent anti-Semitism in the chambers of government.

“The hate that we saw scrawled on the window of this cafe is only the latest example of the inexcusable anti-Semitic hate that we have seen and continue to see in this city,” said Brooklyn Assemblyman Simcha Eichenstein, who represents Borough Park. “This vile hatred can never have a place in our neighborhood nor anywhere in this world.”

State Senator Andrew Gounardes, who is being challenged for his seat by Vito J. Bruno in the upcoming election on November 3rd said,  “As we have seen from the rise in violent anti- Semitic incidents in recent years, rhetoric has consequences. We need to stand up, speak out and show that we will not allow hatred to fester unchecked, whether in the form of hateful vandalism at a beloved small business, online or a white supremacy  banner unfurled over Bay Ridge.” He added that “Hate has no place in Brooklyn or in our neighborhoods. Today, I am in solidarity with the Jewish community in denouncing the vile and disgusting vandalism.”

Also addressing the press conference was City Councilman Kalman Yeger, who also represents the Borough Park area.  “Anti- Semitism is not a new disease, but it is so clear that it is spreading, in no small part due to the harsh and dangerous light being shined on our community by the highest levels of government,” he said

Rep Max Rose (D-SI), another elected official who is in a hotly contested race to hold on to his seat in the House of Representatives said, “We must always unite as a community and stand against those who would seek to harm us, divide us, and incite hate. And we must continue to call for action, not words until every community in New York feels safe in this city.”