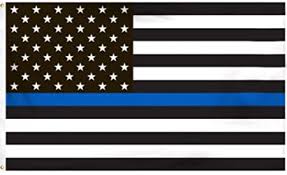 (TJV News) An elderly couple in Seattle, Washington, had their house shot at in a drive-by-shooting last Friday in what may have been a politically-motivated crime.

The home had a “thin blue line” American flag hanging in the front and the owners believe it played a role in their house being fired upon.

After “ACAB” (all cops are bastards) and “Black Lives Matter” were painted on the street in front of the house, the couple living at the home filed a police report.