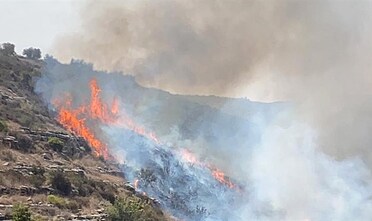 (Israel National News)The defense establishment suspects that some of the fires that broke out in Judea and Samaria on Friday were a result of arson by Palestinian Arabs.

The two main areas in Judea and Samaria in which fires broke out were the communities of Kfar HaOranim, Mevo Dotan and Einav.

About 500 families were evacuated from Kfar HaOranim and several houses caught fire. Residents were allowed to return to their homes a few hours later after the fires were extinguished.

Fires also broke out in dozens of different areas around the country, with the heaviest damage so far recorded Kfar HaOranim as well as in the city of Nof Hagalil (formerly known as Nazareth Illit).

Residents of Kibbutz Bahan, located in central Israel, were evacuated from their homes after the fires that broke out near these areas spread towards houses and endangered the citizens.

Police forces, IDF fighters and volunteers are assisting in the firefighting efforts across the country.

President Reuven Rivlin commented on the wave of fires across the country and said, “I follow with concern the updates on the fire in several hotspots in the country, and my heart goes out to the citizens who were evacuated from their homes at this time of anxiety and stress.”

Rivlin added: “I strengthen you our firefighters, see how hard you are fighting to stop the raging fires and pray that they will be fully extinguished soon.”

Yossi Dagan, head of the Shomron Regional Council, on Friday said that the fire raging in northern Samaria was a terrorist act.

“This is an act of terror in every sense of the matter. It should be treated as such from a security standpoint and as a political matter. We must apprehend the arsonists and treat this incident with all the seriousness of any other terrorist attack,” Dagan said.

US to allow ‘Israel’ on passports of people born in Jerusalem